Gaza and Israel Are at Another Impasse 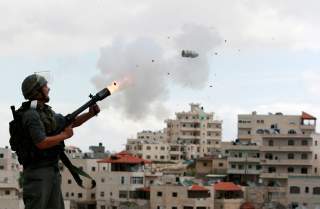 Neither Israel or Hamas want the present tensions in Gaza to spiral out of control into another round of full-scale fighting. The current round of friction was initiated by Hamas as a contained attempt to break the status-quo that is undermining its position and standing. All of Hamas’ recent actions are all designed to undermine Israel’s sense of security and signal the need for concessions that will improve the humanitarian and economic situation in Gaza. These have included a combination of mortar and rocket attacks deliberately targeted so as not to inflict fatalities. In addition, Hamas has also used incendiary kites and balloons to ignite fires on the Israeli side of the border and staged demonstrations along the border fence.

The Israeli military response to these actions is also measured in an attempt to contain any escalation. Retaliatory air-strikes to the mortar and rocket fire have been confined to low value “real estate” targets that do not kill Hamas operatives. Also, in response to the incendiary terror, Israel only attacked a number of empty vehicles belonging to Hamas ringleaders. At the same time, Israel continues to apply new defensive technologies to increase its denial capabilities against mortars and rockets, tunnels, drones, and infiltration attempts. While Israel is the first country in the world to operationally use its fifth-generation F-35 in a combat role it is also the first to employ electronic eye technology, such as the Sky Spotter, developed by Rafael, to track the trajectory of the primitive incendiary kites and balloons.

Intentions aside, the interactive military dynamics between the sides can easily spiral out of control. There are no guarantees that an incendiary kite, a mortar, a rocket or an air-strike will not miss their mark and cause fatalities leading to unintended escalation.

The periodical flare-ups of violence in Gaza inexorably lead to recurring political debates in Israel on how to stabilize the situation. The confrontationists support a more aggressive military response which will either re-establish Israel’s deterrence or lead to the retaking of Gaza and the ousting of Hamas. In previous articles, I laid out the strategic and military folly of re-occupying Gaza and destroying Hamas. In essence, in the absence of a clear and superior successor to a destroyed Hamas would either mean an open-ended Israeli occupation of Gaza or chaos—both detrimental to Israel’s interests.

The accommodationists, on the other hand, advocate advancing a long-term cease-fire agreement. In return for the lifting of the blockade on Gaza and the developing of its economy, Israel would be provided with security and the return of its citizens and the bodies of its soldiers being held by Hamas. The problem with this approach is that while it might buy time it would also empower Hamas to advance its enduring “resistance” agenda which would be extremely detrimental to Israel’s long-term strategic standing. Though willing to make tactical adjustments, Hamas’ ideological agenda remains constant. It seeks to take over the Palestinian arena and destroy Israel. Nothing Israel can do will change this basic disposition. Therefore, significant accommodating steps to alleviate present tensions—such as agreeing to a seaport—will be strategically damaging down the road.

The government of Israel has opted for a middle ground of preserving a weakened and deterred Hamas willing and able to maintain a cessation of hostilities. However, defining how to achieve this has remarkably not dominated Israeli policy-making since the previous round of hostilities in 2014 (Operation “Protective Edge”). Rather, Israel’s prevailing national security policies have been determined mainly by a preventive outlook. For instance, how does Israel prevent Gaza from escalating once again given the more serious threat from the Iranian-led entrenchment in Syria? How should Israel manage the humanitarian situation in Gaza without strengthening Hamas? Also, how can Israel avoid being seen internally as conceding anything to Hamas prior to the return of the bodies of slain Israeli soldiers, as well as the release of Israeli citizens being held captive by the terror group? Finally, there is also the question of how to avoid improving the standing of the Palestinian Authority.

Israel has, within the contours of its prevention-focused strategy, endorsed the political and humanitarian status-quo achieved at the end of previous hostilities. Accordingly, Israel’s policy-making process has been reactive, adapting at the operational and tactical levels to the emergent aggressive moves initiated by Hamas.

Though Israel recognizes that the humanitarian situation in Gaza is, as in previous hostilities, a major factor contributing to potential escalation, it has done little since 2014 to foster an improvement in those conditions. Israel’s leaders had intended that the humanitarian situation in Gaza would not be the trigger for renewed hostilities. For instance, developmental initiatives were discussed with Qatar and were partially initiated. However, as time went by, this part of Israel’s strategy has remained unrealized.

True, Hamas tapped into the humanitarian aid entering Gaza in order to strengthen its military capabilities. But Israel’s leaders have also stalled humanitarian measures so as not to be seen as improving the welfare of the Palestinians in Gaza while the remains of Israeli soldiers and its citizens are still held there. Having failed until now to accomplish this part of Israel’s strategy and in the face of the present tensions, Defense Minister Lieberman is now reported to be working on a Cyprus port plan which would include the construction of a pier. This plan would also include Israeli security monitoring and ferrying goods to Gaza. This would be offered for an agreement by Hamas to return the remains of Israel’s soldiers and civilians held by the group.

More than anything else Lieberman’s plan attests to the political inability to disentangle the humanitarian situation in Gaza from the issue of Israel’s missing remains and civilians. Considering the volume of assistance that could enter Gaza and the security considerations, the Cyprus option has no advantages over the use of a pier in Israel’s Ashdod port which is in close proximity to Gaza and the transfer of the aid by trucks. In essence, then, Lieberman’s proposal is all about allowing Hamas a symbolic achievement in the form of getting an official outlet to the outside world in return for the release of the remains of Israel’s soldiers and civilians held by the group. True to form, Hamas rejects releasing Israel’s missing citizens and remains unless Israel releases a large number of Palestinian terror activists from its jails, a condition politically unfeasible for Israel’s decision-makers.

The Israeli government has failed to implement important aspects of its approach to Gaza since 2014. This has led to a deterioration in the humanitarian and economic situation in Gaza that has led the Hamas to turn against the status-quo. This is because even though it fears the outbreak of full-scale hostilities, Hamas sees the continuation of the status-quo as a destabilization of its regional and international position. For sure, Hamas remains violently opposed to Israel’s very existence and needs no excuses in order to attack it. However, Israel’s deterrence of the organization works best when the humanitarian situation is not undermining Hamas’s ability to keep the quiet.

Furthermore, the absence of an effort to develop an alternative to Hamas’s control of Gaza makes the confrontationists’ threat to invade Gaza and destroy Hamas a self-damaging exercise. The accommodationists, on the other hand, mistake pragmatism for would-be moderation that is not going to happen. At this point of time, with other regional developments taking precedent over Gaza, the middle ground of a weakened and deterred Hamas is the best for Israel’s interests. This is because such a Hamas is also willing and able to constrain other armed elements in Gaza while also attracting regional humanitarian aid and reconstruction efforts. Such a situation is better than the other alternatives, and Israel hopes to keep it that way.

The tensions in Gaza are a reminder of the necessity to move from neglect of Gaza’s humanitarian and economic needs to the provision, in cooperation with Egypt, of the aid needed to avoid further escalation. This is a more practical and immediate course of action than the likely infeasible Cyprus port option.

Shimon Arad is a retired Colonel of the Israeli Defense Forces. His writings focus on regional security matters.

Image:  An Israeli border police officer fires tear gas towards Palestinian stone-throwers in East Jerusalem neighbourhood of Issawiya March 16, 2010. Dozens of Palestinian stone-throwers clashed with Israeli police in East Jerusalem on Tuesday on a "day of rage" Hamas Islamists declared in protest at Israel's consecration of an ancient synagogue in the city. REUTERS/Darren Whiteside (JERUSALEM - Tags: POLITICS CIVIL UNREST IMAGES OF THE DAY)