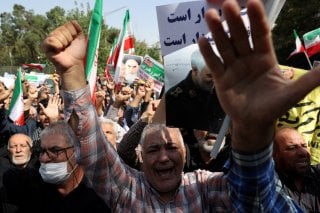 The world is witnessing another series of Iranian mass protests after the death of Mahsa Amini, a young Iranian woman who was killed by the “morality police” this month for allegedly not wearing her hijab properly. Countries raced to condemn her death while others imposed more sanctions on Iranian officials and entities.

It is not surprising that the Iranian government has not hesitated to crack down on these mass protests, including by using lethal force against demonstrators. This has raised questions about what countries can do to help the Iranians withstand this brutal assault. The United States announced last week that the Department of Treasury would issue the Iran General License D-2 to provide safe and reliable internet access to Iranians after the government cut off access. The primary purpose of the license is to modify U.S. sanctions on Iran to allow for more internet access. Elon Musk announced that his company, Starlink, is ready to provide secure and reliable internet access to Iranians. The protesters have welcomed these steps, however, it is likely to increase the Iranian government’s willingness to crack down on the demonstrations.

Unlike the war in Ukraine, where Starlink sent more than 15.000 Starlink terminals to help Ukrainians access the internet after Russia’s invasion, the Iranian government will not facilitate the delivery of Starlink kits. Technically, Starlink connectivity requires three components to provide fast and reliable internet: a small Starlink terminal, satellites, and ground stations close to end-users. However, in many cases, Starlink announced that its satellites are using laser transmission, which limits the need for these concentration points. As a result, Starlink will face logistical challenges in delivering terminals to Iranians and completing its connectivity cycle.

While it is unclear how Starlink and the U.S. government are planning to overcome this challenge, Tehran will do whatever it takes to reinforce its rule. Tehran has a long history of brutally suppressing protests and unrest since the 1979 revolution. In 2019, a special report from Reuters detailed how Iranian leaders orchestrated a sweeping crackdown on nationwide protests over gasoline price increases that resulted in hundreds of deaths. Official Iranian statements understated the death toll and argued that the West was promoting “fake news.”

This time, Iran has warned that providing internet to the protestors is a gross interference in its internal affairs. The Iranian government has sought to mobilize what it calls “loyal” citizens to show support for the regime in the streets.

Many experts have warned that the U.S. government’s promotion of internet access within Iran could escalate the situation domestically and internationally. Lifting U.S. sanctions to let technology giants such as Starlink step into the political fight could encourage Tehran to use harsher tactics against the protestors. The government will cite Starlink’s efforts as a reason to oppress the protestors by claiming that it wants to protect Iran from external influence.

On the other hand, negotiations between Iran and the West about the fate of the Joint Comprehensive Plan of Action (JCPOA), or the Iran nuclear deal, will be influenced by these events in three ways. First, the Iranian government’s attention will be diverted to handling this internal crisis. Second, Iran’s leaders will be more resistant to compromise and procrastinate to gain more internal political support for their negotiating position. Finally, Tehran could escalate by using its regional proxies in Lebanon, Syria, and Yemen to retaliate against the United States or its partners.

While the United States and the West want to support democracy in Iran, they cannot forget that Iran does not pay attention to the rule of law and the values of the rules-based international order. Instead, some experts have recommended that preventing the Iranian government from cutting internet access would be a better option than sending terminals into Iran. Forcibly sending terminals into Iranian territory, or even letting Iranians access the internet using concentration points in nearby countries, could worsen the government’s response to the protests. Aside from imposing more sanctions on the regime, the international community has few options to protect civilians on the ground in Iran.

The death of Mahsa Amini is an unforgettable moment in Iranian society; many young Iranians are calling for justice, freedom, and a new Iran that respects international law and cooperates with the international community. However, at this time, the protestors will likely be unable to achieve these goals. But when the Supreme Leader, Ayatollah Ali Khamenei, dies, the protestors can send a clear message that the next leader must address the needs of Iranian society.

Barbara Slavin, the director of the Future of Iran Initiative at the Atlantic Council, wrote in a recent analysis that “Whoever succeeds Khamenei, that person will have been thoroughly vetted for loyalty to the Islamic Republic and its practices. But a change at the top will still open the prospect for a different approach over time—if only because Iran’s region and the world at large are not static. The Iranian people have also evolved considerably since the 1979 revolution and will put pressure on any new leader to somehow accommodate those changes.”

Sending Starlink terminals or externally providing internet access to Iranians could lead the Iranian regime to escalate its crackdown on the demonstrations. What the protesters need is greater international diplomatic pressure put on the Iranian government and possibly the imposition of more sanctions. But interfering in Iran directly could end up harming the protestors more than the regime.

Marco Mossad has a Master's in International Relations with a focus on Cybersecurity, international security, and the MENA region.