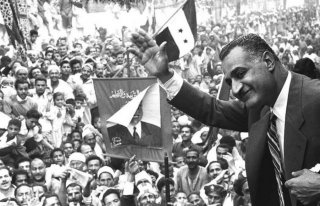 Joe Biden issued a statement over the weekend declaring America’s unwavering support for Israel. In doing so, he was joining a long line of presidents who have issued similar declarations in the past. However, before the third Arab-Israeli war in 1967, Israel’s relevance in America’s Middle East policy was less of a foregone conclusion. In fact, it was secondary to a policy of establishing American neutrality in the Middle East.

U.S. relations with Israel were complicated from the start. In November 1947, as the UN General Assembly considered a plan to partition Palestine into separate Jewish and Arab states, Harry Truman worked against his own State Department and the British foreign ministry, which sought to reduce the amount of the Jewish state’s territory. In 1956, after Israel colluded with Britain and France to invade Egypt, Dwight Eisenhower flexed American power by criticizing the two former European powers and forcing Israel to give up the territory it had acquired.

Eisenhower’s actions were guided by his administration’s efforts to form a relationship with Egyptian president Gamal Abdel Nasser, the leader of the most populated nation in the region. Officials under Eisenhower, including intelligence agents, had even worked with Nasser as he deposed the British-installed monarchy in Egypt. This close relationship between the United States and Egypt in the early days of Nasser’s government was short-lived after Nasser made it clear he had imperialist visions for Egypt. For his part, Nasser viewed the United States as a potential replacement for British colonialism in the region, especially since, according to the Eisenhower Doctrine, the United States could authorize “assistance and cooperation to include the employment of the armed forces of the United States [to the Middle East]… against overt armed aggression from any nation controlled by International Communism.” By the end of the Eisenhower administration, U.S. relations with Egypt were at a low point because of Nasser’s support for a military coup in Iraq in 1958 that toppled the monarchy, as well as Eisenhower’s decision to intervene in a civil war in Lebanon by sending in U.S. troops.

The mutual distrust between the United States and Egypt was compounded by the intricacies of the global Cold War. With the Soviet Union behaving like the Russian Empire it replaced and seeking to expand influence in the Middle East, Egypt became a particularly important axis point. Both the USSR and the United States viewed Egypt as the gateway to enjoying widespread access in the region. This assumption, in part, was based on Nasser’s popularity on the Arab street and his claims to represent a much larger “Arab nation.” What the two superpowers failed to realize was that Nasser was a committed Egyptian nationalist, and therefore would never fully commit to either side.

When John F. Kennedy came into office in 1961, he sought to empower nationalist leaders like Nasser. His thinking was that it was better to keep those leaders as far away from Moscow as possible, even if it meant they never got closer to the United States. For the Middle East, that job fell to an optimistic National Security Council Staffer named Robert Komer, who shared Kennedy’s enthusiasm for courting independent leaders like Nasser. However, Komer came to believe that these leaders could be persuaded to get closer to the United States through economic aid. Under Komer’s guidance, the United States gave Nasser an unprecedented three-year aid package in 1962. The goal of this approach was for the United States to be seen as a friend to both Israel and the Arab states—a neutral party in the region.

That strategy ultimately fell apart and led to the 1967 Arab-Israeli War. As dogged as Komer was in pursuing Kennedy’s policy, his instincts about Nasser proved wrong. Between 1962 and 1965, during the period of the economic aid package, Nasser got involved in the Yemeni civil war, turning it into a proxy war between Egypt and Saudi Arabia. Nasser also became involved in conflicts in the Congo and Cyprus, complicating American plans for neutrality in the region. The problems got worse when a dispute over water rights between Israel and the Arab states transformed into a show of Arab unity against the Jewish state with Nasser leading the charge. In doing so, Nasser broke his promise to Kennedy not to heat up the Arab-Israeli conflict.

In spite of these differences with Nasser, Komer still believed it was in Washington’s interest to work with him. He failed to see that as much as Nasser needed American aid, his nationalist stance would always pit him against U.S. hegemony. Adding to Komer’s difficulty was the fact that Lyndon Johnson viewed international relations in accordance with nineteenth-century imperialism and emphasized great power stature over strategic flexibility. In Johnson’s eyes, a power like the United States had to maintain its credibility by not being challenged by smaller powers like Egypt. During his tenure, relations with Nasser became so strained that U.S. diplomatic property in Cairo was attacked by a mob and set on fire. At one point, Nasser told the U.S. ambassador to “go drink from the sea” (a euphemism for “go to hell”).

The culmination of American efforts to fit Nasser inside the box of American hegemony was a breakdown in diplomatic relations in the months leading up to the 1967 Arab-Israeli War. Nasser refused to be told what to do by the United States, and Johnson overlooked Nasser’s repeated requests for aid in the wake of Komer being transferred to a portfolio concerning the Vietnam War. When the Arab states and Israel went to war in June 1967, Johnson sought to repair his relationship with Nasser, but he was too late. It was after the war that the United States abandoned a strategy of neutrality in the Middle East and became closer to Israel. Unlike Nasser and the Arab states, Israel appeared to be a consistent and willing partner to American hegemony.

This history could be instructive for understanding why the Biden administration has taken a supportive tone with Israel despite rising human rights concerns during the latest round of violence. In short, since 1967, good relations with Israel have been viewed by American presidents as a commitment. That’s why even George H.W. Bush, who saw nothing strategic about taking sides in the Middle East, said to Israeli Prime Minister Yitzhak Shamir that America “[is] unshakable in our commitments to Israel.” But nothing lasts forever.

The dawn of a new cold war between China and the United States means that the Middle East will continue to be a strategic landscape, particularly if China seeks to damage American dollar hegemony in the oil and gas industry. And the fact that it took one phone call from Biden to Egyptian leader Abdel Fattah Al-Sisi this week to broker a ceasefire between Israel and Hamas demonstrates America’s continued relevance in a region it continually tries to pivot from. Unlike during the competition between the USSR and the United States, Israel now has working relations with many of the Arab and Muslim states, particularly since it has positioned itself to lead a regional coalition against Iranian hegemony. To be sure, that makes Israel an important power broker. However, as Israel pursues immoral policies that subjugate the rights of its non-Jewish citizens and gets swept up in conflicts with the Palestinians that result in disproportionate and unpopular military responses, it’s possible that the United States might once again re-evaluate its relationship with Israel. The United States will have to make a determination whether its interests still align with Israel in a world where international image and ideology once again mean everything.

Gabriel Glickman is a nonresident associate fellow at the Begin-Sadat Center for Strategic Studies, Bar-Ilan University. He is the author of US-Egypt Diplomacy Under Johnson: Nasser, Komer, and the Limits of Personal Diplomacy (I.B. Tauris).