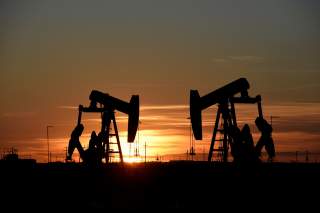 2020 is shaping up to be Iraq’s most difficult year since 2003 when the U.S. launched its shock-and-awe campaign to bring down long-time dictator Saddam Hussein.

Lawyer Alaa Kadhem described a perfect storm of political, economic, and social forces. A week ago, that might have been overwrought, but yesterday’s plunge in oil prices makes it a reality. The Iraqi government has suffered three strikes: a constitutional crisis, coronavirus, and now a plunge in oil prices. Iraqis are resilient, but they will now pay the price for their leaders’ populism.

The first strike against the Iraqi government has been widespread, popular protests. On October 1, 2020, young Iraqis took to the streets across Iraq in response to growing public unease with corruption and ineffectiveness in the Iraqi government. Iraqis both regularly vote for change and feel powerless. Consider that as Americans complain about Congress, we regularly return over 90 percent of our representatives to office. In Iraq, on the other hand, Iraqis return only about 25 percent of incumbents. The revolving door parliament, however, has not been enough to bring change because of a flaw in Iraq’s election system, one originally imposed by UN bureaucrats and U.S. diplomats concerned more with the short-term ease of organizing an election than the long-consequences of its misdesign. Iraqi political parties are organized by lists crafted by often unelected political leaders. In short, this means Iraqi politicians are more accountable to the unaccountable than to any constituencies. When the elections do occur—even when the rallying cry for the electorate is against corruption—the same political bosses horse-trade to distribute patronage across parties in a way that essentially disenfranchises the voter.

Adil Abdul-Mahdi was always a political chameleon. He was communist, then an Islamist, turned into a democrat, and finally presented himself as a technocrat. In each, he was ineffective. Abdul-Mahdi likely did not give the order for militiamen affiliated with pro-Iranian commanders to fire on the crowds on the street, but he did then try to deny culpability and cover up the atrocity. The outrage led to his resignation, but entrenched party interests deadlock over a replacement, months after the 15-day period to find a replacement has passed, and he still acts as a caretaker. The Kurdistan Democratic Party, for example, liked Abdul-Mahdi because he funneled billions of extra dollars in oil revenue their way. Kurdish leaders Masrour and Nechirvan Barzani are unwilling, also, to vote for any new reformist leader who will not unquestionably accept their nominees for ministerial posts. For the Kurdish leaders, patronage trumps Iraqi stability. This is why they imposed Fuad Hussein—former Kurdish President Masoud Barzani’s consigliere—upon Iraq as finance minister. Hussein had far less interest in reform, than in diverting money away from Baghdad and into the pockets of Barzani supporters. While Iraqi President Barham Salih—also a Kurd—has genuinely sought to promote reform, he is constitutionally limited, and parliamentarians as the beneficiaries of the old, corrupt list system have little incentive to reform themselves out of a job.

Also undercutting meaningful reform is Tehran. The notion that Abdul-Mahdi had truly left the Islamic Supreme Council of Iraq, the Iranian-backed political party in which he once worked, was nonsense. When I visited party headquarters ahead of his government formation, would-be ministers were coming to see party leader Shaikh Humam Hamoudi who was clearly the behind-the-scenes force putting the cabinet together on behalf of Abdul-Mahdi. Pro-Tehran politicos are willing to use the ballot box to achieve what they can but if it looks like they may lose, they turn to militias to impose through force of arms what they cannot achieve through the ballot box. Iraqis, however, are not easily intimidated and so even scores of deaths did not stop the protestors who regularly gather in some of Baghdad and other cities’ key squares.

Government inefficiency, corruption, ego, Iraq’s wasta (connections) culture will always likely hamper Iraq’s response to the coronavirus. As Mohammed Tawfiq Allawi struggled unsuccessfully to put together a government, some incumbent ministers encouraged their staff to rally publicly to demand the continuation of their tenures. Iraqi health officials might have discouraged large crowds, but the egos of Iraqi ministers did not believe that such recommendations applied to them.

The Iraq Oil Report has chronicled coronavirus problems within Iraq’s all-important oil industry: disruption of staff rotation in major oil fields and impacts of logistics and distribution of basic goods. But the potential economic problems for Iraq go deeper. Iraqis also face a choice between coronavirus prevention and cuts in revenue from pilgrimage trade which could impact the purses of some of the leading powerbrokers and decision-makers in Tehran, Najaf, and Karbala. Oil may account for the bulk of Iraq’s budget, after all, but it remains invisible to most Iraqis. The pilgrimage trade, though, means not only licensing fees, but impacts everyone from major investors in luxury hotels to restaurant owners, souvenir stands, and taxi and bus drivers, and even beggars.

Saudi Arabia’s surprise production increase announcement has sent the price of oil down more than $20 percent, to around $35/barrel. Riyadh’s action might be more geared to crippling Tehran, but the direct impact on Baghdad’s budget’s will be huge. More than 40 percent of Iraqis were born after the 2003 war, and almost two-third were born after Operation Desert Storm and the liberation of Kuwait. Put another way, whereas the Iraqi population was around 24 million when President George W. Bush declared the U.S. mission accomplished, by 2030 it will exceed 50 million.

Prime Minister Haider Abadi and his economist chief-of-staff Naufel Hassan planned for this eventuality to buffet Iraq against the volatility of the oil market by trimming bureaucracy and investing in the long-term. Hassan earned the moniker “awful Naufel” because he would regularly quash requests for short-term expenditure or bureaucratic expansion simply because neither he nor Abadi saw the long-term sustainability such huge bureaucracy. Abdul-Mahdi was the opposite. Essentially, he was a populist, seeking to buy hearts and minds when oil was high by paying off Iraqis with little consideration to sustainability. When Iraqis would make it to his office, they seldom left emptyhanded or with a request unfulfilled. That strategy did not help Abdul-Mahdi as the Iraqi appetite for more was insatiable. Younger Iraqis without the wasta to petition his office resented what they saw as the looting of their country, nor did they see the groundwork laid for an economy that could also benefit them.

Iraq was like a cancer patient who suddenly suffered a heart attack. The plunge in oil means that it is heading to life support with multiple organ failure. That does not mean that Iraq should be written off: Iraqis are resilient. But the status quo is not tenable. Iraq will change. With ample U.S. support, that change could be for the better. Iraq is a wealthy country that has suffered more than its fair share of tragedy. The young Iraqi generation seeks to break out of the situation in which they have found themselves. Populist prescriptions like a strong presidency may sound good on paper but will not work in practice; after all, it was a strong president which sent Iraq into the descent from which it now seeks to emerge. Lobby-fueled proposals to dump Baghdad to double down on Kurdistan are no better. Doing nothing would only privilege retrograde forces like Iranian-backed militias or Islamic State-type insurgents. Rather, given Iraq’s tremendous political, economic, and social transformation, it is time to re-engage economically and diplomatically to help Iraq reform its political and economic system to better achieve the stability and prosperity the new generation of Iraqis deserve.