Here's What a Trump-Putin Deal on Syria Could Look Like 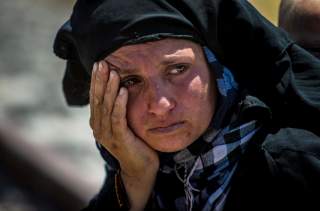 As the White House prepares for the July 16 summit between American President Trump and Russian President Putin, Syria will be on the agenda. President Trump has signaled his interest in winding down the U.S. military presence in that country's long and tragic civil war. In exchange, according to press reports, President Trump may ask Putin to contain Iran's influence in Syria, a huge gift given the scale of Iran's presence in the country, and the critical role it has played in the Assad regime's military gains since 2015. With such a promise by Putin, together with further progress in the fight against ISIS in the country's east, Mr. Trump might then declare mission accomplished and pull the United States out of Syria entirely.

This would be a major mistake for several reasons. First, Russia has broken too many of its commitments in Syria to take Putin's guarantees seriously. For example, Russia has been bombing opposition positions in southwest Syria in recent days even though it signed a de-escalation agreement with America and Jordan promising not to do so last year. Second, the degree of Russian leverage over Iran, or even over the Assad regime, is questionable. In the past, Iran and the regime have brushed aside Russian efforts to reshape the political and diplomatic landscape in Syria—most notably in dismissing Putin's recent statement that all foreign forces must leave the country.

Third, if the United States abandons any role in Syria, it will undermine just about the only remaining source of leverage the U.S. has to shape the trajectory of the Syrian conflict. In the midst of yet another barbarous regime offensive in southwest Syria, which is displacing additional tens of thousands of innocent civilians, turning America’s back and ceding the field entirely to President Bashar al-Assad would be a moral outrage. It would also sow the seeds for the resurgence of ISIS 2.0—just as Shia abuse of Sunnis in Iraq under Prime Minister Nouri al-Maliki gave rise to ISIS (“al Qaeda 2.0”)—in that country in 2013/2014. American officials may hope that the U.N.-sponsored diplomatic process in Geneva could rescue the situation by negotiating an end to the Assad regime and a new national unity government. But that story is a fairy tale. Assad, who holds most of the military cards in Syria now, has no interest in being negotiated out of power, especially in favor of a majoritarian government that would inevitably be Sunni-dominated—and thus quite possibly seek vengeance against Assad and his fellow Alawites.

Fourth, actions that signal that the U.S. is no longer concerned with the outcome of the conflict will make it far more difficult for Washington to help Israel, Jordan, Turkey, and Lebanon with the war’s ultimate fallout, and with the return or relocation of refugees. Additionally, it will make it much harder for the U.S. to influence the shape of any future regional security architecture and temper the influence of hostile actors in the Middle East.

Admittedly, seven and a half years into this tragic conflict, there are no good answers. However, some outcomes are much less bad than others. For instance, it is still realistic for the United States to help protect its Kurdish partners in the country’s northeast. Furthermore, America can secure some limited protections and temporary autonomy for friendly opposition forces and the populations they represent elsewhere. Moreover, it is important to begin reconstruction and the return of refugees in parts of Syria outside of the regime’s control. It is also possible to work with other countries to try to pressure Assad out of office over time in favor of a somewhat more tolerable successor. These steps will also reduce the odds of an ISIS 2.0 emerging, will limit (though hardly end) Iran’s influence in the country, and hold out at least some prospect of addressing the larger strategic effects of the regime’s victory.

The core elements of a strategy that would seek to achieve the above objectives, without significantly expanding the role of American military forces in the Syria conflict, should include the following:

- First, recognize that the Geneva process will not replace Assad with an elected government or a truly representative government of national unity.

- Instead, adopt the longer-term goal that Assad will choose his own successor, subject to approval by the international community, with a cabinet of advisors and ministers that would include individuals from the country’s other major regions and sectarian groups. Assad remains unlikely to accept such a compromise, but it may be the best America can hope for, and it is consistent with statements from Russian and Iranian leaders about the need for post-conflict reforms in Syria’s government.

- In the short term, use negotiations with Damascus and Moscow to pursue protections for various autonomous zones in opposition-dominated regions within Syria. This could start with the country's Kurdish northeast, which should be split into at least two such zones to mitigate Turkish worries about Kurdish secessionism. Similar autonomous areas should be pursued for areas mainly in opposition hands, notably in the country's northwest near Idlib, if possible.

- American and international assistance should then start flowing to these zones. However, except for very limited humanitarian aid, such assistance should not be given to the central government or any regions Assad still rules, until he steps down in the manner indicated above.

- American forces should stay on the ground in roughly their current numbers, to help with reconstruction and to ensure the autonomous areas remain secure until Assad is gone. In addition, U.S. funding for stabilization programming in opposition-controlled areas should be restored immediately.

- American and allied airpower should remain available, if need be, to retaliate against any regime or Iranian attacks on American or friendly positions.

The United States cannot be sure that Russia would agree to such a deal. If it did America cannot be confident it has the political capital to assist in carrying it out. But Russia does have incentives to end this war, too.

This type of pragmatic plan for Syria would protect America's friends and allies while allowing reconstruction and refugee return to begin, reducing the odds of a future extremist takeover. And it is certainly better than trusting Russia to evict Iran from Syria, or trusting Assad to show mercy to his own people. The emergence of an ISIS 2.0 or similar extremist movement could easily be the result of an abrupt American departure and therefore should be avoided.

Michael O'Hanlon is senior fellow and director of research in the Foreign Policy program at the Brookings Institution.

Steven Heydemann is the Ketcham Chair of Middle East Studies at Smith College and nonresident senior fellow in the Center for Middle East Policy at the Brookings Institution.

Image: A woman reacts as she rests from walking back to Tel Abyad town, Raqqa governorate, after fleeing Maskana town in the Aleppo countryside June 16, 2015. With a string of victories over Islamic State, Syria's Kurds are proving themselves an ever more dependable ally in the U.S.-led fight against the jihadists and building influence that will make them a force in Middle Eastern politics. Aided by U.S.-led air strikes, the Kurdish-led YPG militia may have dealt Islamic State its worst defeat to date in Syria by seizing the town of Tel Abyad at the Turkish border, cutting a supply route to the jihadists' de facto capital of Raqqa city. REUTERS/Rodi Said TPX IMAGES OF THE DAY