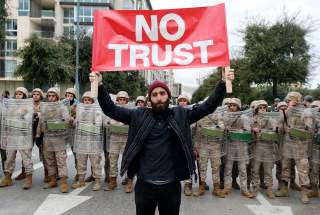 Flanked by continuous and brutal destruction in Syria to its east, Lebanon has served as a beacon of relative safety and refuge since 2011. However, for a country reeling from its own civil war in the 1980s, economic instability coupled with a sudden influx of refugees and political stalemate has finally proven enough to spark country-wide protests. Lebanon had been largely stable, despite taking in the most refugees per capita in the world until recently. The outbreak of mass, anti-government protests across the small Middle Eastern country underscores the deteriorating economic and political insecurities that have long troubled Lebanon.

Governmental overspending, an alarming corruption ranking of 138th globally, and one of the highest rates of inequality in the world have finally pushed Lebanese citizens to their brink. Perhaps, what is most remarkable about these protests are how they cut across the country’s deep sectarian and religious divides. Sunni, Shia, Druze, Maronite, Greek Catholic, Assyrian, Chaldean, and other groups are uniting and outrightly rejecting poor governance and economic mismanagement brought on by the leaders of all these sects. The tremendous complexity of Lebanon's political system has contributed to meager cooperation and ultimate inaction by governmental leaders. Delayed elections, budget authorizations, and cabinet decisions have been the norm for over a decade. The results are frequent power outages, improper sewage disposal, trash buildup in the streets, and the third steepest debt-to-GDP ratio in the world.

The final straw came in October when the government proposed a tax on Internet call services like WhatsApp, Facebook Messenger, and FaceTime. Protests erupted from Beirut to Tyre to Tripoli, as Lebanese citizens across sectarian divides flooded the streets and demanded greater accountability from their government.

The protests have highlighted just how out of touch the government is with an increasingly urban, technocratic and youthful population. The Lebanon of the 1980s, marred by civil war and entrenched in sectarian loyalty, is no more. Nearly 40 percent of the population is under the age of twenty-four. Meanwhile, the present Lebanese government is composed of essentially the same political leadership since 1990.

This is particularly relevant in the case of Hezbollah under the leadership of Hassan Nasrallah, whose popularity in Lebanon has waned since the Cedar Revolution in 2005. In the wake of the recent protests, Hezbollah is struggling to maintain control over a populous that is increasingly frustrated and at odds with old guard politicians. At stake is Hezbollah’s credibility as a political power player in Lebanon.

Hezbollah’s relevance is rooted in its identity as a Shia military power in Lebanon. Born out of the chaos of the Lebanese civil war as a Syrian-backed militia who fought Israel as well as the other Lebanese militias, Hezbollah was leveraged by Iranian and Syrian proxies to antagonize Israel and the West by supporting the Palestine Liberation Organization. With its funding from Iran and its ties to Syria, Hezbollah’s resources were considerable, enabling a robust hearts and minds campaign throughout the 1980’s. These resources and relationships are why Hezbollah managed to retain their militia arm postbellum.

Since the 1990’s, Hezbollah has adapted its political identity by involving itself in social causes and participating in legitimate, political elections. Its strength, however, is based on the premise that its Syrian-Iranian funded militia protects Lebanon against Israel. But in 2005, Syria assassinated Prime Minister Rafic Hariri. The resulting Cedar Revolution threw off the yoke of Syrian proxy-power in Lebanon. The world subsequently condemned Syria and the United Nations passed a resolution calling for Syria to withdraw officially from Lebanon and for Hezbollah to disarm. At the time, rather than condemning Syria, Nasrallah admonished Israel and the West for meddling in Lebanese affairs.

As Syria lost its foothold in Lebanon, Hezbollah began cross-border raids into northern Israel, ultimately kidnapping three Israeli soldiers and igniting the Israeli incursion into Lebanon. Many in the Arab world saw the 2006 war between Israel and Lebanon as an unnecessary provocation. The Israeli counter-attack and its subsequent destruction was blamed on Hezbollah. This is not to say that Israel was not abundantly vilified, especially for its decision to attack Beirut. Had Hezbollah not been so successful in repelling Israel, its reputation would have suffered a shattering blow. In reflection, Nasrallah admitted that Hezbollah's actions were imprudent, perhaps curtailing Hezbollah’s future willingness to antagonize Israel.

When the Arab Spring gripped Syria and opened the chasm of civil war in a country with its own history of sectarian violence, Hezbollah was called to support the Syrian government as a proxy-militia funded by Iran to help aid Bashar al-Assad. For Lebanon, this was a betrayal. Lebanon distrusts Syria as an aggressor and antagonist, despite the deep ties between the two countries. Hezbollah’s willingness to support the Assad regime degraded its legitimacy in Lebanon. Moreover, Hezbollah’s remaining military presence in Lebanon has waned as the majority of its fighting force were sent to Syria.

Now, today, in the wake of protests highlighting the toxicity of sectarian politics, Nasrallah has taken another grave misstep. The Arab Spring and the current crisis in Syria has done more than highlight the consequence of strong-man politics in the Middle East, it has also shifted the defining political agenda for the Arab world away from the Israeli-Palestinian conflict. By casting the current political climate in Lebanon as an Israeli-Western conspiracy, Nasrallah continues to echo a tired slogan that is falling more and more on deaf ears. Nasrallah’s unwillingness to recognize that the current political zeitgeist is not the same as the Lebanon of his civil war era political upbringing will eventually be the unraveling of the legitimacy of Hezbollah in Lebanon.

The resignation of Prime Minister Saad Hariri is just one step in a broader effort by protestors to topple and replace the entire government. Chants of “everyone means everyone” are also calls for removal directed at Nasrallah. However, the method Hezbollah is using to keep their political stronghold is the direct opposite of Hariri’s: cracking down on protests through brutal force. The aggression Hezbollah is wagering against protestors is indicative of the growing pressures it is feeling amidst the chaos. Public dissatisfaction and criticism of Nasrallah is spreading across the country and has damaged Hezbollah’s image and political support.

Moreover, any power play by Hezbollah would have economic and political repercussions for Lebanon as a whole. Hezbollah lacks the capacity to provide the basic governmental services protestors are looking for. Furthermore, new financial sanctions on the organization’s leadership and affiliated banks from the United States ensures any further political rise by Hezbollah would manifest a cultural embargo on the country at-large. In reaction to the chaos, the United States has already withheld $105 million in security assistance to Lebanon.

Politically, the new Prime Minister of Lebanon, Hassan Diab—a sixty-year-old, Hezbollah-picked Sunni—and his new cabinet, has basically been rejected by the Lebanese street as just another stooge for the existing power players, especially Hezbollah. The criticality of these protests is reaching a fever pitch as the economy continues to contract and Lebanon now is petitioning for up to $5 billion in loans to mitigate the existing financial crisis.

The protests do, however, pose a significant opportunity for the Lebanese people. For decades, the sectarian political structure in Lebanon was meant to ensure a tenuous peace amongst erstwhile ethnic and political rivals. The repercussion was political and social factionalization that has allowed the country to neither reconcile its violent history, nor move forward as a unified country—politically, economically, or socially. In trying to protect their political power in Lebanon, Nasrallah and the old guard of the country’s politicians now stand at odds with a new Lebanon.

Sunny Petzinger is the Middle East Analyst for the Center for Development and Strategy in Washington, D.C. and worked for nine years for the Secretary of the Air Force for International Affairs on Levantine and Middle East issues.

David Harary chairs the Center for Development and Strategy and is a Fellow with the Climate and Security Advisory Group in Washington, D.C. His writing has been published in the Bulletin of the Atomic Scientists, Slate, The Jerusalem Post, and the Wilson Center’s New Security Beat.