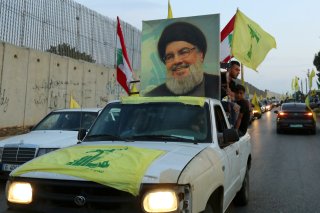 Hassan Nasrallah, the Shia cleric-turned-leader of Lebanon’s powerful Hezbollah militia, harshly criticized a number of proposals Kuwait made for improving Lebanon’s ties with the nations of the Persian Gulf.

“Lebanon is a sovereign country and should not be sent dictates,” the militia leader claimed in an interview with the Iranian Al-Alam television channel.

Although the list of proposals was not made public, sources familiar with the document claimed that they included points on improving the country’s security situation, cracking down on smuggling through the Port of Beirut, and successfully holding the country’s upcoming parliamentary elections.

Lebanon’s relationship with the Gulf Cooperation Council (GCC), the bloc of six wealthy Arab monarchies, has deteriorated over the past five years as Lebanon has weathered a series of political scandals. In late 2021, after it was revealed that former Information Minister George Kordahi made comments sharply critical of the Saudi-led military intervention in Yemen before his appointment, Kuwait and several other Gulf states severed ties with Lebanon, leading to Kordahi’s resignation.

As a proxy for Iran, the GCC states’ primary regional adversary, Hezbollah is also widely reviled in the Gulf. The group has also been tied to drug smuggling at the Port of Beirut, where millions of pills of “Captagon,” an amphetamine popular in the Gulf, are regularly received from drug laboratories in Syria and illicitly exported to the GCC.

In spite of these issues, Nasrallah told Al-Alam that he did not oppose Lebanese dialogue with Kuwait, claiming that a constructive relationship was needed between the two countries.

Lebanon’s politics were upended in early 2022 after Saad Hariri, a Lebanese business tycoon and former prime minister and the leader of the country’s largest Sunni political party, indicated that he would retire from politics and refuse to contest the country’s upcoming elections, citing concerns over Iran’s influence in the process.

Hariri, who was closely associated with Saudi Arabia in his early political career, briefly resigned from his position as prime minister during a trip to Riyadh in November 2017. That trip, which coincided with a purge of Saudi Arabia’s government during Crown Prince Mohammad bin Salman’s consolidation of power, was interpreted by some outsiders as a kidnapping attempt, and Hariri was reinstated to the prime ministership when he returned to Lebanon.

Nasrallah expressed displeasure with Hariri’s exit from politics, describing it as “unfortunate” for Lebanon’s stability.

“We were hoping it wouldn’t happen, but it happened,” he added.