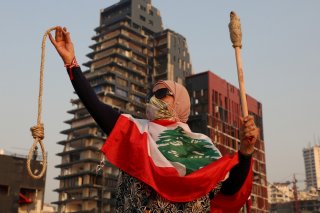 A month ago, explosions ripped through the port of Beirut, causing scores of deaths and injuries and wreaking havoc on a large chunk of the Lebanese capital. While the particulars surrounding the explosion are still being investigated, it is abundantly clear that the tragedy is a function of two primary factors: governmental incompetence and corruption, and Hezbollah’s misconduct as a result of its controlling interest in the country’s government.

Before the August 4 explosions, Lebanon was already staggering from crisis to crisis. Since October 2019, the country has experienced recurring national protests over endemic governmental corruption. The protesters indeed had a lot to be angry about; the exchange rate of the Lebanese lira on the black market had fallen by more than 80 percent (and continues to fluctuate), the country had defaulted on its international loans but failed to come to an agreement with the IMF over an economic bailout, and—since the outbreak of the coronavirus this spring—the government had failed to develop a coherent response to the health crisis. Nearly half the Lebanese population is struggling to make ends meet and suffering from food insecurity, according to the World Food Program, and hospitals in the country are failing to provide care to those infected with the coronavirus due to insufficient supplies.

The Beirut blasts undoubtedly added pressure to the already crippling malaise. According to Beirut governor Marwan Abboud, the explosions left an estimated 300,000 residents of the Lebanese capital homeless and caused some $4 billion in infrastructure damage—an amount that Lebanon’s dysfunctional government is clearly unable to pay.

Hezbollah, meanwhile, owns a large measure of the crisis as well. While the militia’s direct connection to the blasts remains a matter of some speculation, the links uncovered so far have increasingly called the group’s legitimacy as a state actor into question, and for good reason.

Over the past year, Hezbollah—while simultaneously serving as a proxy of the Islamic Republic of Iran—has managed to successfully rehabilitate its image from that of a “state within a state” into one of a largely legitimate political player. This growing stake, however, is turning out to be a double-edged sword; after all, greater legitimacy means Hezbollah should be held to the same level of responsibility as the country’s other leaders for the national failing economy and rampant corruption. But, like them, the Shi’ite militia doesn’t have any ready solutions to the nation’s ills.

Indeed, notwithstanding the depths of the current crisis, Lebanon’s closest allies have not stepped in to help. While Iran has a vested interest in preserving the power of its Lebanese proxy, the practical effects of the U.S. “maximum pressure” campaign have forced the Iranian regime to draw down its support for the group, leaving Lebanon’s already marginalized Shia population even more vulnerable—and Hezbollah itself increasingly desperate.

Nor has America come to Lebanon’s rescue, because—despite the historic relationship between Washington and Beirut—the U.S. government has progressively limited its ties to the current Lebanese one as a result of corruption and the latter’s permissive attitude toward Hezbollah’s pervasive influence in national politics. Meanwhile, the Gulf states, especially Saudi Arabia, have refused to step in and support the country because of its ties to Iran. France, Lebanon’s mandate power, only recently said it was ready to help the country overcome its current critical situation. But the government of French president Emanuel Macron has not yet taken concrete action to do so (despite Macron’s recent jaunt to visit the nation).

The Lebanese government, in short, has found substantive assistance to be in distinctly short supply. As a result, the country’s struggling regime is increasingly being forced to look east, to China and Russia.

For their part, both Moscow and Beijing are well positioned to help. Chinese goods already make up a significant portion of Lebanon’s total imports, and the country has steadily risen in importance for the PRC as a potential part of its sweeping Belt and Road Initiative. And if past practice is any indication, China will be all too willing to aid the Lebanese government without requiring the economic reforms or anti-corruption measures that would inevitably accompany assistance from the West.

Lebanon’s leaders have surmised the same thing. Back in May, the country’s then-culture minister, Abbas Mortada, signed an agreement with China’s envoy to Lebanon, Wang Kejian, to create cultural centers in each other’s countries. Later the same month, the People’s Liberation Army made a direct donation of supplies to the Lebanese Army as part of a new arrangement struck by Wang and Lebanese Army Commander Joseph Aoun. Beijing is scaling up its health assistance to Lebanon, too; since the start of the pandemic, China has taken pains to connect its doctors specializing in coronavirus with their counterparts in Beirut, and donated significant quantities of medical equipment to Lebanon’s overwhelmed hospitals. These overtures have left an impression; Lebanese officials have stated that there is now a “consensus” in government circles about the fact that the country should “go east.”

Russia is similarly well-positioned to be a partner. Over the past two years, ties between Moscow and Beirut have increased substantially, even as Lebanon’s distance from the West has grown. This has included stepped-up diplomatic contacts between the two countries, Russian provision of military aid to the Lebanese armed forces (to supplant funding frozen by the Trump administration) and—more recently—humanitarian aid from Moscow to assist Lebanon’s struggling health sector. Bilateral energy cooperation is also blossoming; earlier this year, Lebanon’s Ministry of Energy and Water gave the Russian state-owned oil giant Rosneft permission to manage the oil products storage terminal in Tripoli for a period of twenty years.

These contacts, in turn, are precisely the things favored by Lebanon’s most radical elements. In a speech on June 16, Hezbollah leader Hassan Nasrallah himself argued that Lebanon should explore alternatives to negotiating with the IMF, noting that China was prepared to invest in crucial infrastructure projects and inject money into Lebanon.

All of which should give Western policymakers pause. The current public policy debate over Lebanon revolves around the notion that the country—thoroughly corrupted and compromised—can no longer credibly be considered an ally, or even a good investment with its current leadership in place. That realization is becoming increasingly obvious as the Lebanese government watches from the sidelines, while social solidarity and grassroots organizations pick up the pieces in the country’s capital. But it’s also worth noting that Western retraction will carry with it concrete consequences.

Beirut, after all, needs to secure its stability from somewhere. And without the West involved, it will assuredly come from places like Moscow and Beijing.

Jessie Kaplan is a researcher at the American Foreign Policy Council in Washington, DC.