Hossein Dehghan Could Win Iran’s Presidency For The Revolutionary Guards 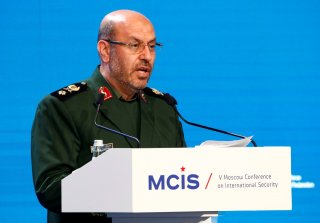 In 2001, then-Defense Minister of Iran Ali Shamkhani decided to run for the presidency. He launched a longshot bid, having never run for elected office, and faced off against his boss at the time, President Mohammad Khatami. Shamkhani, a former Islamic Revolutionary Guards Corp (IRGC) and Artesh, or Islamic Republic of Iran Army, naval commander, justified his candidacy by arguing it was time for a “military man” to ascend to the presidency, and that he had the “authority to take action instead of mouthing slogans.” He lost that race, but that campaign illustrates the intrigue surrounding the decision of another military man and his former deputy, Hossein Dehghan, to run for the presidency exactly twenty years later, in 2021. Dehghan has two qualities that have fueled his rise and make him an important presidential contender: skill in navigating Iran’s ideological spectrum and credentials spanning Iran’s armed, deep, and elected states.

Who is Hossein Dehghan?

Born in Isfahan in 1957, Dehghan was involved in some of the most consequential episodes in Iran’s fraught relationship with the United States. He played a role in the seizure of the U.S. embassy in Tehran in 1979. Dehghan was also the commander of the IRGC forces in Lebanon and Syria in 1983, which coincided with the bombing of the Marine barracks in Beirut, killing 241 U.S. service personnel—a fact the U.S. government highlighted when it sanctioned him in 2019. Dehghan had been on the U.S. radar in the 1980s. According to testimony before the U.S. Senate in 1985 by Nathan Adams, then an investigative reporter for Reader’s Digest, Dehghan coordinated “personnel, indoctrination, and training” of Hezbollah. Adams also revealed that Dehghan’s “dual control [was] the Islamic Republic’s embassies in Beirut and Damascus.” Dehghan therefore likely liaised with Iran’s then-Ambassador to Syria Ali Akbar Mohtashamipour, who directed attacks against U.S. interests in Lebanon during this timeframe.

Thereafter, Dehghan transitioned to the guardsmen’s burgeoning economic conglomerate. He briefly served as the head of its Cooperative Foundation. But he eventually found a landing spot in the administration of Mohammad Khatami as deputy defense minister under Ali Shamkhani. This move was significant as it was Dehghan’s first political appointment in Iran’s elected state. That Khatami entrusted him with this position was noteworthy. Dehghan rose through the ranks under Mohsen Rezaei’s tenure as commander-in-chief of the IRGC. Khatami had a tense relationship with Rezaei because of the latter's perceived support for Khatami's rival in the presidential race. As a result, Dehghan demonstrated his ability to maintain credibility among both conservatives and reformists.

While in office, Khatami came under fire by the IRGC for his handling of student demonstrations in July 1999. In an extraordinary letter, leading commanders of the IRGC accused Khatami of enabling anarchy. With their guardsmen pedigree and as members of the Khatami administration, this put both Shamkhani and Dehghan in difficult positions. But Dehghan didn’t appear to have lost any respect within hardline regime elements—he lasted for years as deputy defense minister, and was then named by Khatami and retained by his conservative successor Mahmoud Ahmadinejad as vice president and head of the Martyrs Foundation. Such an appointment also refreshed Dehghan’s network in Lebanon. As Will Fulton has noted, during his time as its leader, the U.S. Treasury Department sanctioned the Martyrs Foundation in 2007, showcasing its branches in Lebanon and revealing that “senior Martyrs Foundation officials were directly involved in Hezbollah operations against Israel during the July-August 2006 conflict.” Once again, beyond domestic politics, Dehghan showed a canny ability to maintain relevance on all levels of Iran’s hydra-headed state.

After Hassan Rouhani was elected as president, Dehghan was named as defense minister, a position that had been filled by IRGC officers in the past. His predecessor, Ahmad Vahidi, was a former commander of the IRGC’s Quds Force. Tellingly, Supreme Leader Ali Khamenei reportedly rejected Rouhani’s first choice for defense minister, Hossein Alaei, likely due to his past criticism of Khamenei. That Dehghan won Khamenei’s approval was a signal of his trust. Indeed, this confidence was confirmed when the supreme leader anointed Dehghan as his military aide for Defense Industries and Armed Forces Logistics after service in Rouhani’s first term cabinet. Such an appointment isn’t a given for former defense ministers. For instance, multiple former defense ministers, including Vahidi, never received that kind of advisory role in the Office of Iran’s Supreme Leader after their tenures.

In many respects, Dehghan can be considered a protégé of Shamkhani—both have served as defense ministers, commanders of branches of the IRGC, as advisors to Iran’s supreme leader, and have coupled such credentials with service in reformist and pragmatic governments. A new president with Dehghan’s breadth and depth of experience could prove to be a powerful negotiator for Iran’s regime—someone who can thread the needle across Iran’s armed, deep, and elected states—especially given the desire by both Donald Trump and Joe Biden for a more comprehensive deal. It’s a quality which was missing under Iran’s past and present presidencies—most especially with Khatami and Rouhani lacking the confidence of the IRGC’s most hardline elements. Dehghan, with his personal ties to the regime’s Axis of Resistance, could fill that credibility gap. However, his biography would be toxic in the West. Dehghan’s roles in the seizure of the U.S. embassy in 1979 and his tenure in Lebanon could complicate diplomacy with his administration.

Politically, Dehghan’s candidacy meets the criteria outlined by Iran’s supreme leader in his call for a “young and Hezbollah government.” On age, Khamenei expounded, “[s]ome people remain young despite their age. Martyr Haj Qassem Soleimani was 60 years old, but I would have kept him in the same position for another ten years if he was not martyred.” While Dehghan isn’t as young as some other potential candidates, he meets this standard as both Dehghan and Soleimani were born in 1957. Further, his association with the IRGC could very well establish a “Hezbollah government.”

Dehghan’s lack of previous political experience may pose some difficulties as he doesn’t have a natural constituency. But there is evidence he is positioning himself as a consensus candidate. In recent weeks, he has met with Mohsen Rezaei, Mohammad Bagher Ghalibaf, and Ali Shamkhani—all of whom held senior IRGC positions and some have been mentioned as potential presidential candidates themselves. Dehghan stands out among this group as he is the only one who has held positions in reformist, pragmatic, and conservative governments. Rezaei has been a perennially hardline candidate, Ghalibaf is a neoconservative speaker of parliament, and Shamkhani has associated himself with more centrist political currents.

While Iran’s presidential election in June 2021 is still months away, military men are actively positioning themselves ahead of the polls. Dehghan, with his multi-factional brand as well as diverse resume, is a figure to watch in the months ahead.

Jason M. Brodsky is the policy director of United Against Nuclear Iran (UANI). He is on Twitter @JasonMBrodsky.