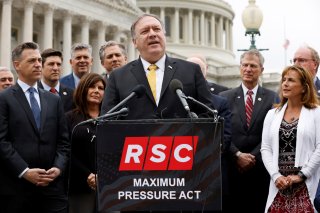 As the eighth round of nuclear negotiations between the United States, the other members of the “P5+1” coalition, and Iran continues in Vienna, Iranian officials have requested a guarantee from the United States that it would abide by any potential agreement well into the future.

On Wednesday, nearly 200 House Republicans wrote a letter to President Joe Biden indicating precisely the opposite: that if the deal was not submitted to Congress for its review, it would “meet the same fate” as the first agreement when Republicans retake control of Congress or the White House.

The letter explicitly rebuffed Iran’s demands, claiming that “as duly elected representatives … sent to Washington to check and balance the executive branch as established by the separation of powers in our Constitution, we feel compelled to remind you that you do not have the power to provide any such ‘guarantee.’”

“We will view any agreement reached in Vienna which is not submitted to the U.S. Senate for ratification as a treaty—including any and all secret agreements made with Iran directly or on the sidelines of official talks—as non-binding,” it continued.

To clarify their position, the letter’s signatories laid out a series of conditions for their acceptance of an agreement with Iran, including fully dismantling its nuclear enrichment and reprocessing capabilities, dismantling all nuclear-capable ballistic missiles, releasing all U.S. citizens imprisoned in Iran, and paying all U.S. federal court judgments filed by American victims of terrorism against Iran. As Tehran is exceptionally unlikely to agree to these concessions, the letter appears to be a firm denunciation of any agreement U.S. negotiators make with Iran in Vienna.

175 House Republicans signed the letter, which was authored by Reps. Mike Gallagher (R-WI) and Michael Waltz (R-FL). House Minority Leader Kevin McCarthy (R-CA) signed, as did Rep. Liz Cheney (R-WY), who was recently censured by the party for her participation in the House’s committee on the January 6 attack.

The original Iran nuclear deal, the “Joint Comprehensive Plan of Action,” was negotiated between Obama administration officials, the other P5+1 nations, and the administration of Iranian leader Hassan Rouhani in 2015. At the time, the deal was fiercely opposed by Republicans, who vocally criticized it as a delaying measure that would allow Iran to build up its financial reserves before resuming its pursuit of the bomb after the deal’s expiration date. In 2018, Obama’s successor, President Donald Trump, unilaterally withdrew from the deal and re-imposed sweeping sanctions as part of his “maximum pressure” Iran policy.