How Biden Can Stand With the Iranian People 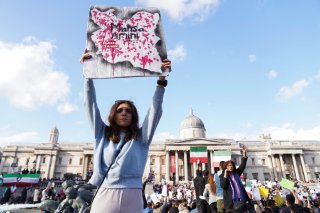 Concurrently, members of Congress can and should continue the string of letters, resolutions, tweets, and statements made in support of the Iranian people while also seeking to clarify or improve U.S. policy. Hearings about the administration’s human rights policy toward Iran, amongst others, can also be of assistance.

Sixth, the administration should support efforts to provide the Iranian people access to uncensored internet via satellite. As Iranians increasingly rely on the internet, social media applications, and mobile communications to organize and share the regime’s atrocities with the outside world, the Islamic Republic has improved its domestic cyber capabilities to censor and throttle or blackout the internet. With a reported 80 percent of Iranians already using virtual private networks (VPNs) and anti-filtering technologies prior to the start of the protests, measures to ensure connectivity are now a critical lynchpin.

Reports that Elon Musk is seeking to provide Iranians with Starlink is welcome news. To ramp up the production of Starlink terminals, an Iran Free Internet Fund (or similarly named entity) should be created under public-private auspices to offer Starlink financial support for an Iran-specific acquisition program. Washington can then create an interagency task force to oversee an operation to ensure that Iranians get access to the necessary hardware to make sure Starlink becomes operational, and sustain the costs of funneling this hardware into Iran over time. In the meantime, the U.S. government task force can help identify and contest regime or pro-regime hacker-led disinformation and hacking efforts to mislead Iranians about the current operational status of Starlink.

Seventh, the latest round of Treasury Department designations against Tehran’s petrochemical and oil smuggling networks raises hopes that at a very minimum, Washington may move towards greater enforcement of the sanctions penalties it has inherited and, until recently, decided to let atrophy. Since May, the Treasury Department has issued these penalties against networks supporting illicit Iranian oil and petrochemical producers, financiers, and shippers to the tune of one sanctions package a month. While these measures have been insufficient to elicit Iranian nuclear concessions or foster a change in behavior, a greater focus on Iran’s petrochemical exports is critical given their importance to the regime.

The administration should make sure relevant agencies are tracking these shipments so that Washington can move to confiscate, wherever possible and within the full extent of the law, illicit Iranian shipments. The funds generated from these sales can not only fund the aforementioned Iran Free Internet Fund, but also underwrite a strike and protest fund akin to what was done for Poland’s Solidarity Movement during the Cold War.

Eighth, the United States and many of its international partners have significant cyber capabilities that can be used to help protesters. In addition to targeting Tehran’s command and control systems from abroad, Washington can help the protesters in their efforts to move from street power to strike power. At present, protesters are facing challenges in sustaining a pincer movement against the regime. Labor strikes are currently ongoing in educational institutions across Iran, but they are slowly moving towards the service sector. Laborers in strategic sectors, such as the energy sector, are now threatening to go on strike. Disrupting the operations of these key sectors could give a much-needed boost to laborers and threaten the regime. Oil strikes were a critical factor that multiplied street power in the 1978-1979 protests that took down the Pahlavi monarchy in Iran.

Ninth, as protesters combat a well-equipped machine of oppression, Washington and its partners are likely already in possession of intelligence through signals and imagery that could possibly be shared with protesters via the Iranian opposition. Specifically, should Basij, IRGC, and LEF bases and command outposts be the subject of monitoring, then information on force deployments from these positions could be useful for Iranian protesters.

Tenth, as the Islamic Republic continues its crackdown on Iranians at home, it has been looking abroad to project strength. For the third time since protests began in September, Iran attacked Kurdish positions in northern Iraq. But unlike the first two days of strikes, on the third day, IRGC ground forces escalated to launch a reported seventy-three ballistic missiles at several locations in Iraqi Kurdistan, killing a reported thirteen people. This marks Iran’s second ballistic missile operation against northern Iraq in 2022, the first being a barrage in March against the home of a Kurdish oil tycoon, which Tehran claimed was an Israeli outpost. The recent operation even took the life of an American citizen, but Tehran has thus far only received condemnation from Washington.

Despite domestic unrest, Tehran has not taken its eye off of the Middle East’s proxy wars. Neither should Washington. In addition to the need to counter Iran’s weapons proliferation and terror funding, a greater kinetic pushback on Iran and its proxies could lead to concurrent and even reinforcing foreign and domestic vectors of pressure on the regime. Over time, this could help elicit or widen fissures among the security establishment, as they may be forced to debate priorities and have to consider reallocating funding, time, political attention, and other resources to each contest. Ultimately, sustained domestic and foreign cost-imposition to the Islamic Republic can shatter the image of invincibility that it has carefully cultivated among adversaries and allies

At the end of the day, the Iranian people are and will remain the stewards of their own destiny. But three weeks in, one thing is clear: the Iranian people deserve more support. This strategy offers Washington a way to get off the sidelines and show, in ways consistent with American national security interests, that it stands with the Iranian people in practice, not just principle.

Behnam Ben Taleblu is a senior fellow at the Foundation for Defense of Democracies (FDD), where Saeed Ghasseminejad is a senior adviser. Both contribute to FDD’s Iran Program and Center on Economic and Financial Power (CEFP), among others. The views expressed are their own.