How to Bring Iraq Back from the Brink of Self-Destruction 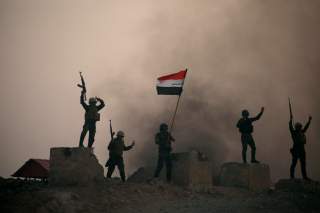 As the traffic jam and organized chaos at Kamal Jumblatt Square in Baghdad made clear during our visit last month, life in Iraq is steadily getting better. Gone are the concrete walls and checkpoints that snarled traffic. Fifteen years ago, there were few cars as the civil war raged. Three years ago, there were plenty of cars, but traffic kept moving. Now traffic surges—and sometimes halts briefly—during the midafternoon rush hour. Streets and restaurants bustle until the late hours. Electricity is still a problem—there are regular power cuts and some days homes get only eight hours of electricity from the grid. It’s a good time to be in the generator business. The capital’s water supply, which was so problematic during the war fifteen years ago, has vastly improved. Even in the second-largest city, Basra, senior government officials are congratulating themselves for improving infrastructure services enough that there was no repeat of the Basra riots of summer 2018.

The political process is hardly ideal, but Iraq in the past year has changed its president and its prime minister without major violence or arrest campaigns. There were peaceful protest marches against government inefficiency and corruption in many provinces earlier this summer and while security forces watched, they did not intervene. Recently, university graduates protesting in Baghdad outside government offices demanding jobs were hosed with water cannons. Iraqis active in political affairs who are outside the government have all told us there have been no arrests of government critics.

Iraqis are learning new political habits. It is slow; it takes years and probably generations. But when we think of what it looked like ten years ago, progress is undeniable. For example, the relationship between the government in Baghdad and the often-restive Kurdish region in the north are smoother due to efforts by Prime Minister Adil Abdul-Mahdi and Kurdish political operative Fuad Hussein, who is now the finance minister. President Barham Salih, who is also from the Kurdish region, has assisted with those efforts. During the U.S. occupation of Iraq, U.S. officials used to plead with the Kurdish authorities in the north to send delegations and representatives down to Baghdad to sit and work out deals. It was a hard slog. Now delegations go back and forth without American prodding. There is talk of a major political deal between Iraqi Kurdistan and the Baghdad government. The deal would involve Kurdish debts to foreign creditors and Baghdad control of oil export earnings. In Erbil we heard lingering bitterness at the Iraqi government’s response to the 2017 Kurdish referendum on independence, and there are still outstanding issues between the two parties that need to be worked out—most notably regarding oil and gas revenue sharing and the disputed territories. We also heard our Kurdish interlocutors emphasize that the failed referendum taught them that their independence must go through Baghdad.

When we attended a big political salon in Baghdad, we saw another hopeful sign of political evolution. During the civil war and its immediate aftermath, Shia Arabs, Sunni Arabs, and Kurds rarely mixed socially. There was a similar division between Islamists and more secular politicians. By contrast, the salon drew over a hundred men and women from a variety of backgrounds; we were surprised to see in attendance a prominent Sunni-Arab politician who was absolute anathema to the Shia in 2007. They were all there to listen to former Prime Minister Haider al-Abadi lead a broad discussion about the role of the opposition in Iraqi politics. The discussion that followed was polite, energetic and sophisticated.

It’s not at all perfect—far from it—and the progress that has been made is fragile, which is something we heard constantly. There were two big issues in particular that everybody spoke about openly. The first was corruption, which is where Iraq can compete with the world’s worst. After the 2003 invasion, the Americans set up a somewhat clean government affairs agency that was now moribund at best. The health minister, a program manager who worked for the World Health Organization, has just resigned and returned back to Geneva; on his Facebook page he said he had to quit because he could not get political backing to tamp down on corrupt procurement practices in his ministry. Abdul-Mahdi was unable to defend him because he was indebted to the political parties that feed at the corruption troughs in the various ministries they control. None of the many Iraqi officials we met could come up with a plan that would begin to address the gangrene of corruption.

Iran and its various militia allies are deeply enmeshed amid the corruption, especially Iran’s Shia Popular Mobilization Forces, which have formed political parties that now dominate parts of the government. The prime minister’s leverage on Iran is limited. We heard that his top advisors were closely tied to Tehran. We heard repeatedly that the Iranian Revolutionary Guard Corps Quds Force commander, General Qassem Soleimani, maintains an office in Baghdad that he visits regularly. The prime minister’s writ doesn’t go far. Several times we heard the story of his failed July 2018 effort to dislodge a militia’s checkpoints outside Mosul. The prime minister eventually had to accept the militia remaining in place. All he could secure was that Iraqi federal forces would set up a checkpoint near the militia’s checkpoint. The Americans have imposed sanctions on the militia but its checkpoints are still there today—and the militia is still collecting fees. As Iran’s financial resources have diminished under American sanctions, the pro-Iranian militias have established their own businesses and smuggling rings to assure their financial viability. And they get substantial Iraqi government revenues for being part of the Iraqi security establishment. Meanwhile, government moves to contain the militias are halting at best. Interestingly, at the political salon, Abadi highlighted the need for the Iraqi state to monopolize its armed forces. He stated this in front of the Iranian ambassador, who was also in attendance. The implication of the pro-Iranian militias was obvious.

We heard two requests from all the Iraqis we met. Of course, they hoped the United States would not go to war with Iran. They did not think their country could long manage being in the middle of such a conflict. On September 25, the Iraqi prime minister traveled to Saudi Arabia to discuss with King Salman bin Abdulaziz Al Saud the role Iraq can play in easing tensions in the Gulf region. They also asked that we sustain our engagement, our dialogue, our military assistance, and our low-cost, soft-power efforts. Iraqis highlighted that there are areas where Iran cannot help Iraq at all—such as education, reform, development of the banking sector, and absorption of technology in the economy. Everyone we met in Baghdad and Erbil, including Iraqis with deep connections to Iran, understands that Iraq benefits from relatively balanced relations with both the United States and Iran. They don’t want to be put in a position where they have to choose between the two countries. We probably won’t like the result if we compel them to do so.

Going forward, the U.S. relationship with Iraq cannot be solely about competing with Iran and setting benchmarks for so-called Iraqi independence from Iranian influence. (We have yet to see an American benchmark that ever helped anything in Iraq.) Nor should U.S. relations with Iraq be about fleeing from the 2003 decision to invade Saddam Hussein’s Iraq. What’s done is done. Instead, the United States should be thinking about working on the margins with like-minded Iraqis to help the wobbly political system gradually extend its roots and its stability. An unstable Iraqi political system won’t reduce Iranian influence and it won’t benefit stability in the Middle East or international energy markets. Iraqi instability won’t diminish extremism in the region either. There are some positive indications and some negative ones in the evolution of Iraq’s politics. Iraq’s success is not assured even with our attention and help going forward. But Iraqis tell us that without that attention and help, however, their fledgling efforts at good governance, reconstruction, and peaceful relations with all the neighbors would fare far worse.

Robert S. Ford is senior fellow at the Middle East Institute and Kissinger Senior Fellow at Yale University’s Jackson Institute for Global Affairs. He worked at the U.S. Embassy in Baghdad from 2004 to 2006 and 2008 to 2010. From 2011 to 2014, he served as U.S. Ambassador to Syria.

Randa Slim is director of the Conflict Resolution and Track II Dialogues Program at the Middle East Institute and nonresident fellow at the Johns Hopkins University School of Advanced and International Studies Foreign Policy Institute.