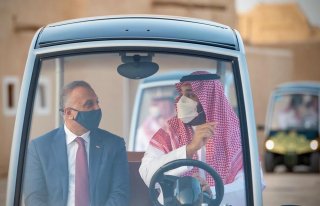 What could President Joe Biden be thinking? The president recently caused major controversy with his reversal of policy toward Saudi Arabia—most prominent among them his decision to sanction key officials connected to Khashoggi’s killing. The steps led critics of the Biden administration to worry that the White House could upend the decades-old strategic partnership between Washington and Riyadh, and Biden’s supporters to say that hadn’t done enough to hold Saudi rulers accountable.

Yet the approach ultimately chosen by Biden, to release an intelligence report pinning the blame for former journalist Jamal Khashoggi’s death on Saudi Crown Prince Mohammed bin Salman (or MbS, as he is commonly known), while sparing him from personal sanctions, may prove to be a shrewd one. After all, if America’s goal is to foster a freer and more stable Middle East, then preserving ties with MbS was the right call.

Recent history presents important lessons on how the United States can effectively promote freedom overseas. In a 2009 paper, political scientists Jay Goodliffe and Darren Hawkins argued that world leaders often make policy in reaction to their “dependence networks,” which are comprised of their closest trade partners. “Domestic policies and even entire domestic political systems, such as democracy, are influenced by the actions of other states,” they wrote. In other words, we can effectively shape the behavior of other countries by pulling them further into our orbit.

This might seem like an intuitive finding, but it has important ramifications for U.S. policy in the Middle East. America must often choose between two unsavory options when confronting the region’s dictators: befriend them or push for their removal. The latter option has virtually never born fruit. The Bush administration’s decision to topple Saddam Hussein had catastrophic consequences for Iraq. And Barack Obama’s intervention against Libyan dictator Muammar el-Qaddafi produced a hotbed of violence and extremism that lingers to this day.

On the other hand, regional governments that have enjoyed U.S. support have tended—in the main—to be more stable and, in some cases have become more politically open. For instance, in recent decades, close U.S. allies like Morocco, Jordan, and Kuwait have been islands of relative calm in a region that has repeatedly erupted into chaos. These countries have even experimented with political reform, and are now among the freest societies in the Arab World.

In dealing with MbS, the United States faces a familiar choice: continue to work with him or press for his ouster as crown prince. Slapping sanctions on the royal would send the message that America is unwilling to recognize him as Saudi Arabia’s leader, pressuring his father, King Salman, to appoint a different successor. That is something that is not within the power of Washington to demand, however, and would have the effect of trashing our relationship with the Saudis.

Yet, as the most important member of Saudi Arabia’s “dependence network,” America could have a significant voice in the kingdom’s future if it continues to work with MbS. No other great power shares Saudi Arabia’s hostility toward Iran, and the crown prince has relied heavily on western support and investment to lay the groundwork for his comprehensive plan for the country’s future, known as “Vision 2030.” Moreover, as part of this effort, the crown prince has already demonstrated his willingness to liberalize the economy, loosen social strictures, and significantly shift both political and cultural attitudes—steps that would have been unthinkable just a few years ago.

To be sure, MbS has also demonstrated violent and despotic instincts, and America should do everything it can to discourage them. But there are ways to do so without demolishing America’s historic relationship with the Saudis. Continuing to thread the needle between penalizing the kingdom for its excesses and encouraging its political evolution may be the most effective way to steer Saudi Arabia in the proper strategic direction.

Dan Harker is a researcher at the American Foreign Policy Council in Washington, DC.