How Far Will Iran’s Protests Go? 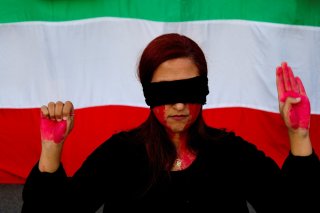 The protests that overtook Iran after Masha Amini, a twenty-two-year-old Iranian Kurdish girl, was killed have now spread to more than eighty-five large and small cities. Unlike the protests of 2009, in which Iranians objected to the legitimacy of their elections, or 2017 and 2019, which were based on economic issues and mainly organized by the poor, the current upheaval is more extensive, and outrage has brought together Iranian across social groups.

Indeed, during the protests of the last month, social and political issues have converged. What began as outrage against mandatory hijab evolved into a broadside against the ruling system.

Emad Afrogh, the former chairman of the Cultural Commission of the Iranian Parliament, told Iran’s Jamaran News that protestors are demanding flexibility on both the hijab and in the system in general. However, he also observed that people are also demanding broader change; society, poverty, inequality, unemployment, and discrimination are rampant. Iranian society is inundated by problems and looking for solutions.

The protests’ central slogan, “Women, Life, and Freedom,” is also revealing. Women have played a central role in the protests, and their demands for reforms have encouraged the emergence of a collective societal consciousness of the challenges Iranian women face. However, as Slavy Žižek has observed, the protestors’ full demands are broad. They are not against men; they are comprehensive and inclusive in that they pertain to issues that affect men as well. The protests are now about the rights and recognition that are due to all Iranians.

The protests’ leaders are not only members of the middle class but also very young, with an average age of seventeen to twenty years old. The presence of these young people has also engendered admiration from other Iranians. For example, public figures like Nasrullah Hekmat, an Iranian philosopher, and Soroush Sehhat, a director, praised Iranian students and young peoples’ participation in the protests, noting that they had “learned lessons” from their “courage.”

But why is it that today’s Iranian youth object boldly and bravely and eschews conservatism like those Iranians who came before them? Media Professor Shahindokht Kharazmi considers this generation to have been brought up in the era of sustainable awareness and digitalism and says they have learned how to deal with and pursue their demands in video games. This generation is ready to play until they win. One cannot talk with this generation with the language of limitation and filtering and expect success.

Be that as it may, it is notable that the protestors have not called for reforming Iran’s existing political system, which shows how frustration has increased, especially among the middle class, with the discourse of reformism. Indeed, today’s youth are largely disconnected from the reformist movement.

The educators of today’s youth belonged to the 1970s and 1980s, whose childhood and adolescence were in war, closed spaces, and political and social restrictions. A generation that grew up in the absence of the Internet and did not have the possibility to compare itself with the world; a generation that has tolerated and sometimes institutionalized any type of oppression and whose protests occurred in the absence of internal or external channels through which they could be heard. The participation of the middle-class in the 1997 presidential election was their first widespread demonstration against the existing political order. It was intended to reform the system.

Yet this effort failed: the reformists in power turned their backs on their ideals and preferred to stay in power over fulfilling the real demands of the youth. This resulted in middle-class Iranians becoming disillusioned with reformism and reformists and even the discourse of moderation led by Hassan Rouhani. This issue showed itself in the 2020 parliamentary and the 2021 presidential elections, when middle-class Iranians’ decision to boycott the elections expressed their disappointment with reformism.

Now, the children of this generation, that is, the youth of the 2000s, express their protest against the political system in their own way. This is a generation that is disconnected from the common history of its parents’ generation that sought to support the reformist movement. This new generation has not played any role in the existing order; it is only a victim.

According to Iranian theorist Maghsoud Farasatkhah, today’s youth have been denied the freedom to choose their lifestyle, find suitable employment, and live in favorable economic conditions. Instead, they exist in a state of rampant inflation, gender and religious inequality, and repressive social and information control. The politics of young people’s lives have become the politics of resistance.