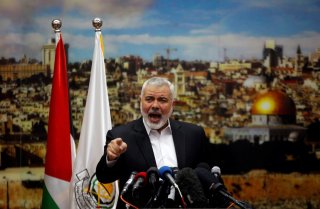 Consider the case of Matthias Schmale, UNRWA’s director of operations the Gaza Strip, who is now persona non grata and forbidden to return to Hamas-ruled Gaza. Schmale’s crime was telling Israel’s Channel 12 that Israeli attacks on Hamas installations were precise: “I’m not a military expert but I would not dispute that. I also have the impression that there is a huge sophistication in the way the Israeli military struck over the last 11 days.” Schmale also denied that there were shortages of food and medical supplies in Gaza.

Despite saying that “So yes they did not hit, with some exceptions, civilian targets, but the viciousness and ferocity of the strikes was heavily felt,” Schmale’s remarks produced outrage among Palestinian factions, including Hamas, which stated his “comments are a complete distortion in favor of the Zionists including an attempt to exonerate the Occupation of the murder of 254 Palestinians, more than 40% of them children, women and the elderly.” Other Palestinian factions quickly argued that Schmale was “a major reason for the suffering of thousands of Palestinian refugees and UNRWA employees in the Gaza Strip.”

Of course, Schmale apologized via Twitter. “Recent remarks I made on Israeli TV have offended & hurt those who had family members & friends killed & injured during the war that has just ended. I truly regret to have caused them pain, & reiterate following points I have made through countless interviews & tweets.”

Perhaps fortunately, UNRWA superiors then recalled Schmale and his deputy to Jerusalem for “consultations.” UNRWA’s Deputy Commissioner Leni Stenseth quickly took over as temporary head of operations in Gaza. Her first move was to meet with Hamas, where she "thanked the head of the Hamas movement in the Gaza Strip, Yahya Al-Sinwar, for his positivity and desire to continue cooperation.” She also added that Schmele’s comments "cannot be defended."

Previous episodes of truth-telling about UNRWA have produced similar results. Back in 2010, during a speech to an Arab American group, Andrew Whitley, the outgoing head of UNRWA's New York office, stated the obvious, "We recognize, as I think most do, although it's not a position that we publicly articulate, that the right of return is unlikely to be exercised to the territory of Israel to any significant or meaningful extent... It's not a politically palatable issue, it's not one that UNRWA publicly advocates, but nevertheless it's a known contour to the issue."

UNRWA's reaction was swift, saying “UNRWA unequivocally distances itself from the statements made by the director of its office in New York, Andrew Whitley, at the National Council on US-Arab Relations in Washington on October 22, 2010. These statements in no way reflect the policies or positions of the agency and are the personal views of Mr. Whitley.”

UNRWA’s code of silence can be explained in several ways. For one thing, too much money and too many careers are at stake—$806 million in 2020 and some 30,000 employees. Its leaders, therefore, cannot in any way jeopardize the narrative of UNRWA’s indispensability to perpetual Palestinian “refugees” who are allegedly faced with unrelenting Israeli violence.

In this view, UNRWA symbolizes the international community’s “debt” to the Palestinians for allowing Israel to be created and to exist today. UNRWA’s role in promulgating the destructive myth of the “right of return” is a way to perpetuate Palestinian grievance and thus its own existence.

But at another level, UNRWA, including both its international and Palestinian employees, are simply hostages, partly of their own making. Like other totalitarian governments, the atmosphere of harassment and intimidation created by Hamas is real and palpable. Having seen Hamas throw its political opponents off of buildings and dragging their bodies through the streets is highly instructive. For this reason, Western media had little to say when observing Hamas operatives dig up water pipes for conversion into missiles or constructing miles of tunnels under Gaza. Nor did the Associated Press need to be reminded to ignore Hamas facilities in their shared building. Antagonizing the hosts with the truth can be self-destructive.

When access is everything, Westerners willingly make themselves hostages. And when the truth slips out, access is lost and apologies flow. Matthias Schmale’s accidental candor cost him a job, but fortunately not his life, but Leni Stenseth seems to have smoothed things over with Hamas. With $150 million of renewed U.S. funding and yet another “emergency appeal” from UNRWA, the stakes are high, but truth seems unlikely to reappear soon.

Alex Joffe is a senior non-resident scholar at the BESA Center at Bar-Ilan University.

Asaf Romirowsky is executive director of Scholars for Peace in the Middle East.