How the Middle East Thinks About Great Power Competition 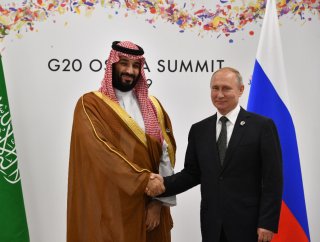 Russia and China have had a long, complicated history, but they have nevertheless formed a strong bilateral relationship in the twenty-first century. Following the foundation of the People’s Republic of China in 1949, the two states came together because of their admiration of and devotion to Marxist ideology, strengthened by a thirty-year alliance treaty signed in 1950, which enabled cooperation on the security, military, economic and technological fronts.

A shared border and differences of opinion over Communist doctrine led to open hostilities between Russia and China in 1969, which resulted in Mao Zedong’s effort to normalize ties with the United States in the early 1970s. Relations resumed after the 1989 Sino-Soviet Summit, followed by an acceleration of ties until the present day. Key moments in the relationship include Russia joining the China-led Shanghai Cooperation Organization in 2001 and the two states reaching a resolution to their border dispute in 2004. China’s refusal to condemn Russia’s annexation of Crimea in 2014 further strengthened the relationship. And on February 4, 2022, at the opening ceremony of the Winter Olympics in Beijing, only days before Russia’s invasion of Ukraine, the two heads of state held talks and issued a joint statement confirming that friendly ties are continuously developing.

The main reason for Russia and China’s alignment is undoubtedly their shared rivalry with the United States, as well as a mutual desire for an international order not led by the United States. Today, both states are major actors in addressing major global issues, and they have created a solid camp of their own. This is particularly apparent in a world that is straying away from the unipolar model.

Nevertheless, Russia and China have different Middle East policies. China’s approach to the region is more centered on trade and economic cooperation, with the Belt and Road Initiative passing through parts of the Middle East. China’s position as an economic behemoth gives it leverage over political issues, most notably in Africa. On the other hand, with the exception of the energy market, Russia’s economic strength is incomparable with China’s, and Russia’s statecraft is focused more on influencing foreign policy through hard power. Nevertheless, the U.S. military presence in the Middle East is unmatched, and both Russia and China lag behind Washington on security issues.

Although geographically distant, the war in Ukraine has been the most recent test of how Middle Eastern leaders will react to global competition between great powers. Russian lobbying in the Middle East increased in the first half of the year, as shown by Foreign Minister Sergey Lavrov’s bilateral and multilateral engagement in the region. This sparked a response from the White House, with President Joe Biden visiting Israel and the Gulf months later. This delayed response was understandable from a U.S. policy perspective: as Israel and the Gulf states have deep-rooted ties with the United States, the relationships are not at immediate risk.

The Gulf states are also some of America’s closest and oldest allies in the region. Some states, including Bahrain and the United Arab Emirates (UAE), have even been designated as “Major Security Partners” of the United States. Given these relationships, and the joint American, Israeli, and Gulf interest in ensuring a stable global energy market the White House expected these states to naturally maintain strong relations with the United States.

In 2021, Anwar Gargash, a diplomatic adviser to the UAE’s president, commented on the power struggle in the region between Washington and Beijing, saying that “we are all worried very much by a looming cold war. That is bad news for all of us, because the idea of choosing is problematic in the international system, and I think it is not going to be an easy ride.” At the moment, contrary to the American perception, all cards are on the table, and Gulf states have yet to choose a definitive side in the conflict. For some, especially in the Gulf, the preference has been to seek out their own interests by approaching China and Russia, instead of solely prioritizing security issues in the region.

While the Gulf states are aware of the importance of the U.S. security umbrella for the region’s security, they have still opted to continue diversifying their partnerships. The Biden administration has kept U.S.-Arabian Peninsula interactions at a bare minimum, with only a handful of high-level visits as Biden enters the second half of his term.

A clear indicator of this dissatisfaction with the White House’s Gulf policy is the region’s minimal commitment to stabilizing the energy market, which was a central point on Biden’s agenda during his first and only visit to the region. The Joint Comprehensive Plan of Action (JCPOA) nuclear negotiations with Iran are another key concern for both Israel and Gulf states. With the West refusing to include Iran’s neighbors in the negotiations, the Gulf states decided to take charge and initiate direct negotiations, including several rounds of Saudi-Iranian talks in Baghdad. These talks led to a ceasefire in Yemen and the return of the Emirati and Kuwaiti ambassadors to Tehran.

The Gulf states have been more successful than Israel in diversifying their exposure to the three powers. Despite the normalization of relations through the Abraham Accords, Israel is not fully integrated with Gulf states and has a unique relationship with the United States. As a result, Israel perceives such dilemmas differently. Israeli policymakers believe that maintaining a good understanding with Russia—which heavily supports the Assad regime—is vital to safeguard Israel’s northern borders from proxy attacks by Iranian forces, especially following a significant drop in the U.S. military presence in Syria. Israel is often perceived as America’s closest ally, which makes it harder to keep its options open and interact freely with Russia and China. Israel’s recent condemnation of the Russian invasion and aid to Ukraine have jeopardized Israeli-Russian relations.

Despite these three powers’ support for different, often opposing, regional actors, policy collaboration can be achieved on matters such as navigation freedom for trade routes and the stability of the global energy market. This collaboration could potentially encourage deeper cooperation on more contentious issues that must be resolved to stabilize the region. Shared ambition, which doesn’t need to be a zero-sum game, is a common denominator for all states in the Middle East.

Ahmed Buhejji is the non-resident Grand Strategy Fellow at the Cambridge Middle East and North Africa Forum. He is a Second Secretary at the Ministry of Foreign Affairs of the Kingdom of Bahrain, joining the Office of the Foreign Minister in June 2018. Ahmed holds a Master’s in International Relations from Queen Mary University of London and a Master’s in Business Administration from DePaul University.