How The Revolutionary Guards Could Reshape Iran 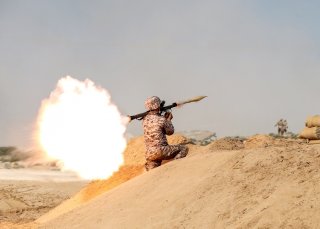 A little over decade ago, Ali Alfoneh, a scholar at the American Enterprise Institute, one of Washington’s most prominent think tanks, advanced a controversial theory about the balance of power within Iran. The idea, articulated first in a series of articles and later as a book, posited that Iran’s system of government had undergone a fundamental shift away from the clerical system established by the Ayatollah Ruhollah Khomeini in 1979 and toward military dictatorship. Effectively, Alfoneh argued, Iran had experienced what amounts to a creeping coup, as a result of which the country’s clerical army, known as the Islamic Revolutionary Guard Corps, or IRGC, was now in charge.

The concept was, for a time, enormously influential. It became the basis for the approach to Iran articulated by Hillary Clinton during her tenure as Secretary of State in the Obama administration, with the former First Lady repeatedly intoning that Iran’s Supreme Leader was being “supplanted” by military control. Many others likewise came to believe that – although still in positions of political power – Iran’s ayatollahs were effectively no longer calling the shots in Tehran.

The reality, however, has turned out to be a good deal more nuanced. True, the IRGC has unquestionably expanded its power within Iran’s clerical system in recent years, not least because of the dividends imparted by the 2015 nuclear deal spearheaded by the Obama administration. Yet, at least for the time being, the IRGC has demonstrated conclusively that it remains loyal to the country’s religious hierarchy and the man at its helm: Supreme Leader Ali Khamenei. But Alfoneh’s core point, that the IRGC constitutes a uniquely powerful and potentially transformative strategic actor, is undoubtedly correct. And today, as the Islamic Republic faces mounting internal and external pressure, his contention that the country’s clerical army might be prompted to take matters into its own hands is more germane than ever.

To understand exactly why, it’s necessary to grasp the unique role that the IRGC has played in Iranian politics over the past four decades. Founded at the start of the Islamic Revolution, the Guards were envisioned from the outset as the expeditionary arm of Khomeini’s version of radical political Islam. To this end, the preamble to the Islamic Republic’s original 1979 constitution tasks the IRGC not only with preserving order within the country, but also with exporting Iran’s revolution “throughout the world.” Over the years, that sweeping mandate has allowed the IRGC to take center stage in Iranian foreign policy and political affairs.

Militarily, the IRGC long ago eclipsed Iran’s standing army, the Artesh, to become the regime’s strategic tool of choice. It now serves as the custodian of the country’s burgeoning ballistic missile arsenal, as well as of its nascent (and still active) nuclear program. It is also in charge of the regime’s most valuable strategic asset: its extensive network of regional proxies.

Ever since its defeat in the grinding eight-year war with Saddam Hussein’s Iraq of the 1980s, the Islamic Republic has eschewed direct military confrontation in favor of indirect warfare. To this end, it worked diligently for decades to erect a broad network of proxy groups and affiliated militants throughout the Middle East and beyond. These groups, among them Lebanon’s Hezbollah, Yemen’s Houthi rebels, and assorted Iraqi Shi’a militias, have played an essential role in promoting Iran’s interests and advancing its strategic objectives by asymmetric means. And until his death earlier this year at the hands of the Trump administration, that network had been headed by Iran’s most influential military commander, IRGC Major General Qassem Soleimani.

Economically, meanwhile, the Guards have grown into a bona fide powerhouse, in control of numerous companies and corporate entities involved in everything from transportation to energy to construction. IRGC-controlled and -affiliated entities now permeate every sector of the formal Iranian economy, and wield extensive influence over the country’s gray- and black-market activities (including smuggling, illicit financial transfers and proliferation). All told, the IRGC has been estimated to command one-third or more of Iran’s total economy.

All of which has made the IRGC a truly indispensable force in Iranian politics, and a key symbol of the country’s international standing. As Nader Uskowi, a Senior Fellow at the Atlantic Council and an advisor to U.S. Central Command, puts it: “The Iranian regime requires the IRGC so it can negotiate with the world and with America from a position of strength.”

But does it want to? For decades, the United States has struggled with the question of what – if any – interaction with Iran’s clerical army might be possible. “It’s long been a dichotomy in American policy,” notes Jay Solomon of the Washington Institute, who has tracked IRGC activities for nearly two decades. “Even as we have chafed at the nature and power [of the IRGC], we have wanted to work with them” to solve various regional problems. For its part, Iran has adroitly used these competing impulses to its advantage, expand its activities throughout the region behind a veil of plausible deniability.

Until now. The Trump administration’s January 3rd killing of General Soleimani – which came in response to escalating provocations against U.S. forces and assets on the part of Iranian proxies – amounted to a grievous blow to Iran’s strategic capabilities. “The Islamic Republic has been profoundly affected by Soleimani’s death,” explains Uskowi. “Without Soleimani, Iran is hard-pressed to implement its regional proxy strategy efficiently.” That, at least, is likely to be the situation under the existing balance of power within the Islamic Republic.

But Tehran also faces serious problems at home. Since December of 2017, the country has weathered persistent anti-regime protests which have sorely tested the legitimacy of its ruling clerical regime. In the aftermath of Soleimani’s death and the Iranian government’s subsequent accidental downing of a Ukrainian airliner, these protests have flared anew in what many observers describe as a fundamental break between ordinary Iranians and a religious regime increasingly seen as corrupt, venal and dangerous to the safety of its people.

Faced with these challenges, Iran’s clerical army could decide that an internal transition is the best answer, and move to remove (or at least subordinate) the country’s current clerical elite. Such a step, after all, would allow the IRGC to preserve its current, extensive grip on national power while simultaneously working to alleviate economic pressure from the U.S. and reintegrate into the international community.

The idea is hardly far-fetched. Precisely this sort of internal power shift has taken place more than a few times in recent memory. It happened in Russia in the 1990s, when that country’s intelligence “deep state” exploited post-Soviet turmoil to consolidate its control and forge itself into a formidable economic and political enterprise that endures to this day. More recently, it transpired in Egypt, when its military moved to oust Mohammed Morsi’s Muslim Brotherhood-dominated government in 2013 and reestablish a political and economic status quo that had been upset by Morsi’s disruptive religious policies.

Would America welcome such a change, if it happened in Iran? It’s quite possible. President Trump, after all, has repeatedly said that the goal of his “maximum pressure” strategy is to bring Iran back to the international negotiating table and conclude a new, more comprehensive agreement to replace the 2015 nuclear deal. An IRGC takeover of the Iranian government could make such a development more likely by installing a strategic actor that is viewed by many in Washington as being more pragmatic and rational.

That, however, would represent something far short of real regime change, experts contend. “The IRGC represents the most ideological element of the regime,” notes Jonathan Schanzer of the influential Foundation for Defense of Democracies. “We shouldn’t welcome any approach that empowers it.”

Even so, that is precisely what might end up happening – even if inadvertently. That’s because, while the Trump administration’s campaign of “maximum pressure” has unquestionably had a profound impact on the Islamic Republic since its start in March 2018, not all strategic actors within the country have been affected equally. “Iran’s overall economy may be running on fumes,” Uskowi cautions, “but that doesn’t mean that the IRGC itself is.” Indeed, he notes, the Guards today are estimated to control some 500 companies, at least 200 of which have foreign subsidiaries. That, in turn, gives Iran’s clerical army a “safety valve” that the regime as a whole doesn’t have.

The IRGC is also poised to gain even greater political power. On the heels of the latest protests, Iran’s clerical elite has grown more reliant than ever on its praetorian guard, and has effectively given the country’s security forces “carte blanche” to purge their ranks and strengthen their hold on society. The IRGC could well emerge from this process far stronger and more capable than ever before.

If it does, Alfoneh may turn out to have been right after all. As it stands, the most likely “regime change” scenario for Iran might not be that of an opposition group overthrowing the mullahs and creating a fundamentally new system of government, but of the country’s most powerful strategic actor taking the political reins of the current one. America should, at least, be prepared for the possibility.