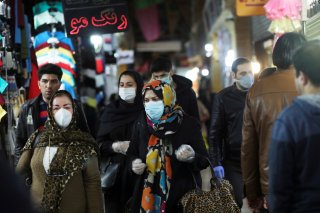 As Iran’s leadership debates how to respond to the health and economic crises ensuing from the coronavirus (COVID-19), the country has put forth a request for a $5 billion loan from the International Monetary Fund’s (IMF) Rapid Financial Investment fund. Since the United States is the largest shareholder, Washington has an effective veto over whether Iran’s request will be fulfilled. Even in these dire circumstances, Iran has refused humanitarian aid from the United States unless the Trump administration first lifts all sanctions on the country. With the humanitarian crises unfolding, the National Iranian American Council (NIAC) has called upon the Trump administration to temporarily alleviate sanctions for a few months and deliver humanitarian aid, similar to a Bush administration precedent in response to the 2003 earthquake in Bam, Iran.

Iran’s government is notably a bad actor. Lifting the sanctions, albeit temporarily, would give the green light to individuals and entities identified by the U.S. Treasury Department’s Office of Financial Assets Control (OFAC), which enforces the sanctions, as actors linked to militant groups, such as Hamas, Hezbollah, and ISIS. Not to mention, lifting sanctions would generally allow the Iranian government to receive an influx of financial resources and healthcare supplies, which may only go to groups favorable to the government instead of doing the most good for the greatest number of Iranian citizens.

This being said, the United States and the world are in crisis mode. The decisions that a government may make in a period of stability must be reassessed in moments of crisis. In the United States, the government does not have the capacity to reassess each sanction or renegotiate access to the SWIFT payments system over the next few weeks. This moment calls for an immediate measure.

In the case that the IMF approves the $5 billion loan, these funds go directly to the Iranian government with evaluations focused on the government’s economic policies instead of the end recipients of the funds. Furthermore, loans are disbursed over a period of approximately three years. For Iranians and Americans concerned that Ayatollah Ali Khamenei, Iran’s Islamic Revolutionary Guard Corps (IRGC), and IRGC-controlled companies like Khatam al-Anbiya will siphon resources for themselves if sanctions are temporarily lifted, the IMF loan has a greater chance of doing just that. However, alleviating sanctions will allow relief to permeate Iranian society in a much shorter time frame.

The Iranian government has continued to use the sanctions as an excuse not to commit to a closure of non-essential businesses, impose a curfew, or suspend interstate and intrastate travel. Meanwhile, Iran currently has more than 2,900 deaths with no sign of flattening the curve. Many middle and upper-class residents, who are financially able to sustain a period of unemployment, have been bunkered down in their homes for the past few weeks. However, for the working-class people who are paid hourly or daily, they would be unable to weather a period without income. They would rely on the government to provide basic relief. With a significant number of Iranians continuing their daily lives, this will only accelerate the spread of the virus.

Temporarily alleviating the sanctions would allow average Iranians, whether trapped at home or in a hospital, to access critical banking and telecommunications services. For universities looking to switch to video conferencing, the sanctions prohibit them from purchasing the license for Zoom or even updating their internet infrastructure to accommodate a surge in bandwidth or server capacity. For research labs and startups that want to focus on developing a treatment for COVID-19, the sanctions prohibit them from importing scientific equipment or purchasing licenses for data processing software. For Iranian factories that want to switch to manufacturing ventilators, the sanctions prohibit them from importing parts or materials from abroad. With the sanctions temporarily alleviated, foreign companies would not fear fines from the U.S. government, products could more quickly travel through source and transit country ports, and payments between parties could be facilitated.

Over the past few years, President Donald Trump’s rhetoric consistently emphasizes that other countries should focus on self-sufficiency. Regarding Iran specifically, President Trump has supported the Iranian people in recent protests. In November, as the government ordered its security forces to indiscriminately kill their own citizens which took to the streets against a sudden spike in gas prices, President Trump tweeted in support of the Iranian people while highlighting the unstable regime. Secretary of State Mike Pompeo even called upon Iranians to send photos and videos documenting the crackdown. In January, President Trump took to Twitter again in Persian to support the Iranian people taking action even under extreme actions by their government. The mishandling of the pandemic is yet another critical opportunity for the Trump administration to emphasize the abuses of the regime and support Iranian citizens. Iranians must mitigate one of the foremost crises facing their country this decade.

Under the current sanctions regime, there are exceptions allowing the delivery of medical supplies and humanitarian aid. Additionally, launched in late February 2020, the Swiss Humanitarian Trade Arrangement allows for the trade in goods such as medical supplies, agricultural commodities, and basic necessities without the risk of penalties from the United States. However, NGOs would have to comb through OFAC’s Iranian Financial Sanctions Regulations and Iranian Transactions and Sanctions Regulations in order to remain compliant. In the case that they misread the guidelines, they face serious penalties. Foreign governments, NGOs, or individuals may still be hesitant to contribute to the Iranian healthcare system due to the interwoven nature of the sanctions and high chance for missteps.

After a call with NIAC on March 26, Senator Christopher Murphy (D-CT), Senator Tim Kaine (D-VA), and other members of Congress wrote a letter to Secretary Pompeo and Secretary of the Treasury Steven Mnuchin supporting an easing of sanctions and outlining some key adjustments. On the one hand, these stipulations would create new financial channels for Iran to purchase humanitarian goods. This is sorely needed. On the other, the letter mentions that technology companies will remain barred from delivering services to the Iranian people. This prohibition is so broad that their sanctions plan risks having the same ineffectiveness as the current humanitarian aid exceptions. More must be done to address this problem.

Given recent events, it is clear that the Iranian government has doubled down on holding its people hostage. In this past week alone, Ayatollah Khamenei originally turned away Médecins Sans Frontières doctors and refused humanitarian aid offered by Secretary Pompeo. Iran’s leadership has communicated that they will continue to hinder foreign efforts to bolster healthcare in the country. Khamenei’s grounds for refusing U.S. aid? He alleged without offering any evidence that the virus is built for Iran using the genetic data of Iranians which the United States has obtained through different means. Meanwhile, the Ministry of Health and Medical Education in Iran announced on March 23 that official announcements of coronavirus cases will no longer include the province location. Iranians will not know whether their province is facing a spike in cases as opposed to other provinces across the country. Iran’s leadership is manipulating the information space to maintain a sense of chaos and disinformation in order to bolster support amongst a vulnerable population.

As this virus continues to plague the Iranian people, the stability of the state is at risk. A fundamental breakdown of the rule of law and the further spread of the pandemic would not be in the long-term interests of the United States. Also, strong U.S. partners and Iran’s border countries, Afghanistan, Azerbaijan, Iraq, Turkey, and Pakistan, would have their border security at risk as the chaos unfolds. Within the Middle East, a majority of U.S. partners in the region, namely Bahrain, Kuwait, Saudi Arabia, and Oman, have linked their cases to travel with Iran. Aside from serving the Iranian people, the United States has an obligation to defend our partners and allies in the region. For these reasons, it is within the U.S.’ interests to deliver services to the Iranian people in this unprecedented moment.

Aside from Trump’s rhetoric and U.S. interests, the United States is still expected to rise to the occasion of moral and humanitarian leadership on the global stage. A benevolent action by the United States such as this could demonstrate to the Iranian people that, while their government doesn’t have their best interests at heart, the United States does.

Marina Lorenzini is a first-year graduate student within the M.A. in Law & Diplomacy program at the Fletcher School. She is pursuing concentrations in International Negotiation & Conflict Resolution as well as Southwest Asia & Islamic Civilization.