Inside the Bloody Business of Turkey’s Syrian Mercenaries 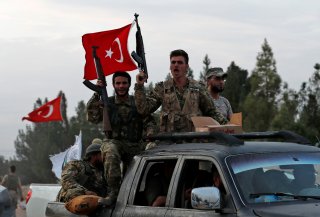 In April 2019, Gen. Khalifa Haftar, the ruler of east Libya and head of the Libyan National Army (LNA), launched a surprise offensive on the Government of National Accord (GNA) in Tripoli. Haftar’s forces presented a significant threat and, in response, the GNA requested Turkish military support. But instead of sending Turkish troops to Libya, Turkish intelligence officials began recruiting from the ranks of Syrian opposition fighters.

Ahmed previously fought in Syria with the rebel al-Hamzat militia, and in early 2020 he was on a flight to Libya’s besieged capital. Ahmed’s al-Hamzat was one of eight Turkish-backed armed groups contracted to send mercenaries to Libya. In Syria, he recalled, fighters were rarely forced into battle. In the Syrian context, if conditions in a skirmish became unfavorable, many would simply fall back and fight later. Upon his arrival in Libya, however, Ahmed discovered this was no longer the case. Seeing the frontline in south Tripoli, he asked to go home. But his commanding officer responded: “Coming to Libya was your choice, going back is not.”

Together with his fellow recruits, Ahmed reluctantly moved into an empty villa close to the frontline. The first disbursement of his salary would be in three months, upon return to Syria. Desperation set in. It didn't take long, however, for Ahmed to understand how things worked. “A shopkeeper introduced us to the black market,” he said, “where we could sell our bullets and weapons to pay for groceries.” Two months later, Ahmed went home with a shattered pelvis and received a quarter of the $10,000 owed. “When I complained, they said this is what we have for you. If you don’t like it, file a complaint,” Ahmed reported.

Ahmed’s experience wasn’t unique. Rather, callous profit-seeking has defined Turkey’s mercenary program. Corruption is endemic to the process, and the high levels of graft—touching recruitment, basing, and the return—empower armed actors in Syria’s northwest, evidence of how foreign interventions can sustain war economies.

Seif Abu Bakr is the leader of al-Hamzat, which formed in 2013 as a division of the Free Syrian Army. Abu Bakr is well-known for his tenacity and ruthlessness, and his al-Hamzat has received training and equipment directly from the United States and the United Kingdom. This support was given first to counter Bashar al-Assad’s regime, then to fight the Islamic State of Iraq and Syria (ISIS). In 2016, Turkey used al-Hamzat in its military operations against Kurdish-led Syrian Democratic Forces. Years of close work with Ankara paid off when Turkish intelligence (MIT) selected Abu Bakr’s militia to recruit mercenaries for Libya. Now, with Syria rapidly becoming a frozen conflict, Turkey’s mercenary program has helped Abu Bakr and other commanders maintain the revenue streams and power they have grown accustomed to from the bloody civil war.

In November 2019, the GNA and Turkey signed a generous memorandum of understanding on maritime boundaries, which prompted immediate protests from Cyprus, Greece, and Egypt. Within months, Ankara ramped up its support for the GNA; the Turkish military effectively took control of operations, shipping in air defense systems, drones, and thousands of Syrian mercenaries.

Back in Syria, Turkish officers put no restrictions on the number of recruits for the Libyan front—an influx of Syrians would provide more time to train Libyan fighters and free up GNA personnel for offensive operations—and Syrian commanders quickly took advantage. The more men commanders sent to Libya, the more they could skim off the top.

Abo Saied, a recruiter for one of the Turkish-backed militias, said he was not surprised to hear Ahmed’s woes about his salary. “Commanders to this day confiscate salaries,” he confirmed. But when the fighting in Libya was at its peak, Saied had his own problems. “We had to send as many fighters as we could recruit. The Turks were asking for 2,000 men; our battalion is only 500 strong. So, we started sending kids with zero military experience.”

Recruitment spreadsheets provided by Saied showed that at least three fighters sent to Libya were under eighteen years old. Shipping anyone available became the norm. Militias swept prisons and gave detained Kurdish men the option to fight or stay locked up. “Many Kurds,” Saied noted, “reluctantly took the offer.”

In March 2020, GNA forces, with Turkish backing, began pushing Haftar’s LNA out of Tripoli’s southern suburbs. Eight months later, the United Nations brokered a ceasefire. By then, another front began heating up for a key Turkish ally. On September 27, 2020, Azerbaijan launched air and ground attacks across Nagorno-Karabakh, reigniting conflict between Azerbaijani, Armenian, and local Karabakh forces.

Saied was again recruiting for the war in the Caucasus, but he had to change tactics. As in Libya, Turkish intelligence outsourced recruitment to Syrian commanders. But those freewheeling days with no restrictions and little oversight were over. Now, according to Saied, the Turks “paid more attention, and they insisted we send experienced fighters.” The vetting process improved. As recruiters understood it, the Turks viewed the Azeris as “brothers,” and their support for Azerbaijan was ideological, unlike their support for the GNA in Libya, which was “contractual and based on geopolitical interests.”

Recruiters we spoke to maintain that their primary contact was with Turkish intelligence, while logistics were outsourced to “unknown companies.” It is likely that those companies are affiliated with SADAT, the Turkish private military company (PMC) founded by Adnan Tanrıverdi, a former brigadier general and close confidant of Turkish president Recep Tayyip Erdoğan. In a 2020 report, the U.S. Department of Defense stated that SADAT “maintains supervision and payment of the estimated 5,000 pro-GNA Syrian fighters in Libya.” Yet compared to Turkish military and intelligence, SADAT’s importance in mercenary recruitment is difficult to ascertain. Still, the company likely coordinates, at least to some degree, with Turkish intelligence services.

Corruption was endemic to Turkey’s mercenary program in Azerbaijan as well. Hasan, a twenty-five-year-old from Aleppo, fought in Nagorno-Karabakh for fifty-five days. “I was told that my salary was going to be $2,500 per month and that I would be a border guard,” he told us. Paradoxically, despite Turkish intelligence’s demands for experience, the Syrians sent to Azerbaijan were simply cannon fodder. Hasan, who was only given an AK-47, understood right away he was under-equipped. “High precision targeting was a very scary thing for me. I never felt scared the same way in Syria.” After being shot by a sniper, Hasan returned home, where he received just $1,500. Again, only a fraction of what he was owed.

Syrians also found themselves under-equipped in Libya, but for different reasons. “We were given old machine guns from home,” one fighter recalled, “not due to lack of higher quality weapons, but because those weapons had been sold off on the black market.” As in Azerbaijan, the Syrians sent to Libya found themselves in a very different war. Haftar’s LNA—backed by the UAE, Egypt, and Russia—employed sophisticated surveillance drones to map out targets. Back in Syria, “neither the regime nor rebels had the ability to target precisely.”

The mercenaries Saied recruits are overwhelmingly young men with no income and few prospects for employment. Those interviewed saw the trips to Libya or Azerbaijan as a chance to save cash over a few months, build a little capital, and start a small business back home. Many Syrians who signed up to fight in Libya and Azerbaijan were promised, in the event of their death, that their family members would receive a path to Turkish citizenship.

It was not long before Syrian commanders profited off those citizenship schemes as well. According to fighters, commanders began offering Turkish citizenship to the highest bidder. Instead of providing a deceased fighter’s family with citizenship, anyone who could afford the bribe acquired forged documents. As the scam grew, Turkish intelligence had to shut down the program entirely.

Given the cynicism and naked profit-seeking that pervaded the program, few mercenaries were interested in why they were fighting. To motivate them, Turkish officials tried to paint the Syrian civil war as a global conflict, or appeal to religion or ethnicity.

Just hours after arriving in Azerbaijan, officials showed Hasan and others a video, purportedly of an Armenian soldier cutting open the belly of a pregnant Muslim Azeri woman. The Syrian fighters were upset. “They shouted they would be happy to fight for justice.” Others were told, falsely, that Yerevan had recruited Kurds from Syria to fight in Nagorno-Karabakh. Still, according to another Syrian fighter, most couldn’t care less.

In Libya, Turkish officers told recruits that they were fighting Assad’s regime. Russian PMCs, including those collectively referred to as “Wagner Group,” had in fact recruited Syrians from Damascus-controlled territory to fight for the LNA. Unlike their Turkish counterparts, however, Syrians fighting for the LNA reported non-stop training and payment in full.

While Syrian fighters have now left Azerbaijan, they continue to be based in Libya, where they are often bored and subjected to exploitation. Mohammed has been on a base in Libya for a year. “Hashish,” according to him, “is more popular than crystal meth because it's cheaper. “We have too much free time,” he says. Mercenaries rarely leave their bases. At first, during the fighting, this was because they feared kidnapping. Now, they know their isolation is a product of Libyans’ hatred. Mohammed says that the Libyans see them as vandals. Nor are Syrian mercenaries popular among Libya’s militias. For instance, in early August, two Syrian mercenaries stationed around Tripoli’s Mitiga Airport were killed in an anonymous attack.