Iran’s Most Effective Deterrent Lies in Its People 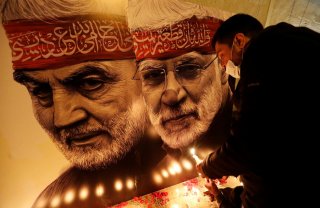 A year ago, the world seemed teetered on the razor’s edge of a forewarned war that could have made the Iraq and Afghanistan debacles look like enviable cakewalks.

In a clear breach of international law, Iraqi sovereignty, and red lines that had hitherto governed even the most fractious periods in U.S.-Iran relations, President Donald J. Trump ordered, and subsequently vaunted, the assassination of arguably the most able, influential, charismatic, and revered figure in recent Iranian history: General Qassem Soleimani. A figure central to the inner sanctum of the country’s military establishment, the general had for years acted as the vital glue that held a motley assortment of regional alliances together, integrating them into a functioning but loosely-knit whole aligned with Iran’s national command and control structure. What further compounded this severe blow to Iran’s defense posture was the fact that the barefaced murder of the standard-bearer of Iranian influence in the region had been slain in Iraq, the country where that influence reached its apogee.

Since then, a number of U.S. officials and indefatigable champions of interventionism have boasted that the assassination has successfully contained Iran. Having cast the United States as an unpredictable actor, they claim, the assassination further subdued Iran by placing more limits on its already complicated security calculus. This claim may seem meritorious, especially given the fragile calm that has prevailed ever since the assassination: with only a few possible exceptions, one struggles to identify any transformational escalation of military operations by Iran over the past year. Even the recent assassination of its top nuclear scientist, widely believed to have been Israel’s work, has yet to trigger a perceptible retaliation.

But the story does not end there. The assassination of General Soleimani may have contributed to subduing Iran for the nonce. But it also set-in motion unanticipated developments that may come to haunt U.S. military planners in the future.

Iran’s immediate retaliation for this irreparable loss seemed remarkably underwhelming: a missile strike on American bases in Iraq that merely destroyed buildings and caused traumatic brain injuries to more than a hundred U.S. service personnel. The non-lethal character of the attack was initially attributed to a conscious Iranian decision to retaliate without further escalating the stand-off. But as details of the attack and the carnage inflicted on the base began to emerge, it became clear that the zero-casualty figure was owed to little more than a colossal stroke of luck. The Iranian leadership had ordered the strikes without any serious intent to avoid U.S. casualties, fully cognizant that the liquidation of American troops would have made it impossible for Trump not to significantly escalate the dust-up, potentially plunging the two countries into a full-scale war. In other words, Iran’s decision-makers seemed largely undeterred by fears of a possible war with the United States. This uncomfortable conclusion will likely haunt future Pentagon planners.

But the missiles were the mere husks of Iran’s retaliation. A more decisive response would come from ordinary Iranians, who would act before the country’s political leadership could even fathom a response. Rarely has the Iranian appetite for congregation been expressed as robustly and perceptibly as the largely spontaneous expressions of grief and rage that ensued across the country following the assassination. Impassioned expressions of admiration for the commander emanated from almost the full gamut of the country’s political spectrum, including prominent activists who had for years openly criticized the Revolutionary Guards for its involvement in politics and the economy.

It is easy to forget that just a decade ago, General Soleimani’s name barely figured in national life. But the emergence of ISIS as a threat to Iran’s national security triggered in the public a level of alarm not felt since Saddam’s 1980 invasion of Iran. A litany of serious concerns about corruption, democratic deficit, human rights, and mismanagement of the economy were quickly relegated to the backburner of national priorities. Nothing seemed as deserving of the nation’s full and undivided attention as preserving its territorial integrity against the marauders of ISIS. Subsequently, General Soleimani, the man spearheading the fight against the caliphate, would be elevated to a saintly status. The reclusive general, who lacked the faintest interest in either fame or fortune, had stormed into the national consciousness as Iran’s watchful sentinel. This, more than anything else, afforded him the reverence that was on full display during the largely spontaneous funeral ceremonies held in his honor.

By assassinating General Soleimani and triggering a nationalist reaction of possibly historic proportions, Trump unwittingly laid bare the fragile foundations of an article of faith in U.S. policy circles. For decades, successive U.S. administrations had parroted the rhetoric that in dealing with Iran, “all options are on the table.” The motto, meant to signify America’s capacity to decisively win any military conflagration with Iran, had been a regular feature of the country’s diplomatic toolbox. It betrayed, on the one hand, a deep-seated belief in the U.S. military’s overwhelming superiority over Iran. But it also reflected a naive hope that in the event of a full-blown war, a censorious Iranian populace, supposedly hell-bent on nothing more than ousting the country’s rulers, would either welcome a foreign military intervention or stand idly by as their borders were plowed over by their “liberators”.

Like any fantasy, this one, too, bears a connection, if tenuous, with reality. Here, the reality of seething social discontent with Iran’s ruling elite. Indeed, the stupendous expressions of grief triggered by the assassination were chronologically sandwiched between two separate rounds of anti-state protests in November 2019 and January 2020. An outside observer may feel flummoxed by what may come across as the public’s pendulum-like mood swings between seemingly contradictory extremes. But this apparent contradiction collapses when one ceases to reduce every tumultuous episode in the country to a primordial and unresolvable opposition between the “regime” and the “Iranian people.” The real and present grievances of the Iranian people notwithstanding, it is highly improbable that any measure of discontent with the ruling establishment can ever prove so transformational as to substantially loosen the long-standing national consensus on the sanctity of the country’s territorial integrity.

In the corridors of U.S. power and decision-making, images of the gargantuan commemorations for the fallen general must have sent tremors of concern and doubt rippling through, extinguishing any boisterous glee that may initially have been triggered by the assassination. Henceforth, that overused threat so central to the lexicon of U.S. foreign policymakers (“all options are on the table”) should ring even hollower than before. For one cannot envisage total war with Iran without conjuring up the frightening specter of millions of Iranians united in the common belief that no concern can ever be as sacrosanct as their national borders and symbols. Next to the sheer vastness of this popular backlash, the full panoply of Iran’s military forces should seem like ornamental outworks.

This uncomfortable operating assumption is likely to foist its towering presence on the hearts and minds of U.S. military planners and policymakers when dealing with Iran. By murdering General Soleimani and releasing the floodgates of national grief and anger, Trump has made an already rugged terrain of uncomfortable decisions even more cumbersome to navigate.