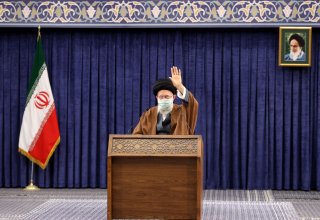 Iranian supreme leader Ali Khamenei made his first public appearance in several weeks over the weekend, appearing to push back against reports that he was seriously ill and had nearly died before an emergency operation.

Khamenei appeared in public on Saturday to participate in an event for Arbaeen, a Shia Muslim religious observance officially commemorated in Iran. Since he assumed the country’s leadership in 1989, Khamenei has regularly participated in Arbaeen events, but Saturday’s commemorations marked the first in three years after events were canceled in 2020 and 2021 amid the COVID-19 pandemic. Although the commemoration was held as scheduled over the weekend, social distancing precautions were still observed, and the supreme leader was shown wearing a mask in photographs released on his personal website.

Khamenei’s participation in the ceremony took place only one day after a New York Times report claimed that the eighty-three-year-old cleric was “gravely ill.” Citing four anonymous sources close to the supreme leader, the report claimed that he had undergone life-saving bowel surgery but remained bedridden and under round-the-clock medical observation. Unusually, the Iranian government did not publicly deny the health-related allegations, but state-run media contested a report that Khamenei had canceled a meeting with the Assembly of Experts, a clerical body tasked with choosing and advising the supreme leader. Local media also claimed that Khamenei had participated in a forum with Iranian athletes, although the government did not release any photographs from the meeting.

Khamenei’s health has long been the subject of speculation among Western observers, and the supreme leader’s death has been erroneously reported several times. The supreme leader was diagnosed with prostate cancer in 2014 but underwent a successful operation and was thought to be in acceptable health prior to the New York Times report. In addition to age-related ailments, Khamenei is known to suffer from lingering injuries related to an assassination attempt in 1981, which cost him the use of his right hand.

It is unclear who will succeed Khamanei as Iran’s supreme leader in the event of his death. The transfer of power from one supreme leader to the next has only occurred once in Iran’s post-1979 era, following the death of the country’s modern founder, Ayatollah Ruhollah Khomeini, in 1989. After Khomeini’s death, the Assembly of Experts chose Khamenei, then serving as the country’s president, to succeed him—skirting a nominal requirement that the supreme leader be an “ayatollah,” or a high-ranking Shi’a cleric. It is possible, though far from certain, that a similar transition might occur from Khamenei to current president Ebrahim Raisi, whose possession of the religious title is also ambiguous.