Iran and the European Union Agree to Resume Nuclear Talks 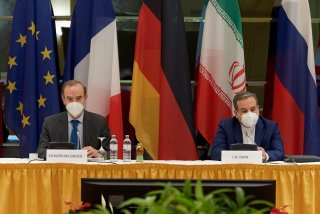 Iranian foreign minister Hossein Amirabdollahian and European Union (EU) representative for foreign affairs Josep Borrell announced during a joint press conference in Tehran over the weekend that Iran would renew negotiations over its nuclear program with the United States, which have stalled since March following an impasse over political disputes between Washington and Tehran.

The two diplomats indicated that they had held a “long but positive” discussion on Saturday, after which Amirabdollahian agreed to the resumption of indirect discussions between Iran and the United States, emphasizing that Iran’s primary concern was returning to the sanctions relief promised under the original deal.

“Whatever issue that can impact Iran’s economic benefits will not be agreeable,” Abdollahian said. “We hope … that the American side will this time realistically and fairly engage in committed and responsible acts towards reaching the final point of an agreement.”

Borrell emphasized that the resumed discussions were intended to “resolv[e] the last outstanding issues,” without describing what those issues were.

Iran and the P5+1 nations fully cooperated in the Joint Comprehensive Plan of Action (JCPOA) from its inception in 2015 until 2018, when President Donald Trump unilaterally withdrew from the deal and imposed “maximum pressure” sanctions on Iran in an attempt to win better concessions. Although Iran initially continued to adhere to its obligations under the deal, it gradually withdrew from them as tensions rose between Iran and the West. Iran withdrew from the deal altogether after the assassination of Islamic Revolutionary Guard Corps (IRGC) Quds Force commander Qassem Soleimani in January 2020.

President Joe Biden and Iranian president Ebrahim Raisi have voiced willingness to return to the nuclear agreement and negotiations to this end have continued in Vienna, Austria, but political issues have obstructed the finalization process as Iran’s nuclear program draws closer to completion.

In particular, the two sides have clashed over the U.S. designation of the IRGC, the branch of Iran’s military devoted to preserving the Iranian government’s theocratic character, as a foreign terrorist organization, obstructing its ability to engage in international commerce. Because the designation was part of Trump’s “maximum pressure” campaign, Iranian negotiators have pressed Biden to undo it. However, Biden has refused, partly due to powerful political opposition to the move on Capitol Hill.