Iran Cracks Down on Baha’i Community for Alleged Israel Ties 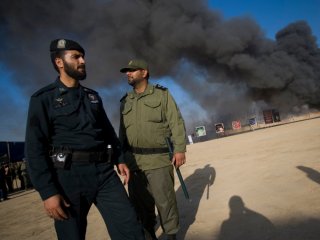 Iran’s Baha’i community, by most accounts the country’s largest religious minority, has suffered from increasing persecution in recent months after a series of internal security failures led Iranian officials and commentators to accuse the group of sympathy for Israel.

The Baha’i World News Service reported on Wednesday that Iranian security forces had raided the village of Roushankouh in Iran’s northern Mazandaran province the previous day, confiscating around fifty acres of land from the local community and demolishing six houses. The report noted that the actions in Roushankouh marked only the latest incident in a weeks-long period of “intensifying persecution of the Baháʼís,” observing that more than one hundred members of the faith community had been arrested in Iran since June—many on unclear or unspecified charges.

“Given the Iranian government policy documents persecuting Baha’is, the international community must act immediately before it is too late,” Diane Ala’i, the representative of the “Baha’i International Community” to the United Nations in Geneva, said, according to the report.

The Baha’i faith, which claims to be the most recent in a series of revealed religions, including Islam, is considered blasphemous by many Muslims, who regard the Qur’an as God’s final message to humanity. Although the Baha’i faith was founded and long centered in Iran, it has experienced varying degrees of persecution under each successive Iranian government, beginning with the Qajar Dynasty during the nineteenth century and lasting until the Islamic Republic in the present. In its earliest post-1979 days, the theocratic government of Iran acted with particular brutality toward the Baha’i community, killing and imprisoning thousands. Although open warfare against the Baha’i has largely ceased, Tehran has since instituted a system of repression and de facto segregation excluding the religion’s adherents from many aspects of public life.

In addition to its other accusations against the Baha’i community, the Iranian government has long accused Baha’is of sympathy for Israel, where the religion’s formal headquarters is located. Outside observers have noted that crackdowns against Baha’i villages sometimes follow successful Israeli operations within Iran, most recently including a spate of assassinations of senior military personnel. Some scholars have also connected anti-Baha’i pogroms with economic downturns, suggesting that the Iranian government periodically targets the faith as a scapegoat for economic problems within the country.

Today, there are an estimated five to eight million Baha’is in the world, the largest group of whom live in India. Despite challenges from Tehran, roughly 300,000 of the religion's adherents continue to live in Iran.