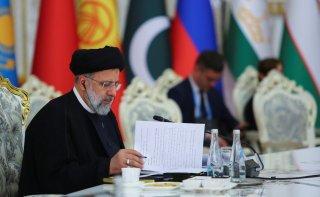 After Iran joined the Shanghai Cooperation Organization (SCO), a bloc of Eurasian states committed to improving political, economic, and security ties, newly elected President Ebrahim Raisi declared that Iran’s accession represented a rejection of the “unilateralism” of the United States.

Iranian state media announced Tehran’s entry into the pact on Friday, saying that it had been approved during the SCO’s annual conference in Dushanbe, Tajikistan. Iran is the ninth member state within the SCO; the other eight states are China, Russia, India, Pakistan, Kazakhstan, Kyrgyzstan, Uzbekistan, and Tajikistan. Prior to its accession as a member, Iran had held observer status within the group for fifteen years.

In his speech at the summit, Raisi announced that Iran’s goal in entering the pact was to expand its political ties with countries in Central and East Asia and to insulate itself from Western economic punishments. The president also emphasized that Iran brought major geopolitical advantages to the group, including its large population, abundant mineral wealth, and strategic position in the Middle East. The last of these factors is judged to be of particular interest to China, which seeks to expand its Belt and Road Initiative (BRI) economic development program westward.

“The world has entered a new era,” Raisi said, repeating that “hegemony and unilateralism are failing.” Instead, Raisi argued that the world had become multipolar, requiring smaller powers to cooperate and limiting the ability of traditional superpowers–particularly the United States–to singlehandedly impose demands.

Raisi referred to U.S. sanctions on Iran as a form of “economic terrorism” and a barrier to regional progress. He called on the SCO to develop methods to fight sanctions, such as united refusal to comply.

Iran has endured harsh U.S. sanctions since 2018 when then-President Donald Trump withdrew the United States from the Joint Comprehensive Plan of Action (JCPOA) nuclear deal with Iran. While President Joe Biden has prioritized a return to the deal, pushing for continued negotiations in Vienna, Iran has indicated that the negotiations are less urgent than before. At the summit, Raisi committed Iran to further diplomacy, but also made a point to insist that Iran’s right to develop a “peaceful” nuclear program was inviolable.

Raisi was scheduled to meet Russian President Vladimir Putin at the summit, but the meeting was postponed after several of Putin’s staffers tested positive for the coronavirus.