Iran Prepares for Political Upheaval Amid a Coronavirus Scare 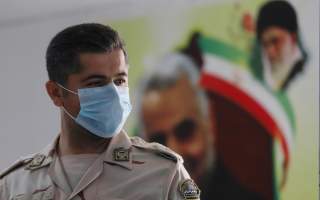 As the coronavirus outbreak spreads throughout Iran, the headlines feature a steady drip, drip, drip of new infections, deaths, and extraordinary precautions. There are regular announcements of leading regime officials testing positive—former cabinet ministers, members of parliament and the Rouhani administration, and even members of Iran’s deep state of unelected decisionmakers are being afflicted with the disease. But amid the latest public health crisis, there are two dynamics to watch: the tenure of Iran’s health minister and the office of the supreme leader’s oversight of the matter.

Iran’s health minister, Saeed Namaki, has only been in office for little over a year but he’s already facing his biggest crisis to date. Namaki’s ministry has played a prominent role in the management of the coronavirus outbreak. Since 1981, Iran’s premiers have averaged two to three health ministers during their two-term tenures, with Alireza Marandi still ranking as the longest-serving health minister in the Islamic Republic. Namaki is only the second in Hassan Rouhani’s presidency.

Through the years, the position hasn’t been without controversy, with budget problems a complaint across administrations. In 2012, then-President Mahmoud Ahmadinejad fired his health minister, and the first female cabinet minister in the history of the Islamic Republic, Marzieh Vahid-Dastjerdi after comments in which she alleged, “I have heard luxury cars have been imported with subsidized dollars, but I don’t know what happened to the dollars that were supposed to be allocated for importing medicine.” Fast forward to 2019, Rouhani’s first health minister, Hasan Gazizadeh Hashemi, similarly complained over budget shortages and resigned, in part, over them. In a speech, he once said “I’m a hard worker and I have a high tolerance . . . these aren’t new issues, and I have not made these issues public until now. I’ve written numerous letters to the president; many things have happened and I have not told anybody.” There have also been impeachment attempts against health ministers—specifically in 2003 against Masoud Pezeshkian.

Namaki is inheriting this legacy. But he’s uniquely vulnerable. Namaki is the first non-physician to serve at the top of the health ministry since 1979—he holds a doctorate in pharmacology. Additionally, he lacks the stature of his predecessors. Namaki, in addition to being a professor, previously served as a deputy in the Planning and Budget Organization, Health Ministry, and Environment Department. In essence, he’s been more of an administrative technocrat in contrast to previous ministers, who all either served as leading academic physicians, politicians with an existing base of support, or established ministerial-level leaders within the Islamic Republic’s halls of power.

For example, before ascending to the health ministry, Hasan Gazizadeh Hashemi was the chancellor of Tehran University of Medical Sciences. Masoud Pezeshkian served as chancellor of Tabriz University of Medical Sciences. Other academic physicians who went on to serve as health minister include Kamran Bagheri Lankarani, Mohammad-Hassan Tariqat Monfared, and Reza Malekzadeh, who were all professors. Those with preexisting political standing within the Nezam prior to their helm at the health ministry include figures like Marzieh Vahid-Dastjerdi, who was a member of parliament, Mohammad Farhadi, who was minister of science, and Iradj Fazel, who was minister of higher education.

Thus, Namaki is breaking new ground while traversing shaky ground as the Islamic Republic confronts its biggest public health crisis. With the conservative ascendancy in Iran’s new parliament, which wields the power of impeachment, his stewardship of the crisis will inevitably fall under the microscope. In late February, a parliamentarian from Qom accused the government of underreporting the extent of the coronavirus infections in his city and “not taking the coronavirus [outbreak] in Qom seriously.” Former health minister Masoud Pezeshkian, now deputy speaker of Iran’s parliament, questioned why Qom had not been quarantined when the disease first broke out. “If I were the Minister of Health, I would have quarantined Qom on the first day and would not have allowed people to leave their houses,” he said. The discord has become so intense that Ali Larijani, the speaker of Iran’s parliament, wrote a letter to Iran’s supreme leader in recent days requesting that Rouhani take over the chairmanship of a national task force for combating the coronavirus, which the health ministry previously helmed, after complaints from legislators over Namaki’s limitations in managing the crisis. Iranian media reports indicate that Ayatollah Khamenei has “demanded” Rouhani do so. When the new parliament is seated in May, expect increased scrutiny of the health ministry.

Amid the circular firing squad within Iran’s elected government, the supreme leader has positioned himself as above the fray. This has manifested itself in Khamenei employing his old guard network as the disease envelops the country.

In the early days of the crisis, the supreme leader invited his longtime personal physician and former health minister, Alireza Marandi, to brief him on the coronavirus and sit for a televised interview. In addition to his medical responsibilities, Marandi also serves as president of Iran’s Academy of Medical Sciences and is an elder statesman when it comes to health policy in the supreme leader’s office. Marandi’s clout in the healthcare space is comparable to that of Ali Akbar Velayati, Iran’s longest-serving foreign minister, who now serves as Khamenei’s foreign policy advisor.

This visit was an important sign of the parallel state infrastructure that surrounds Khamenei. The visual was also notable—not only did Marandi flank Khamenei when he recorded his message to Iranians, but he also gave a separate interview that was recorded following the supreme leader’s statement. While Khamenei thanked the health minister, he was nowhere to be found in the supreme leader’s bookshelf-lined inner sanctum.

Marandi credited Khamenei for deploying the Basij to combat polio years ago, which is now being used in the fight against the coronavirus. Additionally, he revealed that Khamenei has ordered the institutions which he controls—the Headquarters for Executing the Order of the Imam and the Mostazafan Foundation—to amplify the government’s efforts to combat the coronavirus. As the Rouhani administration struggles to contain the outbreak with a new non-physician health minister, the supreme leader’s personal network will continue to watch the already embattled Rouhani government very closely—and even intervene in the case of the Larijani letter—in what is already proving to be a defining moment in the Islamic Republic. In a sign of a potential power struggle, the Islamic Revolutionary Guard Corps (IRGC)—which reports directly to the supreme leader—has established its own permanent base—”Shafa”—for combatting the coronavirus. While Tehran is emphasizing cooperation, the IRGC’s more visible presence in the crisis is evidence of Khamenei-controlled entities competing with and potentially supplanting the Rouhani administration-driven efforts. There have even been rumors of the health minister’s intent to resign over the infighting.

In recent days, a new banner has been raised in Valiasr Square in Tehran—depicting and thanking healthcare workers. At this critical moment, the Rouhani administration faces twin pressures from Iran’s elected and unelected power centers. With the economy already reeling from sanctions, more political upheaval is possible in the months to come.

Jason M. Brodsky is the policy director at United Against Nuclear Iran (UANI).