Iran Running Out of Reasons Not to Rejoin JCPOA Negotiations, Malley Warns 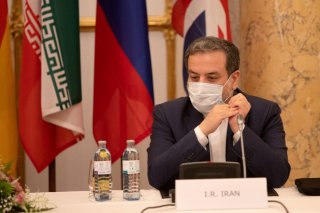 U.S. Special Representative for Iran Robert Malley told reporters on Monday that the United States was impatient for Iran to open negotiations, but had “other options” if it failed to do so.

Following the accession of President Joe Biden to the presidency in January 2021, the United States resolved to re-enter the Joint Comprehensive Plan of Action (JCPOA), the 2015 nuclear deal that traded sanctions relief for Iran in exchange for limits on its ability to enrich uranium.

However, while the Iranian government has publicly committed to remaining in the deal, it has requested conciliatory measures from the United States, including the unconditional lifting of some sanctions, before it has agreed to make any concessions of its own. American diplomats have refused, and six rounds of negotiations between the two sides in Vienna have so far kept both sides at an impasse.

Although the United States has refrained from imposing a time deadline on the agreement, Malley has warned that the time is running out. He also expressed frustration to reporters that the Iranian government was running out of “official reasons” to continue delaying the negotiations.

“We’re in a critical phase of the efforts to see whether we can revive the JCPOA,” he said, although he noted that the window for diplomacy “is never going to be closed,” even in the event of Iran’s abject refusal to rejoin the agreement.

While the Biden administration has pushed for continued negotiations with an end goal of rejoining the nuclear agreement, consensus on the JCPOA’s usefulness has been far from unanimous on Capitol Hill. Many Republicans continue to openly criticize the pact and the efforts to rejoin it, noting that the time limits it imposes would expire within ten to fifteen years, after which Iran would be free to pursue unlimited nuclear enrichment.

The Republican administration of President Donald Trump initially withdrew from the pact in 2018 in favor of “maximum pressure” through sanctions, leading to Iranian non-compliance.

Meanwhile, Israel, which has opposed the JCPOA from the outset and engaged in a high-profile campaign of sabotage and assassination before and after its negotiation, has warned that it could pursue its own actions against Tehran’s nuclear program, regardless of the pact’s final outcome. Israeli foreign minister Yair Lapid told a Washington news conference in October that the Jewish state had a “responsibility” to act against Iran’s nuclear ambitions however it could.