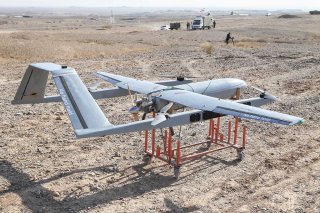 The Liberian-flagged tanker Mercer Street was transiting through the Gulf of Oman on July 29, bound for the United Arab Emirates, when it was attacked by two delta-winged drones packed full of explosives. The startled crew issued several distress calls.

But before help could arrive, a third drone slammed into the pilothouse early in the morning of July 30. The explosion ripping a six-foot-hole in the vessel and killing the ship’s Romanian captain and his British bodyguard.

The attack on the oil tanker, which was managed by the London-based Zodiac Maritime, followed a half-year of tit-for-tat acts of maritime sabotage between Iran and Israel, though this was the first incident to result in fatalities. Unsurprisingly, a subsequent investigation by U.S. Central Command found that parts of the drones recovered from the attack matched those photographed on Iranian delta-wing drones.

The incidents reflect how Iran has developed a diverse arsenal of kamikaze and reusable combat drones to project military pressure across the Middle East at an acceptable degree of political and military risk. That’s because unlike Iran’s aging fleet of manned combat aircraft, drones are affordable, expendable and deniable—and therefore especially useful in gray-zone contexts under the threshold of overt war.

In fact, Iran has been using surveillance and combat drones for roughly thirty-five years, starting with Ababil and Mohajer combat and surveillance drones deployed in the mid-1980s during the Iran-Iraq War. A drone unit was even the subject of a 1990s-era war movie Mohajer. Modernized iterations of the Ababil and Mohajer followed in the 1990s and 2000s. In the early 2010s, Iranian companies began introducing a diverse spectrum of new designs.

All or most of Iran’s modern drones—even those with the range to fly many hundreds of miles—still lack satellite communication links allowing for remote control over distances greater than one hundred to two hundred miles.  However, many areas of interest for Iran either lie within or just across its borders and coastline—or in places where there are allies happy to receive or host Iranian weapons. These allies consist of Hezbollah in Lebanon, Houthis rebels in Yemen, Shia militias in Iraq and the Syrian government under Bashar al-Assad. It’s notable that crashed Iranian drones or their components have been recovered in Afghanistan, Bahrain, Iraq, Israel, Saudi Arabia, Sudan, the United Arab Emirates, and Yemen.

Iran’s drones most prominently serve with the air, sea and ground branches of the “expeditionary” Iranian Revolutionary Guard Corps but are being introduced into the regular Iranian military too. It’s important to note that most military drones are employed for surveillance and reconnaissance missions—which could include locating targets for, and observing the results of ballistic missile attacks—or as practice targets for air defense units. Even combat drones usually engage in far more reconnaissance than strike missions.

Keeping track of Iranian drone projects is complicated by Tehran’s tendency to circulate fabricated, exaggerated or inconsistent propaganda about its weapons.  Numerous Iranian companies are developing and manufacturing drones, though these draw to a degree on off-the-shelf drone components, especially engines, acquired from China or Europe via international middlemen and shell companies. In fact, the sheer number of different types in development or production may indicate reflect inefficiency due to competing industrial and bureaucratic interests.

The Ababil “Swallow” entered service in the 1980s, possibly serving as a kamikaze weapon against Iraqi forces. The following Ababil-2 and Ababil-3 models introduced more general surveillance roles with modernized sensors, video feeds, and greater use of lightweight composite materials. Recently, the Ababil-3 and a knockoff called the Atlas have been adapted to serve as a UCAV armed with Qaem-1 precision-guided bombs.

However, the older twin-tail Ababil-2T variant has achieved greater notoriety due to Tehran’s transfer of the drones to armed groups in the Middle East.

Hezbollah received at least eight to twelve Ababil-2Ts, which were redesignated the Mirsad-1s and fitted with up to 110-pounds of explosives. Several overflew Israeli airspace in a 2006 war with Israel, and at least two were shot down by IDF F-16s. Hezbollah claims to have retired the Mirsads in 2018. Hamas Shebab kamikaze drones used in the May 2021 Gaza War also appear to be derived from (but not identical to) the Ababil.

The Houthi drones, which still bear Iranian serial numbers, are designated the Qasef-1 and Qasef-2K, with conventional and air-bursting warheads respectively. The Houthis employ Qasefs to target phased-array radars of Saudi Patriot air defense systems to improve the penetration chances of their ballistic missile attacks. Furthermore, an attack by a Qasef drone in 2019 killed a Yemeni intelligence chief at al-Anad airbase in 2019.

In 2018 Houthi rebels began fielding the more capable Sammad drone. While the Sammad-1 has a surveillance role, the Sammad-2 (or UAV-X) recon/kamikaze drone can carry a forty-pound warhead and the Sammad-3 allegedly has an extended attack range of 932 miles. While the Sammad doesn’t correspond to a known Iranian drone, it uses several Iranian drone components, as well as German motors acquired by Iran via a Greek company.

Sammad-3s were used in an attack on a Saudi oil processing facility in 2019 that cut that country’s oil production by half for two days. They were also reportedly in two strikes on Dubai International Airport. Saudi F-15 and F-16 jets have shot down many Qasef drones and Sammad drones with Sidewinder missiles, as you can see in this remarkable footage.

Often loitering munitions are called upon to hit targets much closer to the frontline. The Ra’ad 85, which is employed by the IRGC, has a range of sixty-two miles and can plunge onto a designated target at up to 155 miles per hour, which allegedly could even include helicopters. In one instance in 2015, five Ra’ads struck Syrian rebels holding a meeting in Idlib province.

Iran has also developed a container-launched anti-radar drone that can be carried atop a small car and allegedly attack targets at long distances (more than nine hundred miles). This type of loitering munition could prove difficult to detect prior to launch, and might be reasonably accurate by relying on integrated artificial intelligence to home in on the emissions of active ground- or sea-based air defense radars. To what extent the Arash’s control/artificial intelligence scheme is more flexible than that of a radar-homing cruise missile is unclear, however.

This two-part series surveys the characteristics and operational use of the most prominent armed drones currently in Iranian service. This article focuses on single-use “kamikaze” drones, also known as loitering munitions, designed to be crashed into targets once located. The second part of this series will look at Iran’s reusable Unmanned Combat Air Vehicles, which can engage targets with missiles and bombs.