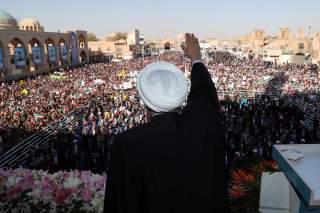 Iranian protesters and factions within the government are fighting two parallel battles: one for control of the streets and another for domination over cyberspace.

A near-total Internet blockade has drawn a dark curtain over Iran as demonstrators clash with police over massive gas price hikes. But what little information is available suggests a dark situation is unfolding.

“The Trump administration's sanctions have wrought a desperate situation in the country and have helped impoverish the population,” said National Iranian American Council senior research analyst Sina Toossi. “Amid the country's heightened securitized atmosphere, the Iranian government is asserting a more ironfisted approach than has been seen in years.”

President Hassan Rouhani announced a plan to cut fuel consumption on Friday night—the Iranian equivalent of a Sunday night. His administration promised to offset the gas-price hikes with Andrew Yang-style cash payments to families, but it was not enough to quell the growing popular rage.

Soon after reports of protests began to emerge, Iran’s external Internet connections went dark. The speed of the shutdown suggests the government was expecting heavy backlash.

Relatively few images have slipped through the government’s electronic filters, which appears to be blocking any communication between Iran and the outside world, while allowing internal traffic to continue.

These gruesome photos and videos paint a picture of brutal clashes between security forces and mostly-unarmed protesters across Iran. Amnesty International counted 106 deaths in the first four days of protests—and that number is likely to grow. The government claimed that five security forces were killed, including three Basij paramilitaries stabbed to death.

Videos seem to be breaking through the Internet filter in bursts, making it difficult to put the images in context. Amateur citizen-journalists have begun whispering the time and date as they record scenes from across the country, helping to form a coherent timeline.

An undated video shows protesters chasing security forces off the streets in Sattarkhan, a central neighborhood in Tehran. In another video from the Sadeqiyeh Square, about a mile away, a nervous cameraman whispers “Wednesday, November 20” as he passes by an armored police vehicle on a pacified street.

The government is painting itself as the bastion of law and order as it cracks down. The semi-official Mehr News Agency broadcast images of fires and looting set to sad music, as well as an infographic claiming that “the fire of the riots” has inflicted a little over two trillion tomans of property damage, equivalent to about $625 billion. These statistics could not be independently confirmed. 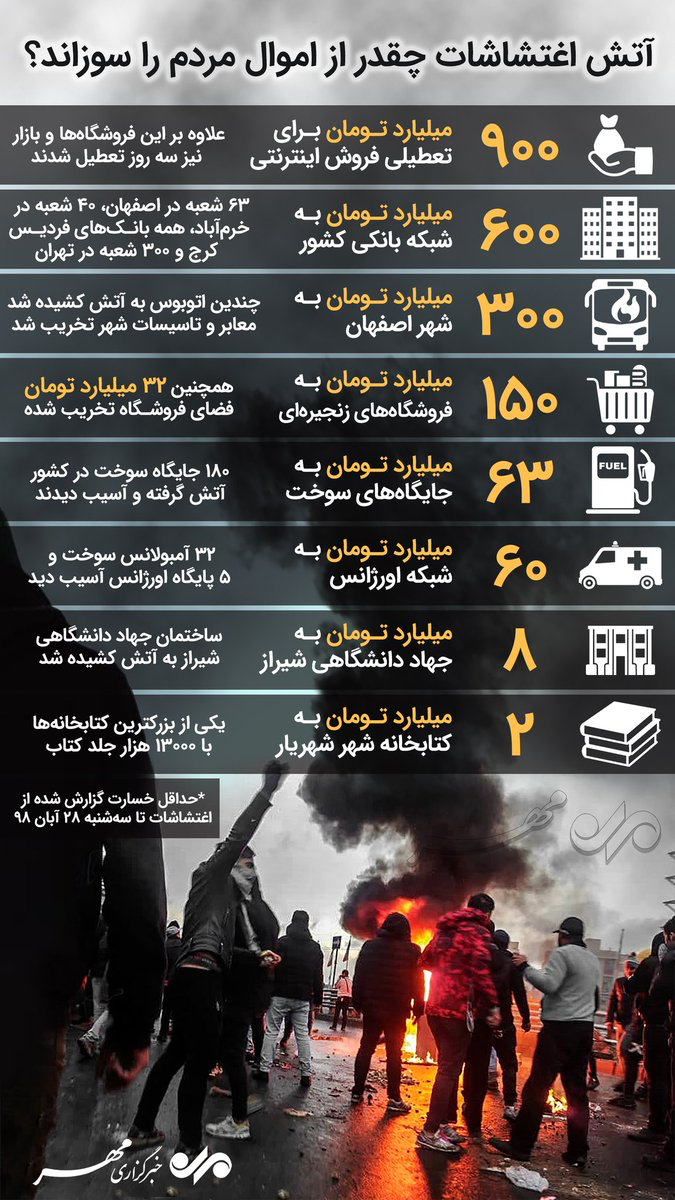 “In these incidents, people proved that they know the conspiracies of the enemies and terrorists, and are not deceived by them,” Rouhani told his cabinet, “but the hooligans were well organized and armed, acting on behalf of the regional reactionaries, the Zionists and Americans.”

Unrest seems to be heaviest in a band of poorer, rural provinces stretching from Kurdistan in the west to Ahvaz in the south. Some cities are predominantly Persian while others are inhabited by ethnic minorities such as Kurds and Arabs. The issue of Kurdish and Iranian Arab independence has long been sensitive in Iran.

But the faction poised to take the most advantage may be the hardline Conservatives, who are now pushing a bill to impeach Rouhani and Ali Larijani, the moderate Conservative speaker of parliament.

“I said, I am not an expert, but if the three branches [of government] make a decision, I support it,” he said in a Sunday speech. “Some people are becoming anxious or uncomfortable from this decision . . . but setting fire to banks is not the work of the people. It is the work of villains.”

“Notably, when the price hike was first announced, social media channels affiliated with the Revolutionary Guards promoted people abandoning their cars in traffic, leading many to speculate that hardline forces sought to trigger and use protests to weaken their moderate and reformist rivals,” Toossi told the National Interest.

The Revolutionary Guards is a branch of the military closely aligned with Khamenei, hardline Conservatives, and the Iranian deep state.

Rouhani’s coalition of Reformists and moderate Conservatives are on the back foot ahead of parliamentary elections in February 2020. Rouhani has suffered a series of political disasters since the last elections in 2016.

First, protests erupted across the country in December 2017, beginning as Conservative-sponsored attacks on Rouhani but growing to threaten the entire system. Then, President Donald Trump replaced the 2015 nuclear agreement between Iran and major world powers—Rouhani’s signature achievement—with a “maximum pressure” campaign aimed at destroying the Iranian economy.

Rouhani has since taken a hard tack to the right on foreign policy and civil liberties issues. Even then, his newly-confrontational foreign policy has blown up as protests in Lebanon and Iraq threaten Iranian-backed political parties in both countries.

As the hardliners attempt to throw Rouhani under the bus, he may have gotten in one parting blow. On Sunday night, The Intercept and the New York Times published a trove of leaked documents on Iran’s intelligence operations in Iraq.

The leaks painted Maj. Gen. Qassem Suleimani as “a dangerous self-promoter using the anti-ISIS campaign as a launching pad for a political career back home in Iran.” Soleimani has become a charismatic figure in Iran for leading the Revolutionary Guards in Iraq and Syria.

The leaked papers did not come from the Revolutionary Guards. They came from Rouhani’s own Ministry of Intelligence.

“If the situation continues to deteriorate, many signs indicate Rouhani, Larijani, and other moderate and reformist elements of the regime will be made scapegoats,” Toossi said. “This may have been the goal of the hardliner-dominated Iranian deep state all along.”