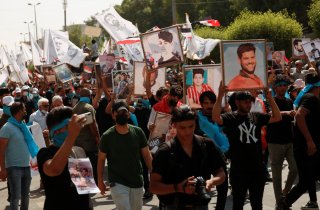 The enormous nationwide protests that erupted across Iraq in October 2019 led to a number of consequential changes in the country’s governance. The protests led then-Prime Minister Adil Abdul-Mahdi to announce his resignation in November 2019; six months later, in May, he left office. Abdul-Mahdi’s successor, current PM Mustafa al-Kadhimi, announced that early elections would be held by the end of 2021, one of the main demands of the protest movement.

After a delay of roughly a year, those elections are scheduled to take place on Saturday. They are being held after significant alterations to the country’s electoral system—notably creating smaller electoral districts. These are thought to better represent Iraqis locally and allow alienated groups, which formed the core of the October 2019 protests, a voice in government.

In spite of these changes, however, many Iraqis remain disaffected with the current government, which has remained largely unchanged since 2019 and is widely understood to be corrupt. They have noted that previous election cycles have usually resulted in little change, and the country’s political system is dominated by corrupt elites. Some have argued that by voting in the upcoming elections, they are implicitly showing support for the current system; for this reason, those protesters intend to boycott the vote, hoping lower turnout will represent a sign that the government as a whole is not legitimate in Iraqi eyes.

Iraq today is experiencing its most stable time since the 2003 U.S.-led invasion. While Islamic State (ISIS) cells have continued to wage a low-level insurgency, the number of civilian deaths in the country has dropped precipitously from five years ago, during the terror group’s largest territorial extent, and the country’s existing disagreements have, to some extent, been fought with words rather than bullets. However, while the overall number of civilian deaths has decreased since ISIS’s heyday, violence remains endemic in the country. In particular, the boycotters have highlighted the assassinations of several high-profile activists, which were blamed on pro-Iranian militias.

While turnout in the election is expected to be low, some Iraqis have pushed back against the boycotters, noting that electoral boycotts rarely work and are usually counterproductive, and urged Iraqis to vote for reformist parties. Notably, Grand Ayatollah Ali al-Sistani, Iraqi Shiites’ highest religious authority, has given his approval for the election, describing it as “the best way to achieve a peaceful future” for the country. This factor is likely to push up turnout among the Shi’a, although voter registration has already ended.