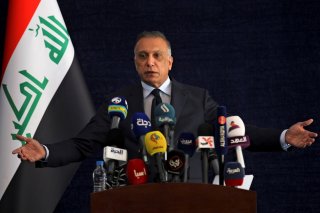 On November 18, Iraq’s foreign minister condemned a rocket attack the previous day in Baghdad’s Green Zone, calling it a “terrorist act.” Foreign Minister Fuad Hussein’s statement came hours after four rockets landed inside the heavily fortified diplomatic site, wounding five people and killing a child. This latest round of rocket fire signaled an end to an informal truce announced by Iranian-backed militias last month to pause attacks targeting U.S. military personnel in Iraq. According to Iraqi officials, one rocket landed just 2,000 feet from the U.S. embassy compound. An Iraqi military spokesman stated the incident would not go without “prosecution and accountability.”

In the unexpected October 10 “ceasefire” statement, Iranian-linked militias announced their intention to halt attacks on U.S. interests in Iraq, including Baghdad’s fortified Green Zone, under the condition that a plan for the withdrawal of U.S. troops was verified.

For over a year, Baghdad’s Green Zone has been the target of an unprecedented number of rocket and mortar strikes. Although these attacks largely go unclaimed, it is widely suspected that Iranian-linked militias within Iraq’s Popular Mobilization Units (PMU) are the culprits. PMU groups like Kataib Hezbollah and Asa’ib Ahl al-Haq initially existed in Iraq to aid in the fight against ISIS but have been warped into lawless units guided by Iranian interests. Since the PMU technically function as part of the Iraqi Security Forces, militia members are able to act with virtual impunity even as they openly defy Iraqi law and counter the prime minister’s interests.

Iraqi prime minister Mustafa al-Kadhimi has been struggling to curtail the actions of these Iranian-backed Shia militias since the onset of his premiership in May. Kadhimi’s ascension to power followed months of instability and increased domestic violence at the hands of Iranian-linked militias. In late 2019, anti-Iran protests swept the Middle East. PMU groups and other Iranian proxies violently cracked down on demonstrators in Iraq and Lebanon, resulting in over 500 deaths. In early January, U.S. forces assassinated prominent Iranian Revolutionary Guard Corps (IRGC) Maj. Gen. Qassem Soleimani in a targeted airstrike. In response, Iranian proxies have repeatedly targeted the U.S. presence in Iraq with constant rocket attacks.

In late September, U.S. Secretary of State Mike Pompeo warned Iraqi leaders that the embassy would close unless Iraq reined in the rogue Iranian-backed militias that have attacked U.S. interests in Bagdad. Following the informal “ceasefire” announcement in mid-October, there was a cessation in targeted airstrikes in Baghdad. The timing of the November 17 attack is questionable since it occurred just one hour after the Pentagon announced an incoming troop reduction in Iraq from 3,000 to 2,500. A Kataib Hezbollah official told The Associated Press that the group wants to see a “full withdrawal, not a partial one.”

President Barack Obama withdrew all U.S. troops from Iraq in 2011. In 2014, at the invitation of the Iraqi government, U.S. troops were welcomed back to help Iraqi forces combat the surging threat posed by the Islamic State. Remnants of the Islamic State are still active in Northern Iraq near the Iranian border. In late October, five civilians, including a Shiite sheikh who was reportedly active in the fight against ISIS, were brutally executed by the terrorist group. The week before, ISIS reportedly attacked a sub-district in the same region with mortars and claimed responsibility for various other attacks in the region.

Prime Minister Kadhimi and U.S. Secretary of State Pompeo discussed the future of U.S.-Iraqi cooperation in the fight against terrorism during a phone call on November 17. Specifically, they discussed the “future of cooperation between Iraq and the international coalition led by the United States of America, in light of the growing Iraqi capabilities in combating terrorism.” U.S. officials in the Trump administration have been supportive of withdrawals in principle and a planned troop reduction schedule has been underway in Iraq for months.

Meanwhile, President Donald Trump plans to reduce the number of U.S. troops in several countries before he leaves office, including Afghanistan, Somalia, and Iraq. The Trump administration reportedly plans to reduce U.S. troops in Iraq by 500, leaving 2,500. This is a change from what Trump officials announced in September 2020 when they said the U.S. troop presence in Iraq would be cut from 5,200 to 3,000 by January 2021.

As the anniversary of Soleimani’s death approaches, Iranian-linked militants in Iraq will likely escalate their frequency of attacks targeting U.S. military personnel and diplomatic sites in Baghdad. Prime Minister Kadhimi will have to balance newly independent anti-ISIS operations with countering an expected onslaught of violence from PMU groups with a reduced U.S. troop presence.

Maya Carlin is an Analyst at the Center for Security Policy, located in Washington D.C. She also holds an MA in Counter-terrorism from IDC Herzliya, located in Israel.