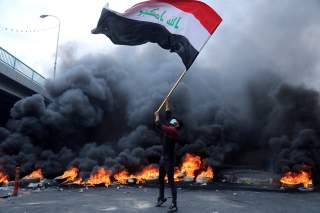 Youth-led protests have rocked Iraq for several weeks, and crackdowns by the state and militia groups have killed hundreds of protests. But a rare intervention from Ayatollah Ali Sistani, usually reluctant to dirty his hands with politics, was the tipping point.

“The religious authority . . . reaffirms the forbiddenness of attacking peaceful protesters and preventing them from exercising their right to demand reform,” Sistani’s office said in a Friday statement. “The Parliament from which the current government emerged is invited to revisit its options in this affair and behave in accordance with the interests of Iraq, the preservation of its sons’ blood, and avoidance of a cycle of violence, chaos, and destruction.”

Sistani called for electoral legislation “in preparation for free and fair elections whose results sincerely reflect the will of the Iraqi people.”

Abdul-Mahdi had spent time in nearly every Iraqi center of power: the Ba’ath Party, the Community Party, the Supreme Council of the Islamic Revolution, and the U.S.-led transitional government.

But the circumspect Arabic statement from Sistani’s office was enough to bring him down. On Sunday, the Iraqi parliament accepted Abdul-Mahdi’s resignation.

In an astonishing face-heel turn, Sairoon—an alliance between the Communist Party and the nationalist cleric Muqtada Sadr—called for Abdul-Mahdi to be tried for the deaths of protesters. The previous month, Sairoon had refused to accept his resignation.

“Abdul-Mahdi is not responsible for Iraq's political morass, nor is he the reason for Iranian influence in Iraq—in fact, he has always been more a favorite of Washington than Tehran,” said Professor Vali Nasr of the Johns Hopkins School of Advanced International Studies. “He is a victim of the times.”

“Sistani has always taken a position of reflecting and defending the people. Adil Abdul-Mahdi was unable to calm the situation, and was responsible for violent crackdown on protesters,” he told the National Interest. “Sistani in effect helped get Iraqi politics past the current impasse by forcing a change at the top.”

“The pressure for Abdul-Mahdi to step down is not personally directed at him,” said Sarhang Hamasaeed, director of Middle East Programs at the U.S. Institute of Peace. “It is a signal to the political class that they need to change the government. Reform cannot happen under its watch, if this many people have been killed, and this many thousands have been injured.”

Sistani, the head of Najaf’s Shi’a Muslim seminary schools, is usually slow to intervene in Iraqi politics. But when he does, Sistani’s voice is earth-shattering. His objections to the U.S. invasion of Iraq in 2003 even influenced a United Nations Security Council resolution in 2005.

“[Iraqi religious leaders] believe that the role of Sistani, the Grand Ayatollah, and the religious establishment, is simply to play a religious role and provide guidance to the people and not interfere in politics,” Hamaseed told the National Interest. “He is seen positively as a bulwark against Iranian influence in Iraq. He is seen as a positive moderate voice to prevent the country sliding into more violence. He is seen as someone who has played a positive role in preserving Iraq’s democracy.”

“Iraqi politicians and the Iraqi public have gotten accustomed to his style and decoding what he’s asking for,” he continued. “In all elections except the last elections in 2018, he asked the Iraqis to go vote and people responded. Last year, he said people are free to go to vote, and that was interpreted as his discomfort with the political class and the electoral process, so actually turnout was extremely low.”

Sistani directly intervened, however, when it seemed like Iraq was facing an existential threat. He called on Shi’a Muslims to take up arms in defense of their country. Thousands heeded his call, forming the militias that are now more powerful than the Iraqi Army.

Although the war against ISIS is over, Iraq is facing another round of unrest that could threaten the country’s stability yet again. On October 1, protests broke out in Baghdad over against mismanagement, corruption, and economic desperation.

“Iraq’s protests reflect long-running frustrations with corruption and mismanagement, which can be expressed without fear now that the threat of ISIS is gone,” Nasr said. “With that war at end Iraqis are turning their attention to Baghdad and their own leaders.”

Militias, many of them backed by neighboring Iran, responded with deadly force. As of November 30, over four hundred people have died in the crackdown, and almost twenty thousand were injured.

“These widespread protests highlighted Iraq’s longstanding governance failures that the government must address to help eliminate the conditions that gave rise to ISIS and previously al Qaeda in Iraq,” the Pentagon, U.S. Department of State, and U.S. Agency for International Development warned in a joint report to Congress on November 19.

In some parts of the country, the protests took on an anti-Iran tone. Protesters ransacked the Iranian consulate in Najaf on November 28, and security forces killed fifty-two people—including eighteen in Najaf—the next day.

Ambassador Iraj Masjedi, the Iranian ambassador to Iraq, referred to the Najaf protesters as “villains,” echoing the language used by Iran’s Supreme Leader Ayatollah Ali Khamanei against protesters inside Iran.

The outburst of violence in Iraq’s holiest city may have been “signaling to Sistani that the situation is sliding more towards violence if the political class are not taking changes and reforms seriously," Hamaseed said.

“For a long time, politicians in Washington for a long time have considered Iraq ‘lost to Iran,’ and the Shi'a of Iraq ‘just do whatever Iran tells them,’” Hamasaeed said. “I think this shows there is a force like Sistani wanting Iraq not to be under the influence of Iran, and wanting to preserve democracy in Iraq, and wanting better governance for the country.”