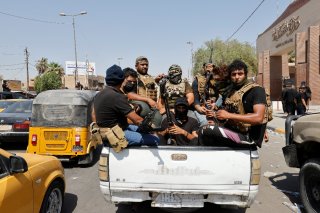 Iraqi supporters of the influential Shia cleric-turned-political leader Muqtada al-Sadr have left Baghdad’s heavily fortified Green Zone following a day of extreme violence in which thirty people were killed and more than seven hundred were injured.

The crisis in Baghdad swiftly de-escalated after Sadr called on his followers to end their protest and return to their homes. During his speech—broadcast live on Iraqi television—Sadrists remaining in the Green Zone dismantled their tents and left, allowing municipal workers to clean the area. Shortly after Sadr’s remarks, the Iraqi Army announced that it would suspend a 7 pm curfew that it had instituted the previous day in response to the violence.

Iraq’s most recent and most severe round of violence prompted conciliatory comments from Iraqi president Barham Salih and Prime Minister Mustafa al-Kadhimi, who have led the country through its political crisis over the last ten months. Kadhimi indicated that he would “vacate his post” if the unrest could not be addressed, while Salih pledged that the country would hold “new, early elections in accordance with a national consensus.”

The Iraqi president portrayed new elections as the only solution to Iraq’s intractable and multifaceted political crisis, which has persisted since Sadr’s political party, the Shia Sadrist Movement, won a decisive victory in Iraq’s general election in late 2021. Although Sadr initially vowed to form a government through alliances with sympathetic Sunni and Kurdish parties, he failed to gain the support of two-thirds of the parliament, the number required to elect a new president and form a government. After months of failed coalition negotiations—far exceeding the timeframe established in Iraq’s constitution—the Sadrists broke the deadlock by simultaneously resigning from parliament, allowing the pro-Iran opposition to gain power. However, Sadr continued to support public demonstrations, and after the new majority threatened to appoint a strongly pro-Iran prime minister, Sadrists stormed the Green Zone and occupied the parliament building, obstructing further legislative sessions.

The latest round of violence occurred after Sadr claimed that he would permanently retire from politics, provoking anger from many of his supporters and leading them to march on the Green Zone once more. After the demonstrators clashed with security forces and pro-Iran protesters, the cleric pledged that he would go on a hunger strike until the use of violence ceased, and the Iraqi armed forces imposed several measures, including road closures and a curfew, intended to curb the outbreak of additional violence.