ISIS Announces It Will Keep Fighting in a New Video 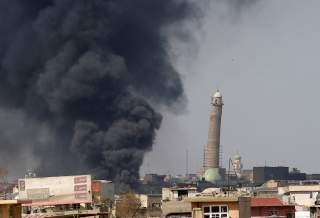 Following the complete collapse of the Islamic State’s (IS) self-styled Caliphate in Syria and the subsequent Sunday Easter bombings in Sri Lanka, the reclusive IS leader Abu Bakr Al-Baghdadi appeared in a rare eighteen-minute video. Baghdadi reassured IS militants that he was alive, spirited and committed to jihadism notwithstanding recent setbacks.

In the video, released by IS’ al-Furqan media network, Baghdadi has copied the style of Al-Qaeda’s founder Osama Bin Laden: sitting cross-legged with a dyed beard and an Ak-47 kept against the wall next to him. Baghdadi frames the defeat in Baghuz as a lost battle in a long-war which is ongoing and urged his fighters to fight on. Baghdadi maintained that IS fighters fought valiantly in Baghuz and that the Caliphate has not been abandoned. As a proof, Baghdadi accepts the baya (oaths of allegiance) from militant groups in Burkina Faso and Mali, showing that IS is spreading and alerts his fighters of a “long battle” ahead.

Tactically, the video is aimed at dispelling the impression of crippling military defeats in Syria.

It has also quashed all rumors of Baghdadi’s demise or critical injuries in recent fighting. In terms of its timing, the video has been released ahead of Ramadan, when IS appeals its cadres to step up their attacks.

Strategically, the video is an attempt to create a new narrative around the “Revenge Campaign” for the lost Caliphate. This “revenge campaign” is not a reactionary strategy but an offensive move to stay relevant as the most feared terrorist groups in the world and the leader of the global jihadist movement. For instance, despite numerous setbacks, IS carried as many as 3,670 terrorist attacks in 2018, the most by any terrorist group in the world.

Organizationally, IS is evolving from a quasi-state to an insurgent and a terrorist group. IS has become weak at the center and strong at the periphery. According to noted terrorism scholar Bruce Hoffman, IS has redirected its focus from the center to branches enabling it to survive and expand. Likewise, the IS propaganda narrative has shifted from joining and protecting the Caliphate to taking revenge for its losses. In cyberspace, the IS online community has migrated from open-end social media platforms to encrypted ones and the dark web.

Baghdadi’s video is simultaneously a bold and desperate move by IS. Since his self-proclamation to Caliphate in Iraq’s Al-Nuri mosque in June 2014, this is the second time that Baghdadi has appeared in a video. In the interim, he had issued several audio statements but did not appear in a video. On the one hand, it is an aggressive move: signaling his opponents that he is alive and indicating to his supporters that he is still leading the organization with full command and authority. On the other hand, the video could compromise his security as it could give critical leads to the intelligence agencies about his whereabouts to track and hunt him down. After all, Baghdadi is the most wanted terrorist in the world with a head bounty of $25 million.

Unlike various Al-Qaeda videos, which were all talk and no action, Baghdadi came out with a video after one of the most devastating attacks in South Asia’s violence-prone history. An attack followed by a video will help IS in its drive for global expansion. It will inspire IS’ global network of supporters and sympathizers to stay loyal to the global jihadist group and carry out attacks in its name.

There will be wide-ranging implications of Baghdadi’s video. In the immediate term, it will stall IS’ downward slide and allow it some breathing space to recuperate. It might also result in a spike in IS-inspired and directed terrorist attacks. Additionally, the video will encourage the self-radicalized jihadist networks such as the National Tawheed Jamaat (NTJ), mainly responsible for Sri Lanka bombings, to link with IS and launch attacks in their names. IS is quite skillful in exploiting the sectarian and communal fault lines to grow in ungoverned space of fragile states like Sri Lanka, Pakistan, Afghanistan, Somalia, Nigeria, Iraq and Syria.

After recent setbacks, IS expectations would increase from its eight official affiliates in Asia and Africa and two dozen worldwide networks. IS’ Af-Pak franchise, the Islamic State of Khorasan (ISK), is the deadliest and most potent of its eight affiliates. Since its emergence, ISK has carried out several high-profile attacks in Afghanistan and Pakistan. Most of ISK’s cadres are former militants of the Tehrik-e-Taliban Pakistan (TTP). So, the terrorist attacks by IS in Afghanistan and Pakistan are likely to increase, particularly when the US is expected to withdraw from Afghanistan. The ISK will try to exploit the vacuum in a post-US Afghanistan.

In sum, IS is far from defeated and still poses the most formidable threat to global peace and security. Improved intelligence and coordinated counter-terrorist operations would be needed to dismantle IS’ residual operational capabilities which allow it to link with various like-minded Islamist networks to pull off sophisticated attacks. Clearly, the loss of territory has not dented IS capability to carry out violent attacks: the two are not coterminous with each other. Going forward, denting IS’ ideological narrative is as important as downgrading its operational and organizational prowess.

Abdul Basit is an Associate Research Fellow (ARF) at the S. Rajaratnam School of International Studies (RSIS), Singapore. He can be reached at [email protected].