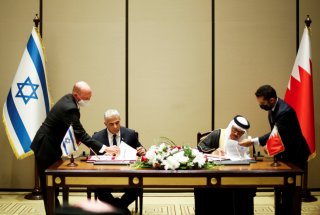 The Israeli Ministry of Defense announced on Thursday that it signed a security cooperation agreement with Bahrain, the small Arab state that normalized relations with Israel in 2020 as part of the Abraham Accords.

“The [memorandum of understanding] framework will support any future cooperation in the areas of intelligence, mil-to-mil [military-to-military], industrial collaboration and more,” the ministry’s statement read.

The Israel-Bahrain agreement is the first such agreement negotiated between Israel and any Gulf state. The security agreement comes on the heels of a similar agreement that Israel and Morocco signed in November 2021.

The agreement was reached after Israel’s minister of defense, Benny Gantz, visited for talks with his Bahraini counterpart and King Hamad bin Isa Al-Khalifa, the country’s monarch.

“Only one year following the signing of the Accords, we have achieved an important defense agreement which will contribute to the security of both countries and the stability of the region,” Gantz said, according to the defense ministry.

During his trip, Gantz also visited the headquarters of the U.S. Navy’s Fifth Fleet, which is stationed in Bahrain. The Israeli defense minister praised the “ironclad cooperation” of the United States and Israel, calling it “more important than ever” in a statement on Twitter.

Israel and Bahrain, though divided by other political considerations, including the issue of Palestinian statehood, have grown closer as Iran’s regional activities have increased. Iranian forces are suspected of carrying out several attacks against ships in the Gulf in recent months. In Yemen, Tehran has supported the Houthis, while Bahrain participates in the Saudi Arabia-led international coalition against the group.

Israel and Bahrain regard Iran as a mutual enemy and have stepped up their cooperation in response to Tehran’s perceived threat. Tel Aviv recently participated in a set of U.S.-led naval exercises in the Red Sea alongside Bahrain, Saudi Arabia, and Oman. Bahrain’s domestic political opposition has condemned the government for participating in the Saudi-led coalition in Yemen and for its relationship with Israel, which it has characterized as a betrayal of the Palestinians. Prior to the Abraham Accords, the Arab states’ unanimous position was that recognition of Israel would be contingent on an acceptable solution to the Palestinian issue.

Although Bahrain is ruled by a Sunni monarchy and a class of elites, the country’s population is composed mostly of Shia Muslims. This dynamic has often led to tensions in Bahrain.