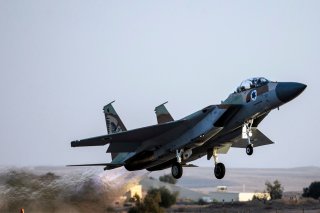 The Israeli Air Force conducted a missile strike against a Syrian airport on Friday night, destroying a facility used by the Hezbollah militant group to assemble drones, according to the London-based Syrian Observatory for Human Rights.

“According to SOHR sources, military logistics and equipment used to assemble Iranian-made drones in Dimas military airport area … were destroyed after being directly targeted by Israeli missiles,” the SOHR report read. It emphasized that “shipments of weapons, ammunition, and parts to manufacture drones” had first arrived at the airport in January, and the area was completely controlled by Iranian-backed militias throughout the year.

“Moreover, Hezbollah members were conducting drilling operations in and around the airport to store strategic weapons brought by Iran to the area close to the Syrian-Lebanese border,” the statement continued. “Sources said experts from Iran’s ‘Revolutionary Guard’ and some experts from Lebanon’s Hezbollah who have trained in Iran were seen in Dimas airport.”

The strike, which took place near the city of Dimas in southwestern Syria, destroyed the facility and damaged a runway and a radar system at the airport. No casualties were initially reported. Israel’s Yedioth Ahronoth newspaper reported in the aftermath of the strike that it had been conducted with Israeli missiles and had been successful, although Syria’s air defense network had shot down most of the projectiles.

Dimas is located near Syria’s border with Lebanon, and the Israeli newspaper indicated that the facility had been part of a wider smuggling operation intended to move missile components from Iran, where the individual pieces are manufactured, into Lebanon, where Hezbollah stockpiles the completed missiles in preparation for a future war with Israel.

The missile attack reportedly targeted Hezbollah’s Unit 4400, a branch of the Lebanese militant group reportedly close to Iran’s Islamic Revolutionary Guard Corps (IRGC). In particular, Unit 4400 is suspected of links to Unit 190 of the IRGC’s Quds Force, the branch of Iran’s military tasked with overseeing the activity of Tehran’s allied foreign militia groups.

Hezbollah, the most successful and widely known of Iran’s foreign proxy forces, operates both as a militant group and a political party in Lebanon. In addition to its thirteen seats in the country’s parliament, the group’s secretary-general, Hassan Nasrallah, has boasted that it has 100,000 men under arms and a stockpile of more than 130,000 short- and medium-range missiles for use against Tel Aviv.