Is It Time for the Second Kingdom of Libya? 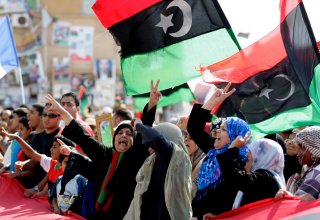 Those who deny that history repeats itself should take a look at recent Libyan history. Almost three-quarters of a century ago, following the defeat of the Axis forces in Libya during World War II, the issue of the destiny of the former Italian colony arose. Not unlike today, the international community was divided on how to deal with Libya. Interestingly, the same major international players currently present on the scene were already there in the 1940s. The United States, the Soviet Union, the United Kingdom, France, and Italy were all competing for some amount of presence in the country. Turkey, now actively engaged in Libya, had at the time quit the competition, but only after several centuries of dominating Libya, which ended with its surrender of the country to Italy in 1912.

Some of these international players, however, exhibited a better capacity for decisive action during World War II than they seem to be capable of nowadays. In particular, the UK, the United States, and France realized the bearing of Libya’s strategic location on their respective national interests and proceeded accordingly. Britain needed a military presence close to Egypt and the Suez Canal, and Cyrenaica (East Libya) was ideal for the purpose. This agreement was indeed later formalized in 1953 through a treaty giving Britain access to Aladam Air Base.

The United States also wanted a share of the Libyan strategic sphere, in this case, the Wheelus Air Base in Tripolitania (West Libya). An agreement on this was similarly formalized in 1954. At the time, Libya was one of the poorest countries in the world. Thus, the rental proceeds of the two facilities constituted the bulk of Libya’s national income for several years before the discovery of oil. France did not need a military base in Libya, but was keen on its stability, especially in Fezzan (Southwest Libya), as it was bordering France’s North African and Sahel colonies. In short, each of the three powers recognized the strategic importance of the three provinces of Libya and acted accordingly.

Although they represented the national interests of three distinct actors, the international parties involved came to grasp the fundamental reality that the stability of any of the three Libyan territories was dependent on their unity. Despite vast expanses of desert separating them, the three territories are closer to each other than to any neighboring region. They have far too much connecting them demographically and culturally to be treated as separate entities.

The United States, in particular, recognized the need for a reliable head of state who could ensure such unity in order to guarantee the stability necessary for the U.S. presence in West Libya to continue. On the ground, national movements and demonstrations rallying for unity under the leadership of Emir Idris Al-Senussi provided just that solution. As emir of Cyrenaica, and having garnered the allegiance of the people of Tripolitania in 1920, Idris was the only national figure who enjoyed both nationwide consensus and international confidence. Had it not been for Idris, who was the right man at the right time, and the convergence between national and international interests, modern Libya would never have seen the light of day.

Libya’s independence in 1951 may therefore be one of the rare examples of an auspicious confluence of national and international concerns. The needs of a poor, occupied country for independence, economic support, stability, and unity were reconciled with the interests of three international powers.

If Libyan history is truly repeating itself, then it is doing so unkindly considering the current intra-Libyan violent conflicts and ferocious rivalries. Despite the existence of some factions and disputes in the 1940s, the wisdom of its founding fathers, who realized that none of the three provinces could survive apart from the others, prevailed. Notwithstanding certain limitations, the eighteen years that followed were an exemplary era of unity, stability, and prosperity, especially when compared to the post-monarchy era. Unfortunately, those conditions are absent today, with the petty factionalism that had been dormant for decades currently rearing its ugly head.

Over the course of the past ten years, the international community and United Nations Support Mission in Libya (UNSMIL) have struggled to address the deteriorating conditions in Libya. Two Berlin conferences and the Geneva dialogues were the most recent attempts to rectify the crisis in Libya. The United States, in coordination with UNSMIL, has been highly influential in brokering a ceasefire. What is of most concern today is the formation of the Libyan Political Dialogue Forum (LPDF) and elections scheduled for December 24, 2021, a nostalgic, albeit ironic, allusion to the day of deliverance under Idris’s leadership.

The promised elections are packaged in two segments, parliamentary and presidential. Assuming that free and transparent elections are possible amid the turmoil overrunning Libya, a newly elected parliament would only replicate the present one in terms of internal rivalries, corruption, and lack of meaningful impact.

In theory, presidential elections could be the way out. Many Libyans hope for a charismatic and strong persona, who would negotiate the departure of all foreign military personnel, unify the armed forces, and hold a constitutional referendum. However, it seems highly unlikely that the various internal factions and external powers would voluntarily set the country free from the grip of militias and foreign forces.

A great disappointment may be in store for those who harbor the illusion that free and transparent presidential elections will take place this coming December and will be recognized by the competing domestic and external forces. The country may instead be headed to another civil war, this time ending in the country’s final fragmentation, flinging open the gates for a flood of terrorists into Libya and illegal immigrants to Europe. In other words, the potential for another Afghanistan is real.

Those who set the unrealistic date of December 24 do not seem to be aware that they were functionally setting a date that may make or break the future of Libya. A sense of foreboding is creeping as that date approaches. Meanwhile, in contrast to the proactive attitude toward the Libyan question in the 1940s, the present international position is characterized by indecision and opaqueness, if not overt hypocrisy as far as some parties are concerned.

Is there any glimmer of hope in this otherwise bleak picture? Those who were interested in saving Libya in the postwar era found the way out through the Independence Constitution promulgated by the National Assembly in 1951. It offered a representative system of government and political and social freedoms which were exemplary for the region. In light of the lack of a constitutional basis in Libya, this constitution (as amended in 1963) is the only legitimate foundation for political action.

The constitution has not been repealed by any democratic action and was only suspended by the 1969 military coup which was itself devoid of any legitimacy. Notwithstanding the lack of opinion polls gauging support for a return to the monarchical system, calls for such a system are steadily rising on the ground. The exceedingly low satisfaction rate with the present situation is the best index for the desire for drastic change.

Perhaps it is time for a Second National Assembly to be convened by the interested international parties to reactivate the Independence Constitution and the royal system that was based around it. The restoration of the monarchy and the implementation of the Independence Constitution would have to be backed up by the concerned parties with all appropriate means. The Crown Prince, His Royal Highness Mohammad El Hasan el Rida el Senussi, would then assume his responsibilities as the King of Libya, bringing with him the same unifying powers his forefathers exemplified.

After so many decades of mismanagement and corruption, it is about time for a head of state who cares about the future of the country. A figure with integrity and steadfastness, transcending partisan politics and factional interests, is necessary to restore national unity and reconciliation. The same constitution through which Libya found salvation seven decades ago may still be the path for the restoration of Libya’s unity and stability.

Dr. Abdurrahman Habil is the former Libyan Minister of Culture and Member of the Board of Directors of the Central Bank of Libya.