It's Time To Get U.S. Nukes Out Of Turkey 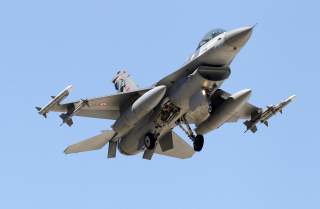 U.S.-Turkish relations have plunged to a new nadir. In the past month, a senior Republican senator has suggested suspending Turkey’s membership in the NATO alliance, while the secretary of state implied a readiness to use military force against America’s wayward ally.

In these circumstances, U.S. nuclear weapons have no business in Turkey. It is time to bring them home.

The signs of a strained and deteriorating relationship are hard to miss. President Recep Tayyip Erdogan, Turkey’s increasingly autocratic leader, has turned away from both Europe and the United States. He instead is actively cultivating a close relationship with fellow authoritarian Vladimir Putin, as evidenced by their eight meetings just this year.

Erdogan rejected buying U.S. Patriot air defense missiles in favor of Russian S-400s—missiles that are incompatible with NATO’s integrated air defense system. As a result, the United States excluded Turkey from taking part in the F-35 Joint Strike Fighter program, leaving the question of Turkey’s next-generation fighter literally up in the air.

Following President Donald Trump’s rash decision to withdraw the small U.S. military contingent from eastern Syria, Erdogan launched the Turkish army on a major offensive. In doing so, he showed no regard for the Kurdish forces that did so much in collaboration with the U.S. military to destroy ISIS at great cost—some ten thousand Kurdish fighters killed. At one point, Turkish artillery bracketed a position still occupied by U.S. troops. Trump has threatened various sanctions and repeatedly expressed his readiness to “devastate” the Turkish economy.

One other worrying matter. Erdogan says he wants nuclear weapons. In September, he told his political party: “Some countries have missiles with nuclear warheads. But the West insists ‘we can’t have them.’ This, I cannot accept.”

Turkey is not the place to host U.S. nuclear arms.

According to the Federation of American Scientists, the U.S. military maintains 150 B61 nuclear gravity bombs in Europe for use in conflict by the U.S. and certain allied air forces. Reportedly, fifty of those are located at an American facility at the Turkish airbase at Incirlik (bases in Germany, the Netherlands, Belgium and Italy host the other one hundred). The 39th Weapons Systems Security Group, numbering about five hundred U.S. Air Force personnel, secures and maintains the bombs at Incirlik.

The United States has deployed nuclear weapons in Europe going back to the 1950s, though the number today is drastically lower than the peak of more than seven thousand in the 1970s. The long-stated purpose of these deployments has been to help deter an attack against NATO member states in Europe while reassuring European allies of America’s commitment to their defense.

Ten years ago, many in Europe questioned the need for such forward-basing of U.S. nuclear arms. That talk has become muted as Moscow adopted a belligerent attitude toward the West, and the Russian military seized Crimea and provoked an armed conflict in eastern Ukraine.

Washington and NATO still see a need for American nuclear bombs in Europe. While any use of a nuclear weapon would have a military effect, the Alliance has come to regard these bombs as having primarily a political purpose: deterrence and, should deterrence fail and a conflict break out, to signal (by their use) that matters are about to escalate to potentially horrific levels and thus bring the conflict to an end.

The one hundred B61 bombs deployed at bases in NATO countries other than Turkey can fulfill those requirements. There is no requirement to have U.S. nuclear weapons on the territory of five NATO members in order to deter attack and provide assurance to the twenty-seven European members of the Alliance; that can readily be done with B61 bombs based in four countries.

Moreover, while the U.S., German, Dutch, Belgian and Italian air forces each have dual-capable aircraft certified to carry nuclear weapons and crews trained in nuclear delivery, questions arose some time ago as to whether that is so with the Turkish Air Force. In that case, the most likely scenario in which a Turkish-based nuclear bomb would be used would envisage a U.S. fighter flying into Incirlik, loading a B61 bomb, and then taking off to fly to and strike its target. It would seem much simpler to launch a nuclear-armed U.S. F-16 from its base at Aviano, Italy.

The rationale for maintaining nuclear weapons at Incirlik becomes more dubious by the day. It is time for the U.S. Air Force to bring them home.