Jamal Khashoggi and Ruhollah Zam: How Murders of Journalists Impact the JCPOA 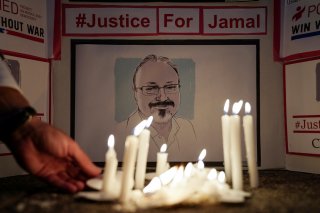 Government killings of journalists are particularly reprehensible violations of human rights. In addition to the injustice done to the victims themselves and the sufferings of their families, these murders represent an assault on the freedom of the press, undermining prospects for a democratic public sphere. That suppression is the real goal.

The credibility of the international community’s commitment to the freedom of the press depends on its response to these egregious assaults. This holds especially for the United States with its aspirations for human-rights advocacy. The gravity of the matter becomes clear through a comparison of two tragic cases, the murder of Saudi critic and Washington Post columnist Jamal Khashoggi on October 2, 2018, by agents of the Saudi government, and the hanging of Ruhollah Zam, an  Iranian internet journalist and influential critic of the regime in Tehran, on December 12, 2020.

The Khashoggi killing was particularly gruesome. Lured into the Saudi consulate in Istanbul in order to receive documents, he was murdered and dismembered by a team sent expressly for that purpose. Turkish intelligence released tapes proving the killing, the CIA claimed Saudi culpability, as did the UN Special Rapporteur on Extrajudicial Killings. After initial denials, the Saudi government conceded that a premeditated murder had taken place; a trial in Riyadh ended with the conviction of eight of the eleven defendants.

The United States used the Global Magnitsky Act to sanction seventeen Saudi officials for their responsibility in the killing, and President Donald Trump denounced the murder. Yet calls proliferated for a more extensive response, including the curtailment of aspects of the U.S.-Saudi security relationship and an explicit condemnation of the Saudi Crown Prince, Mohammed bin Salman. For many, the matter still remains unresolved two years later, creating a cloud that hangs over the future of U.S.-Saudi relations.

Now there is the case of Ruhollah Zam. His participation in the 2009 protest wave in Iran landed him, scion of a prominent reform-oriented clerical family,  in notorious Evin Prison. After his release, he fled to France where he lived in exile. His Telegram channel, Amandnews, with nearly a million and a half followers, fueled the protests of 2017–2018. Although he reportedly benefited from the protection provided by French intelligence forces, he voluntarily left France in October 2019, traveling to Iraq in the belief that he would meet with influential political allies there. Instead, he fell into a trap when Iraqi forces immediately arrested him and delivered him into the hands of the Iranian Revolutionary Guards. The Islamic Revolutionary Court in Tehran found him guilty of promoting “corruption on earth,” issuing a death sentence which was carried out last week. The International Bar Association has denounced the outcome as “judicial murder,” and Reporters Without Borders lay the blame for this “new crime of Iranian justice” squarely at the feet of the Supreme Leader Ayatollah Ali Khamenei.

The Zam execution has also been strongly condemned in the U.S. Secretary of State Mike Pompeo described the killing as “unjust, barbaric,” but he also pointed out how this attack on press freedom is consistent with the track record of the Iranian regime, adding that “Zam exposed the brutality and corruption of the regime, which has killed or arrested more than 860 journalists in its 41-year reign of terror.” Pompeo has been the leading advocate of the Trump administration’s hard-line policy toward Iran. Yet key foreign policy figures of the incoming Biden administration have issued similar condemnations. Jake Sullivan, designated as next National Security Advisor, and Anthony Blinken, presumably Pompeo’s successor, responded on Twitter, stating that “Iran’s execution of Ruhollah Zam, a journalist who was denied due process and sentenced for exercising his universal rights, is another horrifying human rights violation by the Iranian regime.”

This rare congruence between outgoing and incoming administration perspectives cannot hide the very real challenge that the killing of Zam poses to the Biden team: can it credibly return to the Joint Comprehensive Plan of Action (JCPOA), the Obama administration’s “Iran Deal,” as it has promised, and still pretend to value human rights?

This is where the legacy of the Khashoggi murder casts a long shadow. The human-rights community remains deeply critical of the Trump administration for not attributing responsibility for his murder to the highest level of responsibility in Saudi Arabia, just as others call for significant reductions in the cooperation between Washington and Riyadh. Should not the same metric apply to the murder of journalists in Iran?

It is difficult to see how the Biden administration will be able to give Iran the enormous gift of a lifting of the sanctions imposed by Pompeo’s “maximum pressure” policy while Tehran continues to flaunt its brutal disregard for the same human rights that President-elect Joe Biden wants to inscribe as the watchword of American foreign policy.

Instead, Biden, Blinken and Sullivan should call out Khamanei’s guilt in the murder of this journalist, and hundreds of others. Which other Iranian officials are implicated and deserve sanctions under Global Magnitsky? Which Iraqi officials bear responsibility for complying with an extradition request that was sure to lead to execution, in violation of international norms? And were other foreign intelligence services involved in a cloak and dagger gambit around Zam, as has been suggested in the French press? If too many stones were left unturned in the Khashoggi case, then the next administration has a chance to do better. Will it?

The Biden administration can of course just make good on its campaign promise and rush back into the JCPOA.  Alternatively, it could follow through on its claims to value human rights. The arrest and execution of Ruhollah Zam make it clear, however, that these are two very divergent paths. Biden will have to choose between them. He can’t have it both ways.