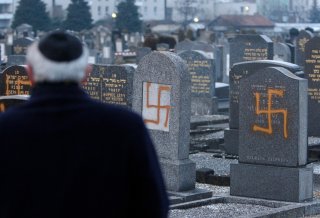 In 2016, following major attacks targeting Jewish and Israeli targets around the world, and based on earlier text adopted by the European Monitoring Centre on Racism and Xenophobia, the government-based International Holocaust Remembrance Alliance (IHRA) published a two-page working definition of anti-Semitism. This initiative was designed to fill the vacuum that fostered ineffective policies and willful blindness in countering the sources of hate crimes directed specifically at Jews.

The authors included a number of examples, some of which relate to Israel and the “new” anti-Zionist form of anti-Semitism, which, along with traditional sources, uses the hate-inducing language and images of the Soviet era. These include “denying the Jewish people their right to self-determination,” applying double standards not “demanded of any other democratic nation,” using symbols “associated with classic anti-Semitism…to characterize Israel or Israelis” or comparing “contemporary Israeli policy to that of the Nazis.”

Since 2016, this document has been formally adopted by thirty governments, mainly in Europe, North America, and Australia, as well as by international institutions. In addition, a number of parliaments and municipalities have endorsed the text, and, in many cases, universities and other important frameworks use the definition in the form of guidelines for assessing antisemitic behavior.

But for some ideological activists—particularly Boycott, Divestment, and Sanctions (BDS) supporters—the Israel-related examples of anti-Semitism are unacceptable and are portrayed, or distorted, as attempts to “silence criticism” of Israeli policies, or even as “threats to democracy.” Under the banner of “progressive values,” influential groups that frequently critique Israel—including J-Street, the New Israel Fund, and American Friends of Peace Now—pushed the claim that the “codification of the IHRA working definition,” specifically its “contemporary examples,” create the potential for misuse to “suppress legitimate free speech” and prevent “criticism of Israeli government actions.”

And in Germany, of all places, a group of self-described “cultural leaders” associated with the far Left launched a highly publicized effort to rescind the Bundestag resolution that adopted the working definition and referred to BDS as a form of anti-Semitism. This group includes Stefanie Schüler-Springorum, who uses her position as head of the Center for Research on Antisemitism in Berlin to promote demonization of Israel, As Professor Jeffrey Herf has written, her center strictly avoids dealing with virulent anti-Zionism of the Soviet and East German regimes, as well as the Islamist contribution.

Reinforcing these efforts, and overlapping in a number of areas, another professionally promoted public relations campaign to undermine the IHRA consensus was launched under the heading of the Jerusalem Declaration on Antisemitism (JDA). Falsely claiming support from “leading scholars of antisemitism,” the funding source is carefully hidden, and the website—created at the last minute, with anonymous ownership—is registered in Iceland. (As is often the case, the progressive democratic values claimed by this group do not extend to funding transparency.) Ostensibly developed under the auspices of the highly ideological Van Leer Institute in Jerusalem, three of the eight “coordinators” including Schüler-Springorum, as well as a number of signatories, were also leaders of the German campaign. It is not surprising that the JDA manifesto repeats much of the language in the other attacks. It is also possible that they arranged the funding.

In the first examples, some follow the language in the original (IHRA) version, but others are notably absent—the labeling of double standards as anti-Semitic or “drawing comparisons of contemporary Israeli policy to that of the Nazis.” Both aspects are part of the BDS movement—by removing them from the definition of anti-Semitism, the JDA group seeks to give itself space for this form of anti-Israel discrimination. And in comparison to the IHRA’s clear statement that “Denying the Jewish people their right to self-determination, e.g., by claiming that the existence of a State of Israel is a racist endeavor” is anti-Semitism, the JDA version stands out as Orwellian doublespeak—“Denying the right of Jews in the State of Israel to exist and flourish, collectively and individually, as Jews, in accordance with the principle of equality.”

The second supposedly “non-antisemitic” examples proceed to develop the core anti-Zionist and pro-BDS objectives, as notoriously embraced by some of the better-known signatories, including Richard Falk. These include “supporting the Palestinian demand for justice and the full grant of their … rights” (often a euphemism for replacing Israel); promoting alternatives to a Jewish state (i.e., various “arrangements for Jews and Palestinians in the area between the Jordan River and the Mediterranean”; “criticism of Israel as a state…its institutions and founding principles….” In addition, they claim that “it is not antisemitic, in and of itself, to compare Israel with other historical cases, including settler-colonialism or apartheid”; and—the core sleight-of-hand behind the manifesto, “Boycott, divestment and sanctions are commonplace, non-violent forms of political protest against states. In the Israeli case they are not, in and of themselves, antisemitic.”

The frequent use of weasel words such as “on the face of it” and “in and of itself/themselves” is also significant, as noted by Prof. Matthias Küntzel. Ideological warfare is rarely one-dimensional, and arguments made to conform to legitimate and widely accepted norms are then interpreted and twisted far beyond the range of the simple language “on the face of it.” A careful reading of the JDA text and context shows that while pretending to be neutral on the legitimacy of Israel and Zionism, their primary goal is delegitimation.

Of particular note is that by investing major resources in delegitimizing the IHRA definition, they marginalize the core issues of anti-Semitism and the escalating attacks against Jews and Jewish institutions. According to the JDA, “anti-Semitism has certain distinctive features,” but these are minor, while, in the spirit of progressive values and intersectionality, “the fight against it is inseparable from the overall fight against all forms of racial, ethnic, cultural, religious, and gender discrimination.” In other words, any definition of anti-Semitism is unnecessary, particularly when it hampers “free speech” necessary for singling out Israelis and justifying hatred.

In contrast, the IHRA working definition is the most effective means of countering the poisonous incitement that leads to assaults. By politicizing and undermining this consensus, the JDA and the wider counter-IHRA campaigns are opening the door for even more violence targeting Israeli and Jewish institutions.

Gerald M. Steinberg is emeritus professor of political science at Bar Ilan University in Israel, and heads the Institute for NGO Research in Jerusalem.

Asaf Romirowsky is executive director of Scholars for Peace in the Middle East (SPME), and a senior non-resident fellow at the Begin-Sadat Center for Strategic Studies (BESA).