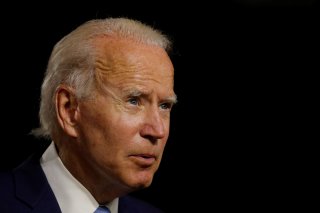 Joe Biden is having a good few weeks. Less than ninety days before the November election, as President Donald Trump continues to flounder over the pandemic, the former vice president’s poll numbers remain steadily high. His recent pick for running mate, Senator Kamala Harris, was positively received by most pundits, and the decision led to a new record for single-day campaign fundraising. Barring an October surprise, the Biden-Harris ticket has an excellent chance to win in November and return to the White House in January. If this should happen, it is worth considering the security issues that a President Biden would encounter, and how he would confront them.

Trump’s chaotic term in the Oval Office has made it clear that one of his successor’s largest challenges will be in dealing with Iran. The United States and the Islamic Republic have come perilously close to war several times during the Trump administration, most recently with the assassination of Quds Force Commander Maj. Gen. Qassim Suleimani in January. Though both sides ultimately backed away from a military confrontation, American-Iranian relations remain at a historic low point.

The basis for Trump’s “maximum pressure” Iran strategy has been that sanctions could be used to weaken or destabilize Iran, inducing the regime to yield to American demands. Four years in, this does not seem to have worked. When Trump scrapped President Barack Obama’s negotiated Joint Comprehensive Plan of Action (JCPOA) and resumed harsh sanctions on Iran, he promised that doing so would limit Iran’s regional adventurism and its ability to enrich uranium. During his term, however, Iran has both resumed its enrichment activities and expanded the scope of its foreign policy. Moreover, far from destabilizing the Iranian regime, Trump’s aggressive approach may have helped to discredit the moderate faction within Iran and empower hardliners who are far less receptive to American interests. Purely in terms of regional security, it is difficult to argue that the current administration’s policy of disengagement and sanctions has outperformed Obama’s diplomatic approach.

If and when Biden re-enters the White House, one of his priorities must be to improve stability in the Middle East. To do so, he is likely to pursue diplomacy with Iran, re-establishing a basic working relationship and some level of mutual trust. How, and whether, Biden will accomplish this will be a key challenge of his presidency.

In negotiating with Iran, Biden is presented immediately with a conundrum: the Islamic Republic is clearly a hostile actor with a long history of malign action throughout the region. Tehran funds Hamas and Hezbollah, two organizations classified by the United States as terrorist groups. It aided Bashar al-Assad during his brutal campaign against his own people. The Shi’ite militias it sponsors in Iraq helped to defeat the Islamic State, but Iran continues to use them to exert control over its neighbor; it is no coincidence that Suleimani was inside Iraq at the time of his assassination. Finally, Iran supports the Houthi rebels in Yemen with advisors and military equipment, prolonging the catastrophic civil war there.

However, Biden cannot ignore the fact that closer relations with Iran might be beneficial to American interests. In January 2016, during his tenure as vice president, ten American sailors in the Persian Gulf had mechanical trouble with one of their boats, drifted into Iranian waters, and were promptly taken prisoner by the Islamic Revolutionary Guard Corps. The incident was deeply embarrassing, particularly because it occurred within hours of President Obama’s scheduled State of the Union address. Fortunately, within minutes, diplomats on both sides began working to defuse the situation; former Secretary of State John Kerry and Iranian foreign minister Javad Zarif spoke five times that day, and both instructed their militaries not to make the situation worse through shows of force. Once it was clear that the trespassing was an accident rather than a nefarious plot, Iran agreed to release the sailors, and did so the next day. Rather than turning into a major diplomatic crisis, the incident became a footnote of the Obama presidency.

Kerry later emphasized that, several years earlier, the United States would not have been able to resolve the situation quickly, simply because the appropriate channels did not exist. The Swiss, who handle American affairs within Iran, would have been called in to negotiate on their behalf; in the meantime, hardliners on both sides would have threatened each other, raising the stakes and making an agreement harder to reach. The presence of functioning diplomatic channels, which almost certainly do not exist in the Trump White House, kept this from happening.

Biden’s first task will be to rebuild those channels. His second task will be to restore the JCPOA, which, for all its faults, put a temporary halt to Iran’s nuclear program. This could be a significant challenge. Iran’s parliament is now dominated by hardliners suspicious of negotiation with the United States. Perhaps worse, President Hassan Rouhani, who shepherded Iran through the JCPOA, faces the end of his term in early 2021, with no obvious successor. Even if Rouhani’s replacement agreed to negotiate, the Iranian people would naturally be suspicious of any new executive agreement, since, as the JCPOA showed, it could be undone overnight by a subsequent American administration.

On the other hand, Iran’s bargaining position is arguably worse today than it was in 2015. Although Trump’s sanctions have not apparently deterred Iran’s nuclear program or foreign policy, there is little question that they have done serious damage to the Iranian economy. These sanctions, combined with the enduring low price of oil, the political and economic consequences of the ongoing coronavirus outbreak, and the massive protests that the Iranian regime faces, present Biden with a unique opportunity to negotiate from a position of strength. A conditional offer of sanctions relief in exchange for a temporary suspension of nuclear enrichment—in effect, a renewal of the JCPOA—could be the basis for future diplomacy. If such a deal was successful and led to measurable benefits for Iranians, then further negotiations could follow.

Biden’s central goal in any Iran strategy he chooses must be to improve regional security. Broadly speaking, this consists of three separate objectives: lowering the risk of accidentally starting a war, curbing Iran’s support for hostile actors in the region, and preventing nuclear proliferation. By restoring diplomatic links with Iran and re-entering the JCPOA, a Biden administration would immediately make serious progress on two of these three objectives. If this progress were shown to be sustainable and not subject to cancellation by a future administration, then it would at least provide a foundation for future negotiations on Iran’s missile program and support for its regional proxies, which Trump’s approach does not. Finally, although the United States and Iran will likely remain adversaries no matter what agreements are reached, there will always be points on which they have common interests. For example, the current carnage in Yemen serves neither Iranian nor American objectives. Much could be done to prevent it if Iran agreed to cease arming the Houthis and America agreed to step back from its support of the Saudi-led coalition—a step that is already favored by Congress and most Americans.

Agreements between America and Iran will not be easy to negotiate, and more complexities will undoubtedly arise along the way. But under a Biden administration, it is likely that America will return to a fundamentally more nuanced Iran policy, centered on engagement and focused on negotiating specific, achievable objectives.