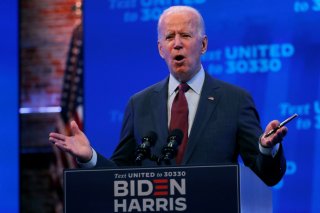 Outside of the United States, few peoples in the world are more impacted by the results of the U.S. presidential election than the citizens of Iran. President Donald Trump has subjected Iranians to the most punishing sanctions regime in the world, while also making clear his desire to make a deal that will make Iran “very rich, very quickly.” While Vice President Joe Biden has been critical of Trump’s Iran strategy, his own strategy views Iran—and its 80 million inhabitants—primarily through the prism of another nuclear deal. Both miss the point.

For years, U.S. administrations have sought to address the symptoms of Iranian malignancy—its nuclear ambitions and regional extremism—while ignoring the underlying cause, the nature of the Iranian regime. The reality is that as long as Iran is led by a small clique of unaccountable men who rule with an iron fist, America’s four decades of hostility with Iran will never be resolved. For this reason, promoting the cause of democracy and human rights in Iran should be a pillar of any U.S. national security strategy.

If Trump or Biden think they can normalize relations with Tehran, forty-one years of history tell us otherwise. Anti-Americanism, opposition to Israel, and compulsory hijab are the three pillars that uphold the regime. Wang Xiyue, a Chinese American scholar, was in Iran to conduct historical research but he detained by the Islamic Republic for 40 months. As he wrote, the Islamic Republic “has no interest in reconciling or normalizing relations with the United States, because doing so would invalidate the revolutionary regime’s raison d’être. The theocracy’s survival and its elite’s prosperity require maintaining hostility against the United States.”

Of course, it is Iranians that must change their country’s politics, not the United States. But it should be noted that Iranians are dying to change this brutal regime. Twice in the past three years, Iran has witnessed massive weeks-long protests across the length and breadth of the country which was only put down with brute force. Just last November, the Islamic Republic killed as many as 1,500 people, according to Reuters, as protests rocked more than 100 towns and cities. The Islamic Republic shut down the Internet for one week to stop the world from knowing the degree of clampdown. The regime arrested more than 7,000 protesters and is executing some of them. Three protesters had their sentences suspended only in the face of international outcry and tweets by world leaders.

When I had a chance to talk with Hillary Clinton last year, I told the former secretary of state that the Iranian people were unhappy with the Obama administration’s muted response to the clampdown of the 2009 protests. She said she regretted that decision. At that time, the Obama administration thought that placating Iran’s clerical leadership would lead to improved relations.

In its public statements and platform, the Biden campaign has shown little indication that the Iranian popular campaign for freedom would be relevant to its Iran strategy. Although it mentioned the names of executed Iranian activists such as wrestler Navid Afkari and the imprisoned human rights lawyer Nasrin Sotoudeh, the Biden team’s publicly articulated strategy focuses almost exclusively on how a Democratic administration would engage with the leaders of the Islamic Republic, with the ostensible hope that such engagement will moderate the nature of the Iranian regime. As the past four decades have proven, however, U.S. attempts to persuade the Islamic Republic into abandoning its longtime ideological principles will not be vindicated.

Stability in the region cannot come from negotiating with an unstable regime that is despised by the majority of its own people. The Islamic Republic has sanctioned us, the Iranian people, for forty years from our basic rights. We are banned from having free elections, there is no freedom of religion, nor do we have a free press or an independent judiciary. This is an apartheid regime that discriminates based on gender, religion, and ethnicity. As for women, all our basic rights have been sanctioned and we are treated as second-class citizens who cannot enter stadiums or choose what to wear. There is no freedom to protest and we are even banned from social media.

The reality is that my country has been taken hostage, and under these conditions talking with the Iranian leaders is like negotiating with the hostage-takers without any care or concern about the condition of the hostage.

Instead of focusing primarily on how to cut a deal with the Islamic Republic, the Biden campaign should apply its domestic policy principles to its foreign policy strategy. While the Democratic Party leaders rightly call for greater rights for women and minorities, holding the security services accountable, insisting on judicial independence in the United States, they should not ignore the Islamic Republic’s systemic abuse of its own people and terrorizing of much of the region. The new administration should insist on upholding values they cherish such as human rights, women’s rights, a free press, and democratic elections.

We, the Iranian people, need moral leadership from the next U.S. president to help us fight back against the oppression of the Islamic Republic. Overlooking its brutality for the sake of negotiations empowers this dictatorial regime to commit more crimes. Let’s hope the next U.S. president doesn’t bury human rights for the sake of an ephemeral deal.