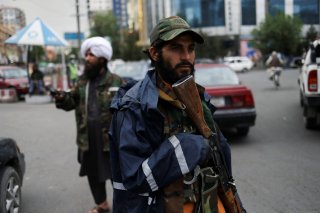 Sheikh Rahimullah Haqqani, an Afghan cleric affiliated with the Taliban, was killed in Afghanistan on Thursday by a suicide bomber linked to the Islamic State-Khorasan (ISIS-K) terror group.

A spokesman for the Taliban claimed that an ISIS-K militant had carried out the attack in a Kabul seminary where Haqqani had been speaking. The spokesman later told Reuters that the suicide bomber had concealed his explosives inside a plastic prosthetic leg and had not been searched prior to entering the seminary. ISIS-K claimed responsibility for the attack immediately after it took place, although the group claimed that it had happened inside Haqqani’s office instead of in public, contradicting eyewitnesses and existing video footage of the incident.

Prior to his death, Haqqani had been a supporter of the Taliban and had been widely considered one of the most important clerics linked to the group. Haqqani had been highly critical of ISIS-K, which has challenged the Taliban’s religious legitimacy on the basis that the group is uninterested in conducting attacks against non-Muslims outside of Afghanistan.

He is thought to be the most significant Taliban figure yet to have been assassinated by ISIS-K, and the Taliban spokesman described the attack as a “very huge loss for the Islamic Emirate of Afghanistan,” using the Taliban’s official name for its government.

In spite of his allegiance to the Taliban, Haqqani had previously issued opinions contradicting the group’s established policies. In early 2022, he issued a fatwa supporting girls’ education and condemning the Taliban’s closures of schools, which have continued since the group took control of Afghanistan last August. In an interview with BBC in May, the cleric claimed that there was “no justification in the shari’a to say female education is not allowed—no justification at all.” He observed that in any Islamic society, some women needed to undertake education and become doctors in order to treat other women, as male doctors could violate their modesty.

Prior to its successful suicide bombing, ISIS-K had targeted Haqqani with two earlier assassination attempts. In the second attempt on his life, ISIS-K militants bombed a religious school in Peshawar, Pakistan; Haqqani escaped unscathed, but the blast killed seven other people.

Despite sharing a last name, Haqqani is not related to the Haqqani Network, a large tribal faction in Afghanistan and Pakistan that has been closely linked to the Taliban and al-Qaeda.