The Kurdish Tragedy: What America Can Learn From Its Foreign Policy Fumbles in Iraq 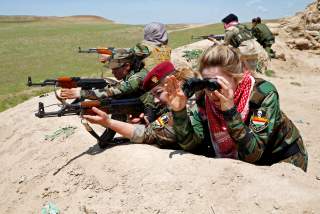 Although the Kurdish-led Syrian Democratic Forces (SDF) proved a vital partner in fighting the Islamic State, also known as ISIS, and its territory has served as a rare oasis of stability in a war-torn country, the October 2019 American pullout from the northern Syrian border region brought to bear the unrealistic notion of an enduring American partnership with the SDF and the unclear nature of the U.S. presence. Given what we already know, it is surprising that America’s military and political leadership did not foresee this eventuality.

The Turkish army’s invasion into Kurdish-dominated SDF territory has resulted in over one hundred thousand internally-displaced persons and accusations of war crimes committed by Turkey and its militias. The invasion and the behavior of the invading forces have resulted in a widespread outcry from Western media sources, American politicians, and many of America’s allies. Despite this, the Syrian pullout should not have surprised anyone due to Turkey’s growing security concern of an empowered Syrian Kurdish enclave, the nature of the American-Turkish relationship, and America’s unclear policy regarding its long-term presence in Syria.

From the outset of the U.S.-Syrian Kurdish partnership, marked by the 2014 battle of Kobani, where the United States first provided Kurdish ground forces with air support, Turkey’s opposition and hostility to the arrangement should have signaled the political dilemma that would follow. The battle of Kobani marked not only the beginning of a U.S.-led effort to actively assist the Syrian Kurdish forces on the ground, the People’s Protection Units (YPG), but it also laid bare Turkey’s priority of curbing more nuanced Kurdish ambitions rather than combatting the obvious threat of a brutal ISIL that had abutted its southern flank.

Turkey’s rationale, that the YPG served as a Kurdistan Workers Party (PKK) offshoot was not without merit, and seeing as the United States recognized the PKK as a terrorist group this should have raised red flags at the very beginning for decisionmakers in Washington. However, this real concern was ignored by American officials, and continued gains by the YPG, then merging into the SDF, only exacerbated Turkey’s concerns. As a strategic NATO partner, albeit a noncooperative and often hostile one, Turkish concerns were always going to trump U.S. support for a tactical ally.

A lack of clarity in America’s goals and objectives in Syria past ISIS’s defeat also set the stage for a rapidly decreased presence. As SDF forces cleared ISIS out of the larger cities of Raqqa and Deir El-Zor in 2017, it became evident that ISIS’s future as a territory-holding force was coming to an end. For all the rightfully positive attention paid to the SDF for participation in the anti-ISIS campaign, there was no clear messaging from the U.S. Departments of State and Defense on how long U.S. forces would continue to support the SDF. There was also a lack of clarity about what a continued American presence hoped to achieve beyond the defeat of ISIS. The empowerment of Syrian Kurdish democratization efforts was less pronounced and unlikely to convince the Trump administration to maintain an American presence.

Furthermore, President Donald Trump publicly pronounced his dissatisfaction with keeping troops on the ground in Syria, threatening a complete pullout in 2018. At this point, warning bells should have sounded in the foreign policy and defense establishments that America’s future involvement in the Syrian conflict was in doubt. Furthermore, it should have been the signal for American leaders who wished to continue supporting the Syrian Kurds to develop plans for a smooth exit of U.S. forces with protective measures put in place for our Kurdish allies. Yet between Trump’s December 2018 announcement and his final decision to remove U.S. forces from the Northern Syrian border areas, there was a marked lack of preparation for such an eventuality, as it seemed many lawmakers and cabinet officials were caught off-guard, as evidenced by the rushed and chaotic American pullout.

Perhaps most representative of the uphill battle faced by the Syrian Kurds was how their lobbying efforts to maintain U.S. support were dwarfed in comparison to their Turkish adversaries. On Capitol Hill, money talks and Turkey has learned this lesson from its years of lobbying American legislators from issues such as not recognizing the Armenian Genocide to countering Greek interests in Cyprus.

The political wing of the SDF has gained sympathetic and supportive ears throughout the American foreign policy establishment. They managed to retain full access to American law-makers such as Sens. Marco Rubio (R-FL), Tim Kaine (D-Va.), and Ron Johnson (R-Wis.), all members of the Senate Foreign Relations Committee, and SDF leader Mazloum Abdi recently spoke with Trump. Kurdish advocacy has also been prominent in think tanks and American news outlets throughout the anti-ISIS campaign and on the heels of Turkey’s latest actions.

However, lobbying its interests to American lawmakers is nothing new to Turkey, as evidenced by $1.7 million spent as early as 2009. In 2018 alone, Turkey spent roughly $6.6 million in lobbying as compared to $120,000 by the Syrian Democratic Council. Furthermore, a long list of prominent Americans have officially lobbied on behalf of Turkey, including former CIA director Porter Gross, former Democratic Senate Majority Leader Tom Daschle, Trump’s former national security advisor, retired Lt. Gen. Mike Flynn, and others. How this fact and others escaped some of the more prominent members of Congress who vocally decried the U.S. pullout is surprising at the very least. Turkey’s entrenched position in Washington as a sixty-five-year NATO bulwark has undoubtedly provided it with financial and political advantages, but those who should have been most aware of this were the blindest.

It was always unrealistic to believe that a long-term strategy favoring the Syrian Kurds over a historic NATO partner would ever be possible, despite Turkey’s adversarial behavior. The heroic and costly efforts undertaken by the Syrian Kurds fighting ISIL have undoubtedly pulled at the heartstrings of the Western conscience, but this obscured the harsh realities.

The Obama administration, while recognizing the effectiveness of the Syrian Kurdish YPG in combating ISIS, seemingly ignored the concerns of a major NATO member for a short-term gain in defeating a threat that was barbarous but arguably contained in swaths of Syria and Iraq. Whether Trump believed this to be the case or not, his intention to pull out American troops from the border area was communicated well in advance of the events that took place in October 2019 and under no circumstances should U.S. policymakers and military leaders have been caught flat-footed.

Furthermore, six decades worth of ties with the United States provided Turkey with the know-how needed to navigate the circles of power in Washington. As bitter of a pill it is to swallow in watching a good and reliable partner fall under the thumb of hostile actors, policymakers and foreign policy experts can avoid future calamities by developing realistic and deliberative long-term strategies that support America’s diplomats and armed forces serving as the instruments of that policy. Instead, images of angry Syrian Kurds hurling vegetables at fleeing U.S. military convoys and Russian forces moving into the confines of recently-held American bases have been seared into our minds, the results of a short-sighted and unclear U.S. involvement in Syria.

Ryan Gardiner is currently an assistant managing editor for Young Professionals in Foreign Policy and previously served as an assistant managing editor for the Harvard Kennedy School's Journal of Middle Eastern Politics and Policy.  A graduate of Tufts University's Fletcher School and Navy veteran, Ryan was a Class of 2016 Presidential Management Fellow and currently works as an analyst in the Department of Homeland Security.