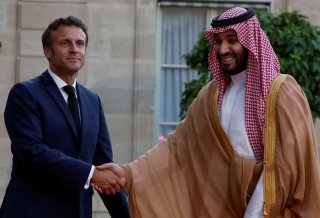 French president Emmanuel Macron met with Saudi crown prince Mohammed bin Salman, or MBS, during his visit to Paris on Thursday—a meeting that the French president held in defiance of protesters urging him to keep Saudi Arabia’s de facto leader at arm’s length.

Macron greeted MBS warmly at the Elysee Palace, the official residence of the French head of state, and was photographed shaking hands with him by France’s AFP news agency. After the handshake and photo op, the two men entered the palace and began a closed-door discussion; a French presidency official later claimed that Macron would discuss human rights in Saudi Arabia, and shared geopolitical concerns such as the Iran nuclear deal and the status of Saudi oil production.

MBS is visiting France as part of his tour of the European Union—the first such tour the Saudi crown prince has conducted since the murder of Washington Post journalist Jamal Khashoggi in Saudi Arabia’s consulate in Istanbul, Turkey, in 2018. Before he visited France, MBS also attended discussions in Greece, where he announced a bilateral renewable energy deal alongside Greek prime minister Kyriakos Mitsotakis in Athens.

The degree of MBS’s responsibility for Khashoggi’s murder remains a topic of contention. The UN’s investigation into the incident claimed there was no reason to suspect that the Saudi then-deputy leader was directly involved. However, the Central Intelligence Agency reportedly claimed that MBS had directly ordered the assassination, a conclusion shared by the Turkish government. Saudi Arabia has maintained that a rogue government “hit squad,” whose members have been heavily punished within the country, carried out the operation.

While many Western leaders, including President Joe Biden, initially vowed to keep their distance from MBS, the Saudi crown prince has grown in influence since Russia’s invasion of Ukraine, which led to a dramatic increase in global oil prices and led many of the same leaders to engage with him once more. Biden, who famously described Saudi Arabia as a “pariah” state during his presidential campaign in 2020 and vowed that the two of them would not speak during the first months of his presidency, was photographed fist-bumping MBS during his recent visit to Jeddah—a photo that many commentators described as signifying the Saudi crown prince’s rehabilitation in the United States.

Human rights organizations, however, condemned Macron’s meeting with MBS. Hatice Cengiz, Khashoggi’s fiancée at the time of his death, accused the French leader of bestowing “honors'' on an “executioner” during the visit.