Made In America: How the U.S. Government Paid For Turkey's War in Syria 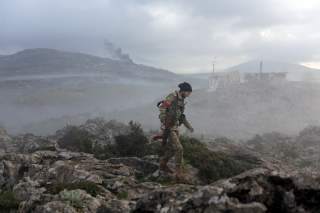 Some members of the Syrian opposition were happy to work within the framework of the SDF, but Turkey was not pleased, as it eyed the Syrian Kurds’ relationship with the militant Kurdistan Workers Party (PKK) inside its own borders.

Neither were some anti-Assad stalwarts and counter-Russia hawks, who believed that the SDF was a distraction from the real fight at best and collaborationists with Assad at worst.

“Iran is the enemy. President Obama didn't see it that way. He tried to create a concert system, a roundtable with the Soviets,” Doran added, correcting himself: “not the Soviets, the Russians.”

Bassam Barabandi, a former Syrian diplomat who defected to the United States in 2013, blamed Obama’s then-ongoing negotiations over Iran’s nuclear program. According to Barabandi, the Arab opposition in Syria wanted a solution to Assad, but Obama was unwilling to confront Iran on an issue other than nuclear research.

“The SDF were easy to play with,” he told the National Interest. “The SDF said, ‘we don’t care about Assad,’ because they were looking for their own short-term advantage.”

But McGurk said that Obama’s team had left Trump with three options: let the Russians finish ISIS off, deploy thousands of U.S. troops alongside Turkish troops and the Free Syrian Army, or arm and train the SDF. Trump chose to arm the SDF.

“We delayed the counter-ISIS campaign probably for over a year,” McGurk told the Foundation for the Defense of Democracies on October 21. “I’ve been hearing a lot about all these roads not traveled. We’ve traveled all these roads.”

“Turkey, throughout this process, has encouraged the United States to work with the Syrian opposition and presented that as a coherent and efficient and capable group of people” in order to fight ISIS, Bick told the National Interest. “What U.S. officials found over and over again is that the groups allied with Turkey…were not reliable, were not well-organized, and were not that numerous.”

Meanwhile, Trump attacked CIA support for Syrian rebels as “massive, dangerous, and wasteful” and cut the program in the summer of 2017.

Turkey deployed many of these groups when it invaded Afrin, an SDF-held territory in northwestern Syria.

After Jeffrey replaced McGurk, the new Syria team apparently held onto the hope of working with the Turkish-aligned opposition. As the National Interest previously reported, a State Department official tried to push the SDF to work with Turkish-backed groups, leading to a shouting match in September.

By October, Trump wanted out entirely. He announced that “Turkey will soon be moving forward with its long-planned operation” against the SDF on October 6, unleashing the current wave of violence in the northeast.

Some supporters of the Syrian opposition have distanced themselves from the Turkish-backed Syrian National Army.

“We cannot say that they are Free Syrian Army,” Barabandi said. “Most Syrians, they don’t appreciate or endorse or feel sympathy with these people.”

With many former U.S.-backed groups beyond the pale, the Trump administration may be trying to use the Arab components of the SDF to built a new anti-Assad force in the “oil region” of northeast Syria.

But McGurk had words of caution about the first attempt to do so.

“Presidents need to be very careful before they set national security objectives. When you say in 2011, ‘Assad must go,’ that changes everybody’s calculation,” he said. “It created a fever in the region. The amount of foreign jihadis and fighters pouring into Syria, and the amount of weapons and amount of money and everything else, led to a lot of this.”

“When that policy was set, the death toll in Syria was less than two thousand, which was tragic, but nothing like what we’ve seen since,” McGurk added.