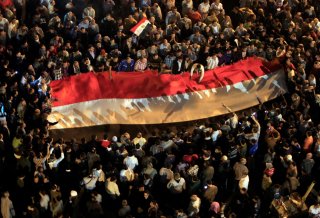 Susan Rice, in a New York Times op-ed, aptly described American democracy’s recent travails as a “near death experience.” Indeed, when I moved from Beirut to Washington, DC seven years ago, leaving the upheaval of the Arab Spring behind me, I did not expect to run into the winter of democracy in the United States. Yet here I was, feeling oddly at home, under the shadow of a president refusing to recognize the results of an election, leaning on the state apparatus to overturn the result, and hurriedly reshuffling key defense and security positions to prevent the transfer of power away from him.

U.S. foreign policy has been deeply controversial in the Middle East for at least the past seventy years, but the example of American democracy has been a steady drumbeat in the Middle East since the late nineteenth century. The fascination with the peaceful removal of leaders by a simple vote in the United States has always contrasted painfully with the inability of most Middle Eastern populations to do the same. Popular attempts to replace leaders have in most cases led to either fierce repression or state collapse and civil war.

Middle Eastern societies are still contending among three forms of government: authoritarian (traditional or secular), Islamist, and democratic. The example of democracy in America—and elsewhere to be sure—has been an inspiration to pro-democracy activists around the world, including in the Middle East. The risk of democracy’s demise in America threatened to cast a long dark shadow across the region and the world.

But the American democratic system—always much more than just the electoral moment itself—has weathered the storm. The voters have expressed their will to have Trump removed, and as Trump moved to overturn that outcome, the electoral institutions, as well as the court system, have proven able to resist and rebuff the threats of the chief executive. The importance of the role of institutions in sustaining democracy is particularly resonant in the Middle East where the executive branch generally dominates and dictates to other branches of government. American democracy’s near-death experience might make its survival and recovery all the more emotive in the Middle East.

But I am a realist: although a government chosen by and accountable to the people remains the preferred political system for respondents in virtually all region-wide opinion polls, democracy is unlikely to make major breakthroughs in the Middle East anytime soon, no matter what happens in the United States. While Tunisia makes a brave attempt forward, the power-sharing democracies of Lebanon and Iraq are sinking in corruption and near state failure, and the democratic period in Turkey has been eclipsed by the authoritarian crackdown of Erdogan. In all other parts of the region, government is authoritarian—secular, traditional, or Islamist—while in other countries, government has largely ceased to function at all: e.g. Yemen, Libya, parts of Syria.

What the region needs most is government, good government, and democratic government—in that order. The worst off societies are those with no government at all, the countries in civil war and state collapse such as Yemen, Libya, and parts of Syria. In those countries, the urgent priority is to bring an end to the civil war and rebuild the basic building blocks of functioning state and governance institutions. In the majority of states—from Morocco to Oman—that have persevered, they have had to contend with the additional challenges of a once-in-a-century pandemic and a contracting economy. Many of these states have done reasonably well in managing the crisis—in most cases, certainly better than the United States—but they need support and assistance in improving governance and building resilience as their societies and economies dig out of the pandemic in 2021.

In terms of democratic government, the fragile transition in Tunisia and the albeit flawed systems in Lebanon and Iraq deserve continued engagement and support.

America has regularly alternated between Republican and Democrat administrations. In previous transitions, that did not signify a threat or restoration of democracy, but this election was: in the election of Joe Biden most voters were focused on removing the threat to America’s democratic values and institutions that Trump represented, rather than greatly favoring Biden or swinging democratic or republican. Hence Biden will assume office with a particular mandate for standing up for democratic values and principles. Political development cannot and should not be imposed from abroad, but is up to the people and societies of the region; however, it is important to the people of the region that the United States return to standing up for its own values of an inclusive, open and democratic society.

Paul Salem is president of The Middle East Institute. He is the author and editor of a number of books and reports including, most recently, Escaping the Conflict Trap: Toward Ending Civil Wars in the Middle East (ed. with Ross Harrison, MEI 2019).