Muqtada al-Sadr Is Pushing Iraq's Democracy to the Brink 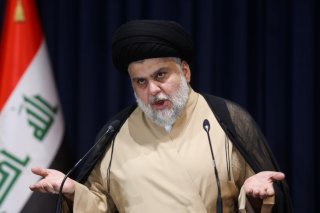 Currently, Iraq is in chaos. Muqtada al-Sadr refuses to negotiate over forming the next government and is preventing the Iraqi Parliament from electing a prime minister and president. Meanwhile, his supporters occupy Baghdad’s Green Zone, stymieing government affairs entirely. As such, the Iraqi sectarian divide is deepening, and the democratic process has gone awry.

It took years to spread democratic ideals and values among Iraqis. Forming an assembly popularly believed to be their representative body and a medium to settle political disputes is an even more delicate and challenging task.

While replacing the dictatorial values deeply embedded within the Iraqi political psyche has proven difficult, restoring them has been easy. Iraq has a parliamentary political system whose assembly, until recently, was relatively functional and checked its government. But when the Iraqi Parliament was stormed, it capsized that nascent democratic culture of tolerance and the peaceful transfer of power. On July 31, the Iraqi Army moved to Baghdad to foil a civil war. The armed parties—that is, almost all—are preparing to march on Baghdad when order breaks down.

When someone cannot defeat an institution, they resort to negating it. Accusing the state of being corrupt and a foreign puppet would invalidate it in the eyes of the Iraqi people. A debilitated and humiliated Parliament would no longer be a medium to settle political disputes.

In Iraqi culture, inviolability, fear, and ultimate authority are paramount prerequisites for legitimacy and leadership. Now, with the Iraqi Parliament humiliated, Sadr calls for its dissolution.

Viral images of an American who broke into the Capitol wearing a hat with horns and another who put his foot on House Speaker Nancy Pelosi’s desk were widely circulated on Iraqi social media. They were imitated when a young Iraqi wearing makeup and dressed femininely—which people consider inappropriate in Iraq—disrespected the Parliament with his fellow protesters by posing for photos with the speaker’s chair and podium. Many chanted for an end to corruption, believing that the Parliament was the guardian of corruption and bad governance.

The democratic culture created in the past decades—that the Parliament is sovereign and represents the people—is beginning to evaporate.

The reverse democratization of Iraq has begun in the name of reform, with the people debilitating and humiliating the Parliament. Though Sadr wants to make Iraq better, his methods are destructive.

Sadr’s Alliance Towards Reforms party got seventy-three seats in the 2021 elections. However, it could not form a government without the Coordination Framework (CF) parties.

When the Sadrists could not form a government, he instructed his members of Parliament to resign. However, when the Kurdish incumbent President Barham Salih looked likely to be reelected and the CF named Mohammed Shia’ Sudani as the likely candidate for prime minister, the Sadrists stormed the Parliament to foil their confirmation.

When pro-Iranian parties looked to block Sadr from forming a government, they obstructed Sadrists through legal means. They gathered enough lawmakers to prevent Parliament from confirming the president and the prime minister, a move known as the obstructing one-third. Meanwhile, Sadr and his allies, including those in the pro-American camp, are resorting to extra-legal measures.

Sadr disapproves of both Salih and Sudani. He rebukes and accuses others of incompetence. For instance, he tweeted that it is “very, very shameful that [Salih] is president of Iraq” after he did not sign a bill criminalizing relations with Israel.

Sadrists also accused Sudani of being a puppet controlled by foreigners, which is usually a reference to Iran, delegitimizing his candidacy and the Parliament for voting to elect a “puppet” to the most powerful position in the country. Sudani is a close ally of Nouri al-Maliki, a known pro-Iranian political figure; there are claims that Maliki wants to grasp the reins of power through him.

Sadr promises to distance Iraq from Iran and the United States and make Iraq strong again, which is another way of saying “Make Iraq Great Again.”

The populist cleric vows to avoid forming a government with the political establishment and the parties that have ruled Iraq since 2005 because they are the sources of corruption, and he is all for reform. Just like former U.S. president Donald Trump, he fights and slanders the political establishment. In his last speech, he accused the courts of being political and effectively promised to “drain the swamp.”

When Trump and Sadr could not defeat the institutions that prevented their designs, they resorted to slandering their political opponents. They tell their supporters that political institutions are just buildings and do not represent them.

There is no democracy without democrats. Now that democratic values and ideals have been “proven” wrong, Iraq is undergoing a massive democratic setback. As such, the restoration of military rule is possible. Now, thousands of Iraqis post pictures of Saddam Hussein and wish for his return; among them are Kurds and Shiites who witnessed genocide and massacre at his hands.

Since democracy is a culture, the United States possesses immense cultural powers, especially in Iraq, where the people closely follow American social, economic, and political culture. The setback for democracy in the United States also has ripple effects on the countries it democratizes.

Farhang Faraydoon Namdar is a researcher and journalist covering the Middle East. He is the former Editor in Chief of Birst newspaper. He has translated books and articles, including Francis Fukuyama’s State Building: Governance and World Order in the 21st Century, into Kurdish. He is a former researcher at Kurdistan Conflict and Crisis Research Centre (KCCRC) and is now News and Op-ed Editor at KurdSat News and KurdSat English.