Neither the U.S. or Iran Want a Full-Scale War. Here's Why. 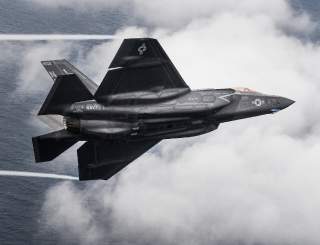 The most important takeaway from the crisis surrounding General Soleimani’s assassination is that neither Iran nor the United States is interested in escalating their confrontation to the level of a full-scale war. This becomes very clear when one looks at the carefully choreographed Iranian reaction to the assassination and President Trump’s press conference in which he dismissed the Iranian missile attack on two American bases in Iraq as an indication that Tehran was “standing down” from its confrontationist posture vis-à-vis the United States.

The Iranian reaction to Soleimani’s assassination clearly indicated that Tehran was not interested in inflicting so much damage on American assets, especially in terms of human casualties, that it would force Washington to take retaliatory measures on a scale that could lead the two countries down the slippery slope to war. Iran informed Baghdad hours in advance of its intention to attack the Ayn al-Asad and Erbil airbases. This information was promptly conveyed by Baghdad to Washington, which took immediate measures to ensure that no American lives would be lost thus obviating the necessity for retaliatory strikes on Iranian targets.

President Trump’s announcement that Iran’s missile attacks had not resulted in any American casualties disregarding the material damage inflicted on the two bases was equally well crafted to convey the impression that the attacks had failed in their primary purpose and, therefore, did not need any further retaliatory action. Both Washington and Tehran by their acts of omission and commission clearly signaled that they were withdrawing from the brink.

It is worthwhile exploring the reasons on both sides for this unwritten understanding that all-out war did not serve the purpose of either party.

The Iranian decision to de-escalate was based on some very hardheaded calculations. To begin with, Iran’s economy is in shambles thanks in large part to the incompetence, corruption and cronyism of the regime. It was kept afloat primarily by the export of oil in substantial quantities at relatively high prices that served both to provide money for governmental expenditures and subsidies to poorer sections of society thus maintaining support for the regime.

This strategy unraveled with President Trump’s decision in May 2018 to re-impose stringent economic sanctions, especially on the sale of Iranian oil, to force Iran to renegotiate the nuclear deal reached in 2015. These sanctions led to Iranian oil exports falling from 2.5 mbd in April 2018 to negligible quantities, especially after Washington refused to extend waivers in May 2019 for the eight largest importers of Iranian oil that had been temporarily exempted from these sanctions.

As a consequence, the Iranian economy has gone into a tailspin. The IMF has estimated that it is contracting at an annual rate of 9.5 percent. Inflation is around 40 percent and the World Bank estimates that 25 percent of Iranian youth are unemployed. The official rate of the Iranian riyal has fallen from 8000 to one US dollar in 2003 to 42000; the unofficial rate is pegged at 135,000. Consequently, the ability of Iranian companies to buy foreign components essential for manufacturing activities has been drastically curtailed.

These economic woes have been reflected in the political sphere. Protests erupted with increasing frequency in 2018 and 2019 culminating in massive demonstrations in November 2019 following the government’s decision to raise oil prices by 50 percent. These protests called for the downfall not only of the government but also of the Supreme Leader Ayatollah Khamenei and were reminiscent of the “Down with the Shah” slogans of the autumn of 1978. The response of the regime’s security forces was swift and brutal with hundreds of protestors shot down in cold blood.

While this ruthless repression led to the protests abating temporarily, they have flared up again in the past few weeks. The shooting down of a Ukrainian airliner by the IRGC that killed many Iranians settled in or visiting Canada lighted the fuse this time. But, the protests are fundamentally a sign of the unrest that has been brewing as a result of economic distress and political repression. This time around calls for the removal of the Supreme Leader are loud and clear, as are exhortations that the entire system of clerical dominated rule be dismantled.

The Iranian regime’s precarious domestic situation does not permit it to engage in a major confrontation with the United States. Iran’s international position reinforces this conclusion. It is true that Iran has been able to build a network of clients and proxies in Lebanon, Iraq and Syria. These networks may be helpful for Iran to increase its influence in parts of the Middle East but in the final analysis they are of marginal use as far as its confrontation with the U.S. is concerned. Hezbollah rockets hitting Israel are only likely to end up in a devastated Lebanon as a result of Israeli retaliation as happened in 2006. Iraqi militia attacks on American targets can at best act as pinpricks for Washington and bring disproportionate retaliation against Iranian strategic assets including nuclear facilities. These clientilist relationships were meant to counter regional adversaries, such as Saudi Arabia, and extend Tehran’s influence in the Arab world not to confront the United States in a major conflagration.

Iran may have some friends, such as Russia and Turkey, among external powers but it has no real allies. There is an overlap of interests between Iran and Russia in Syria – both support the Assad regime – but this does not translate into an alliance. Russia has stood by and seen Israel attack Iranian and Iranian-backed militia targets in Syria about two hundred times in the past two years without any attempt to warn off Israel. To expect Russia to come to the aid of Tehran in case of a major confrontation with the United States is a pipe dream and the Iranian regime is well aware of it.

Turkey may allow the smuggling of some Iranian oil through its territory and may also have coinciding interests with Iran in regard to preventing Kurdish autonomy, but Tehran cannot count on Ankara to come to its aid in a war with the United States. Turkey is a member of NATO and its defense relationship with the U.S., despite the recent spat in connection with Ankara acquiring the S-400 anti-missile systems from Russia, runs deep. At the most it might prevent the U.S. air force from using the Incirlik airbase in a war with Iran; but the U.S. has multiple assets in the region, especially in the Gulf, and is thus unlikely to need the use of the Incirlik base in the event of a war with Iran.

The Iranian regime is bereft both of external allies and of domestic legitimacy. A devastating war with the United States under these conditions would mean the almost certain unraveling of the Iranian political system and the downfall of the clerical regime.

As for the United States, President Trump’s reticence to enter into a major conflict can be explained by several factors. First, it is clear that he does not want to engage in another war in the Middle East in an election year both because of his repeated promises to bring American soldiers home, which won him many votes in 2016, and the unpredictability of how a war with Iran may end. It is likely that thousands of boots on the ground may be required to subdue Iran and a ground war may eventually lead the United States into an unwinnable quagmire before which Washington’s involvement in Iraq would appear like child’s play.

Second, a major conflict with Iran will most likely augment the credibility of his critics at home that the war is being launched to deflect attention from the impeachment process currently underway. This may affect the opinion of some Republican senators already uncomfortable with the President’s role in the Ukrainian affair.

Third, it is clear from the economic plight of Iran and the consequent eruptions of increasingly massive political protests in the country that President Trump’s policy of “maximum pressure” is working. Consequently, it will be reasonable for Washington to assume that the Iranian regime is in such dire straits that it will be forced to renegotiate the nuclear agreement and comply with at least some American demands in order to save itself. The prospect of such a scenario renders war with Iran redundant as far as achieving Washington’s objective is concerned.

It appears, therefore, that there are several factors concurrently at work in the US and Iran that act as restraining influences on both governments and rule out war as a credible option for the time being. However, while these factors may for the moment prevent a major conflagration they do not address the fundamental issues that underlie the adversarial relationship between Iran and the United States. These basic issues can be managed if not completely resolved only by painstaking diplomatic efforts and not by assassinations and tit-for-tat retaliation, which make diplomacy extremely difficult if not impossible in the long run.