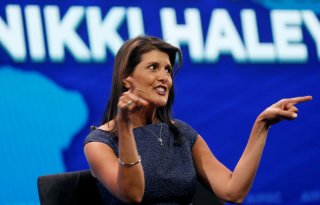 The specter of the International Monetary Fund (IMF) extending a loan to Iran to assist with the challenges of the coronavirus epidemic has raised objections from many U.S. officials. In an opinion article, Ambassador Nikki Haley argued that the United States should do everything in its power to block the IMF loan based on Iran’s policies in the region. Her arguments in favor of a political response to a public health emergency is typical of Trump administration officials and speak to a broader politicization with the lives of innocent people hanging in the balance. So is this an effort to block funds from an unruly actor or a cynical ploy to use the circumstances created by an epidemic for political gain as Iran has charged?

Some of Haley’s claims require addressing. First, despite her claim, the IMF is not a “subsidiary” of the UN. These organizations do not function as privately-owned corporate entities do. The IMF is an independently developed intergovernmental organization that is only part of the “UN System” because of a negotiated agreement between the two in which the IMF retains its legal independence including a separate budget, staff and decisionmaking structure. Second, the notion that they would provide a loan to Iran at the current juncture is also not an anti-American conspiracy. For decades now, the IMF has made a mission of extending financial assistance in the form of loans to countries experiencing public health crises. In this context, Iran requested a $5 billion loan from the IMF to better deal with the coronavirus crisis.

Haley’s problems with understanding the structure and roles of international organizations were readily apparent during her time in office as well as afterward. Haley uses her book, published in 2019, to make her dislike of Secretary Rex Tillerson very clear. She has a cabinet-level position and a direct line to the president. This, she feels, should mean that she is ostensibly an independent organ of the U.S. government wholly separate from the State Department—or a “free electron” as former National Security Advisor John Bolton called her. She has no interest in the State Department having any input in her staffing, policy positions, or formal statements. Her connection to Trump may be direct but it seems too irregular and unsystematic to be an effective mechanism of policy coordination between the American Embassy in Turtle Bay and the White House.

Haley twice claims that Tillerson, trying to head off her trip to International Atomic Energy Agency (IAEA) headquarters in Geneva, lied about having a team to look into the organization’s monitoring of the Iran deal’s implementation. She wanted to personally travel there to interrogate IAEA staff about the Iran nuclear deal that she vehemently opposed. Haley says that Tillerson told her that the trip is unnecessary as he has staff in Geneva meeting with IAEA officials on Iran related issues. She then writes that “I strongly suspected that Rex was making things up as he went along. I had heard nothing about his staff consulting with the IAEA about the Iran deal”. The State Department has an Ambassador-level Permanent Mission to the International Organizations in Vienna which includes the IAEA.

The Damage Caused by Sanctions

The argument laid out by Haley would be at least somewhat understandable if Iran had neglected public healthcare. But Iran’s healthcare system has been praised by the World Health Organization as one of the strongest in the region and the country’s life expectancy has jumped from fifty-four years to seventy-six years over the last forty years. That is simply not something that would be possible without significant and sustained government investment in public health.

The issue Haley completely neglects is that the damage inflicted by U.S. sanctions, not just on Iranian government finances but on the Iranian healthcare system, is at least an important reason why Iran felt the need to request the loan. I partially addressed these issues in a previous article on Iran’s coronavirus response. But medical researchers from around the world have tracked the negative effect of sanctions on almost all aspects of the provision of healthcare in Iran ranging from cancer care and pharmaceutical scarcity to mental health and antimicrobial resistance. Here are a few examples from just the past year: Researchers in the United States, the Netherlands and Iran concluded that sanctions have harmed the growth of Iranian medical science by denying access to critical laboratory and medical supplies, scientific fora, information sources and even the ability to publish research findings.

Researchers in Canada found that sanctions have had adverse consequences for public health in Iran, especially for low-income and at-risk populations, including by impairing the social determinants of health, delivery of health care and access to care. Researchers in Germany mapped the many direct and indirect ways in which U.S. sanctions have harmed Iran’s medical and pharmaceutical sectors, hamstringing their effort to confront the coronavirus, and add that the effect of sanctions will “compound human losses from the epidemic.”

Researchers in London wrote, the renowned academic medical journal The Lancet, that the efforts of Iranian healthcare workers fighting the coronavirus have been “thwarted” by shortages they directly tied to the “effect of sanctions on the commercial sector, reducing manufacturing and trade capacity, and on foreign exchange.” Researchers in Germany argued, also in The Lancet, that sanctions have destabilized Iran’s healthcare sector and added that “[s]anctions, a form of collective punishment, kill,” before calling the U.S. policy a violation of international law and “barbaric.”

This is why the United States was met with a flurry to calls to lift or at least amend sanctions by the United Nations, the European Union, the World Health Organization, the Vatican, former senior officials from the Clinton, Bush and Obama administrations, former heads of the IAEA and the North Atlantic Treaty Organization and many others. But in the United States, such international calls have little resonance. The U.S. government brushed aside the calls and at a State Department press conference just after these international demands hit a crescendo, the only Iran related question asked of Secretary of State Mike Pompeo from the assembled press corps was whether Pompeo feels “satisfied” with whether the UK, France and Germany are addressing “JCPOA violation.”

Some of the arguments made by the ambassador lack proper substantiation. The claim that Iran drained a strategic fund to send the money to Syria is sourced to two publications. One is an obscure Egyptian outlet that attributes the claim to “Iranian media” without citation. The other is an article from the U.S. government’s Radio Farda in which the outlet's “military analyst” makes this claim without evidence or explanation. When arguing that Iran has, in the midst of the outbreak, doubled the budget for the Basij, a military group under the IRGC’s command, she cites an article that explains that President Hassan Rouhani’s revised budget proposal has cut defense and security spending when adjusted for inflation and that the “Basij paramilitary received the most dramatic cut of all; its funding was cut almost in half.”

The former ambassador makes several claims that seek to downplay Iran’s need for such a loan. She claims, citing a State Department Facebook post, that Iran has $200 billion in funds. This claim seems to be, at least loosely, based on a controversial 2013 Reuters claim about the valuation of assets held by Iranian government foundations. Obviously, if one was to believe that Ayatollah Khamenei is simply sitting on $200 billion—or more due to appreciation of assets over years—then Iran’s fiscal outlook would be substantially shielded from the “maximum pressure campaign” and these efforts would be a pointless exercise whatever their stated mission.

Iran’s defense spending, according to the Stockholm International Peace Research Institute (SIPRI) was 2.3 percent of gross domestic product in 2019, well within the norm of global defense spending (2.2 percent of GDP for that year). Others have provided higher figures for Iranian military spending but they did so mainly by including the budgets of local police departments as defense spending. In fact, Anthony Cordesman and Nicholas Harrington of the Center for Strategic and International Studies said that Iran’s military equipment is “aging, battle-worn, and mediocre weapons that make it something of a military museum.” Iran’s military policy in the region is certainly not beyond criticism, but it is also not a financially intensive endeavor.

Ultimately, the issue here is not Iran’s expenditure of funds but rather its policies. For U.S. officials, past and present, to be professing concern for the stewardship of the Iranian people’s public funds strains credulity. Iran and its allies are the primary impediments to American dominance in the region behind its own alliance network consisting of Israel and Sunni Arab states. What U.S. officials frequently characterize as “adventurism” or “bad behavior” on the part of Iran is, for Tehran, a vital process of maintaining a viable alliance network and a critical security necessity that can’t be abandoned due to fiscal restraints.