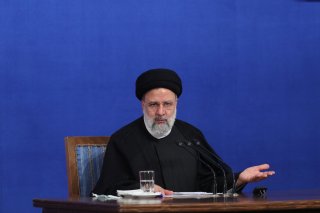 Iranian president Ebrahim Raisi claimed on Monday that Iran could not agree to a nuclear accord with the international community until the International Atomic Energy Agency (IAEA), the UN-affiliated nuclear watchdog monitoring Iran’s nuclear program, concluded its investigation into Iranian nuclear safeguards.

“Without resolving safeguards issues, talking about an agreement would be meaningless,” Raisi claimed at a news conference on Monday, marking the completion of his first year in office.

During the nuclear agreement’s renegotiation process in Vienna, Iran has repeatedly requested that the IAEA investigation be concluded or rescinded as a prerequisite to an agreement. Although Raisi’s comments to the press appear to reiterate this demand, experts have suggested that the Iranian side is open to a compromise regarding the investigation, including its incorporation into the agreement's text.

The IAEA’s investigations have been ongoing since before the start of negotiations when IAEA nuclear inspectors discovered trace amounts of nuclear material at three separate “undeclared” sites. Although the group has investigated those sites, Iranian officials have restricted the IAEA’s activities within Iran—including turning off several cameras monitoring existing nuclear sites earlier in the year—and IAEA director general Rafael Grossi has vowed that the investigation into the undeclared sites could not be closed without the “full cooperation” of Tehran.

Although the final text of an agreement between Iran and the “P5+1” is reportedly nearing completion, the issue of the IAEA’s inspection has remained a potential hurdle. An anonymous U.S. official told Reuters that Iranian negotiators could refuse to implement the final agreement unless the IAEA issue is resolved.

In addition to the nuclear issue, Raisi discussed Iran’s ongoing peacemaking initiatives with Saudi Arabia at his press conference, claiming that the two sides were discussing a series of commitments leading up to restored diplomatic relations, which were severed in 2016. Five rounds of talks between the two sides have been held in Baghdad, Iraq, and a scheduled sixth round is believed to have been delayed by the city’s ongoing political crisis.

The Iranian leader also repeated that he would not meet with President Joe Biden at the upcoming United Nations General Assembly session, which the two leaders are scheduled to attend at the same time. Raisi claimed that the meeting would “have no benefit for the people and interests of Iran.”